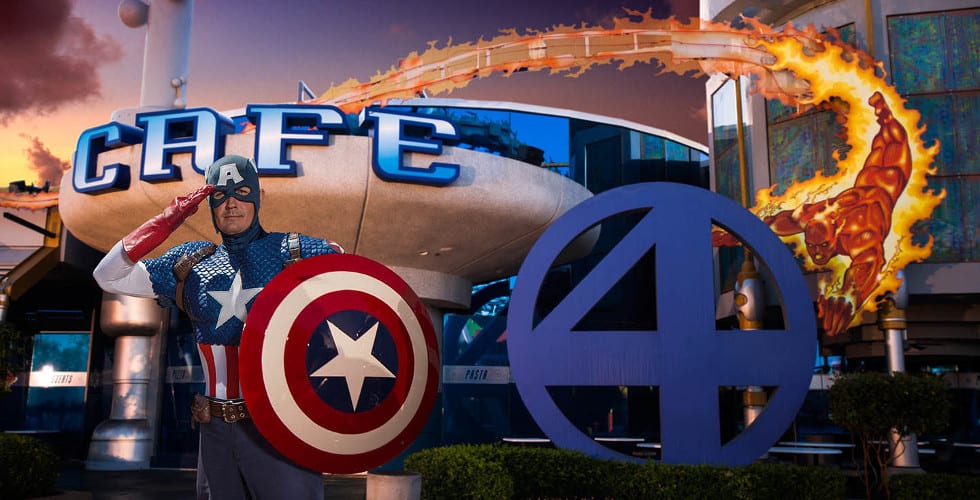 Share a meal with Avengers and X-Men at Universal’s new Marvel Character Dinner in Islands of Adventure.

Starting Dec. 9, Universal Orlando visitors can dine with the world’s mightiest superheroes during the all-new Marvel Character Dinner at Cafe 4 inside Islands of Adventure.

Located in Cafe 4 in Marvel Super Hero Island at Universal’s Islands of Adventure, this dinner buffet will feature Captain America, Spider-Man, Wolverine, Cyclops, Storm and Rogue. Each character comes to guests’ tables to sign autographs and take photos, and one digital photo from My Universal Photos is included in the experience.

The buffet, which features an entirely different menu from Cafe 4’s usual fare, starts with fresh salads like orzo and mozzarella and tomato. Entrees include roasted rosemary lemon chicken, shrimp scampi and chicken scallopini, along with Penne Bolognese, stuffed jumbo shells, specialty pizzas, and a selection of deserts.

This is Islands of Adventure’s first attempt at an ongoing character dinner. The park also offers a Grinchmas character breakfast during the holiday season, and until recently Universal Studios Florida offered a year-round Superstar character breakfast. Other character meals, mostly featuring Minions, can be found in the Universal Orlando Resort hotels.

All guests age 10 and older will pay $49.99 (plus tax and gratuity) for the Marvel Character Dinner, while kids ages 3-9 cost $24.99. Those prices do not include park admission, which is required. At this time, annual pass discounts do not apply.

Marvel Character Dinner will be available Thursday – Sunday, from 5 p.m. – 7 p.m. Reservations can be made online here or by calling (407) 224-FOOD (3663). And for more Marvel Super Hero action at Universal, watch these videos:

‘The Unofficial Guide to Universal Orlando 2021’...

Get a Coca-Cola delivered to you by...

Raise a glass to Bier Fest at...