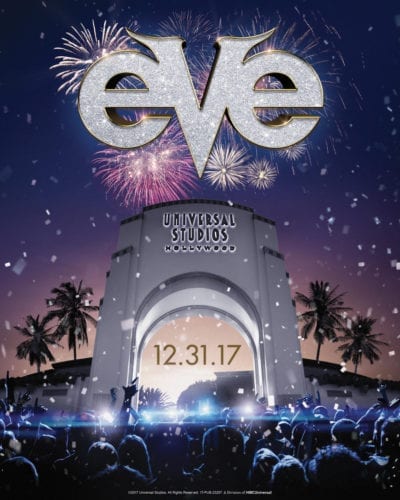 Party into 2018 inside Universal Studios Hollywood during the park’s first-ever EVE event.

A variation on Universal Orlando’s annual EVE party has been announced for Universal Studios Hollywood, as the California resort holds its first-ever in-park New Year’s Eve celebration on Dec 31, 2017.

Unlike the EVE hard-ticket party held at Universal Orlando’s CityWalk, the first-ever New Year’s Eve event inside Universal Studios Hollywood is included in the price of theme park admission. Guests may stay until an extended 1 a.m. closing time, with a special park-wide countdown party featuring multiple entertainment hubs with DJs and live music, starting at 9 p.m.

Universal Plaza, Simpsons Plaza located adjacent to “The Simpsons Ride” and an area near “Jurassic Park—The Ride” will transform into three themed party hubs that will culminate simultaneously at midnight with a traditional New Year countdown and a fireworks display.

Food and beverages, including specialty desserts, champagne, beer and wine, as well as 2018 memorabilia will be available for purchase.

Also on Dec. 31, guests can see The Magic of Christmas at Hogwarts Castle projection show several times each night, and celebrate the final day of “Grinchmas” with The Grinch.

For more information visit UniversalStudiosHollywood.com, and watch these videos of the park:

Join us for ‘Early Night Live’ at Disneyland for the holidays

Legoland Florida’s 2013 holiday celebrations to be...

Disneyland Resort celebrates the holidays with the...