Movie Review: Disney’s Oz is Great, and should be Powerful at the box office 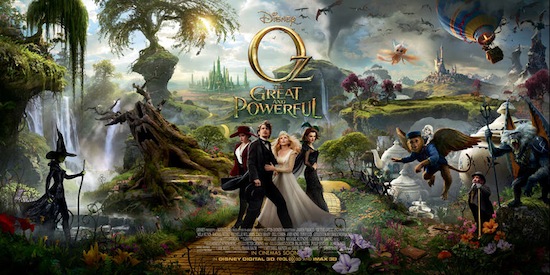 Even if you or your kids have never seen The Wizard of Oz movie or read any of the books, you’ll still love Disney’s new prequel to the original story, Oz The Great and Powerful.

The movie tells how Oz, AKA Oscar Diggs (played by James Franco), became the wizard. Even though the original Oz movie most of us know is copyrighted by Warner Bros., the original books by L. Frank Baum are in the public domain. So Disney’s story had to be based on the books, not original ideas from the original movie, such as the ruby slippers being ruby. But knowing that the original movie is what most people know about Oz, Disney walked a fine line. The beginning of the movie is one such time. 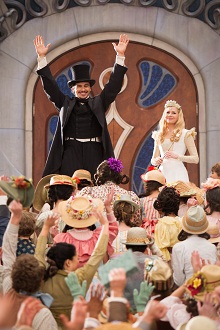 Like the 1939 movie, Oz The Great and Powerful starts out in black and white. It’s here we meet Oscar, a circus magician who fools people for a living. But he not only fools people for money, he also fools girls into falling in love with him, and he fools his “friends” into doing things for him, includng his assistant (played by Zach Braff). His antics soon get him into hot water and he ends up escaping via a hot air balloon, which get sucks into a tornado. If you know the original story, you know where that takes him, and this is where the brighter than bright full color, full screen adventure begins.

Most 3D movies are just as enjoyable in 2D, especially live action ones. But Oz really takes advantage of the extra dimension. Even the black and white scenes pop in 3D. And the smaller screen size in the black and white scenes lets the filmmakers perform some cool effects. All of the computer graphics are really well done. The land of Oz is full of even more “out of this world” characters and environments than you may remember. But they’re all believable and very lifelike.

Once in his namesake land, Oscar meets a witch named Theodora (played by Mila Kunis), but which witch is she? As you probably know, there are good witches and wicked witches in Oz. Theodora tells Oscar that he’s the great wizard they’ve been waiting for. So Oscar follows the yellow brick road with her to the Emerald City, where he hopes to cash in on his newly found fame.

Along the way he meets a winged monkey named Finley, who becomes his companion throughout the movie. In another nod to the original movie, and not the book, actors that play characters from Oscar’s life in Kansas also play different characters in Oz (Finley is voiced by Zach Braff).

The rest of the film involves two other witches (played by Rachel Weisz and Michelle Williams) and not only are their morals tested, so are Oscar’s.

Unlike The Wizard of Oz movie, this one is not a musical. In fact there’s only one scene with any singing, which comes to a hilarious end. Oz The Great and Powerful is also much more action packed than The Wizard of Oz film. It’s very much an adventure movie and may be too scary for young children.

The movie nicely answers many questions you may be wondering, such as, how is the land called Oz even before Oscar arrives? Disney also did a great job with making this prequel fit well with both The Wizard of Oz book and movie.

So whether you are a fan of the original Oz movie, the Oz books, or neither, you’ll love this new story of Oz The Great and Powerful.

Here’s the Oz-theme playground at Epcot for the 2013 Flower and Garden Festival:

For a look at some of the Oz merchandise for sale at Disney Stores and Disney’s theme parks, go to 22:32 in the March 7, 2013 Attractions Show: