I’m a huge fan of the Jurassic franchise, and have been looking forward to seeing the next film since the first Jurassic World film back in 2015. “Fallen Kingdom” takes the films in a whole new direction, and I’m sure fan reactions are going to be split. 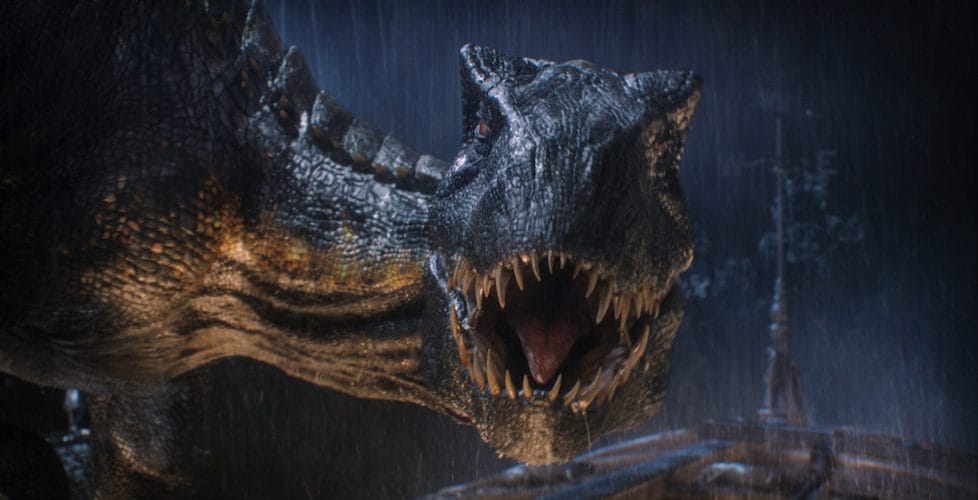 Just like “Star Wars – The Last Jedi”, half of the fans are going to absolutely love the new Jurassic Park movie and half are going to cry blasphemy and claim it ruins everything. I am personally part of the “OMG! That was so amazing and I can’t wait to see what happens next!” group.

Months ago I made a guess on where I’d like to see the franchise go, and somehow out of all the possibilities, the movie ended exactly the way I guessed, which only added to the enjoyment for me personally.

Many reviewers are calling “Fallen Kingdom” more of a horror movie than other Jurassic films, but I think the scare factor measures up about the same with the other installments. That being said, it does have much more of a horror movie aesthetic, with a majority of the film taking place in dark tunnels and a mansion.

Three years after the events of Jurassic World, Claire Dearing (Bryce Dallas Howard) is now the head of the Dinosaur Protection Group, an organization dedicated to relocating the Jurassic World dinosaurs to a safer place before Mt. Sibo on Isla Nublar erupts, causing another extinction of all the dinosaurs on Earth. She is contacted by Benjamin Lockwood (James Cromwell), John Hammond’s partner from the pre-Jurassic Park days, who has the funds and means to transport the dinosaurs to a new island, untouched by man.

To rescue the only remaining raptor, Blue, they need to get the help of Owen Grady (Chris Pratt) and return to the island to round them up before the volcano erupts and destroys the dinosaurs forever. Unfortunately not everything they’ve been told about their venture is true (What would a Jurassic film be without a little bit of sabotage and greed?)

“Jurassic World: Fallen Kingdom” is the beginning of something completely new. The film runs two hours, and is rated PG-13. There is a post-credits scene.

Guests can visit a Jurassic Park land at Universal Orlando Resort and ride the River Adventure and meet a raptor at Universal Studios Hollywood. Special food and merchandise offerings are now available to celebrate 25 years of Jurassic Park and the release of the new film, including the new Raptor Claw doughnut at Voodoo Doughnut in CityWalk Orlando and Hollywood.

The film’s raptor, Blue, is now meeting and growling at guests also on both coasts. See our video below.

Kids can now sleep in a Gyrosphere in a brand new Jurassic World Suite at Lowe’s Royal Pacific Resort at Universal Orlando.

On September third, Jurassic Park: The Ride, and it’s surrounding area at Universal Studios Hollywood will close to start a transformation into Jurassic World, set to open next year. See our video of the ride in Orlando below.

For another take on the movie, here’s our video review by Jeff DePaoli:

Ariana Richards, who starred as “Lex” in the original Jurassic Park movie, visited Universal Studios Hollywood on June 9th and surprised guests by posing for photos at the “Raptor Encounter” and riding “Jurassic Park-The Ride” one more time before it goes extinct on September 3, 2018.

‘IT’ and ‘Batman: Arkham Asylum’ come to life with Horror Made Here: A Festival of Frights at Warner Bros. Studio Tour Hollywood

What lies beyond those unventured doorways and paths...

My Jurassic Adventure – DePaoli on DeParks

A look at Universal Orlando’s Rock the...