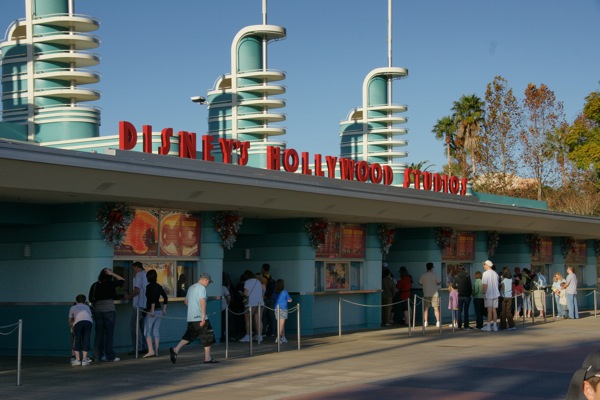 I was there for the opening this morning and it was business as usual. There was no fanfare or special announcements other than a brief mention during the usual opening rope-drop show.

The new park maps look largely the same except for the new logo on the front and a couple of small places on the map itself. I saw new maps sitting around and old ones. I saw some new signs and some that still say MGM. The largest signs weren’t up yet. One above the archway into the Animation Courtyard isn’t expected to be up until sometime in March. The Earful Tower is still all white. Surprisingly, no Hollywood Studios merchandise was for sale yet and they even had a few things left for sale with the MGM logo.

Changing all of the signs is a big undertaking and will happen over time. I saw a couple of cast members talking on their radios telling someone which signs had been changed and which hadn’t.

Look for a full story on the name change in the second issue of Orlando Attractions Magazine, which will be available by the end of the month.

I was going to e-mail your magazine about asking why as to Disney changed the name besides the reason that Sony bought MGM Studios. I for one would really like to know the whole story. I know on that movie ride, there were some animatronics and scenes of past and previously owned MGM movies, currently owned by Turner/Warner Bros. So I wonder if that was affected at all? If you know the story as to why, please tell about it.

Brian, please e-mail [email protected] with your question, full name and city and state and we’ll answer your question in our next issue.