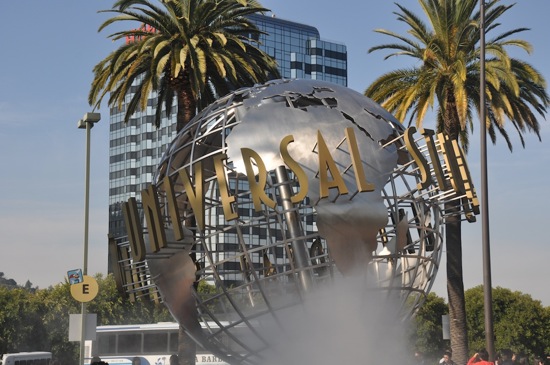 Readers of this blog are already quite familiar with the Universal Orlando Resort. Orlando Attractions Magazine regularly covers the latest happenings at Universal Studios Orlando and Islands of Adventure as well as Universal Orlando CityWalk. But this past weekend I took a trip to California and decided to check out Universal Studios Hollywood for the first time to see what it’s like to experience a “studios” theme park that’s actually connected to a real movie studio.

I only had general knowledge about the Universal Studios Hollywood before visiting, so I asked a few California locals for their opinions of the park in advance. The most common response I received was that I was going to be disappointed, so I went in with rather low expectations. But I came out with a completely different reaction. The park offered solid entertainment throughout the entire day and I had a genuinely great time.

So what can a past visitor to Universal Studios Orlando get out of visiting its Hollywood counterpart? Plenty. 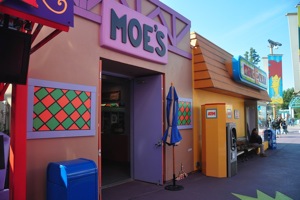 Before I get to all the wonderfully unique experiences to be found in the Hollywood theme park, I’ll mention the obviously similar ones to Orlando’s park. You’ll find The Simpsons Ride and Terminator 2: 3-D, which are nearly the same in both parks. Like in Orlando, The Simpsons Ride took the place of Back to the Future: The Ride, with the surrounding area turned into a slice of Springfield. Not only does Hollywood’s Simpsons area have a Kwik-E-Mart like in Orlando, it also features a facade of Moe’s Tavern, which is a nice touch. Terminator 2: 3-D is nearly identical in California as in Florida.

Shrek 4-D also exists on both coasts, but where Orlando’s version is shown in a somewhat small theater, the Hollywood version is displayed in a massive theater, holding what I’d say is at least four times as many people. As with The Simpsons Ride, there is more space devoted to Lord Farquad’s Duloc castle offering a wonderfully immersive experience.

In Hollywood, you’ll also find The Blues Brothers, Revenge of the Mummy, and Jurassic Park: The Ride. The Blues Brothers act is on an outdoor stage with seats rather than in the street like in Orlando. Revenge of the Mummy is an entirely different ride that emphasizes the roller coaster aspect more than the dark ride (though the opening dark ride-style scenes are still fantastic). Unfortunately, Jurassic Park: The Ride was closed for refurbishment when I visited, but I’ve been told it’s very similar to the Orlando version at Islands of Adventure.

And that’s where the major comparisons between Universal Studios in Hollywood and in Orlando end. Beyond a few of the same (or similar) attractions, it’s an entirely new and different experience visiting Universal Studios Hollywood, beginning with its location. 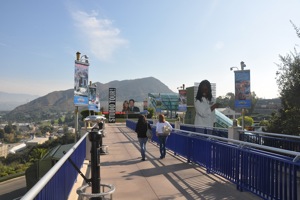 The drive to Universal City, where Universal Studios Hollywood is located, is unlike anything you’ll find in Orlando. Surrounded by mountainous scenery and movie-making history, Universal Studios Hollywood lives up to its Hollywood namesake. While you won’t catch a glimpse of the Hollywood hills from the park, which is closer to Burbank and Glendale than Los Angeles, you do get incredible scenic views that Orlando visitors can only dream of. From one vantage point, park guests can see the nearby movie studios of Warner Brothers, Disney and several others. The park also spans multiple levels, connected by an unusual series of escalators, allowing for a wide assortment of views. 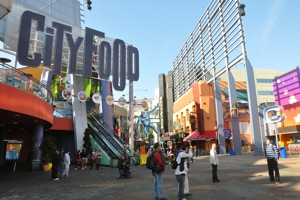 Like in Orlando, guests walk through CityWalk to reach the park’s entrance. CityWalk in Hollywood has the same vibe as Orlando’s version, but with mostly different restaurants and stores. Of particular note for me was the Dark Horse Comics store, where I would spend entirely too much money on collectibles if it were located in in Orlando.

After passing through CityWalk, the famous Universal Studios globe is spotted followed by the entrance archway, complete with a red carpet leading guests to the entrance. I arrived to the park just as it opened and as I passed through the turnstiles, I found an abundance of fun characters inside, including Beetlejuice, Shrek, SpongeBob Squarepants and Dora the Explorer. Throughout the day, characters were present quite often, as I saw Shaggy and Scooby-Doo, Groucho Marx, a couple of animals from Madagascar and a few others.

But my favorite use of recognizable characters was in an attraction called Universal’s House of Horrors. As a huge fan of Universal Orlando’s annual Halloween Horror Nights, this attraction was an unexpected treat. This roughly 10-minute walk-through experience offers a taste of horror movie history integrated into dark corridors that contain plenty of scares. Characters currently featured in the attraction include the Mummy, Norman Bates from Psycho, Chucky from Child’s Play, the Wolfman, Dr. Frankenstein and his monster (who gave me a good startle). While the overall experience isn’t nearly as detailed as a Halloween Horror Nights house, it is still very impressive for a daily theme park haunted attraction and I am rather jealous that there isn’t a House of Horrors at Universal Orlando. 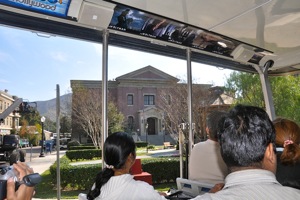 Outside the haunted walls, the biggest highlight of visiting Universal Studios Hollywood is the famous Studio Tour. This tram tour of the Universal Studios backlot lasts nearly an hour and is packed from beginning to end with incredible glimpses into movie and television history. The tour passes by rows of giant sound stages that are currently home to television shows like the original CSI and The Ghost Whisperer. Unfortunately, you can’t peak inside any of these soundstages while on this tour; you have to pay an additional $70 or so for the special two-hour version of the tour to do that. But there’s still plenty more to see on the one-hour version, including the endless acres of movie facades that include the Hill Valley courtyard from Back to the Future, a Roman area used in Stanley Kubrick’s Sparticus, the original Bates Motel and house from Alfred Hitchcock’s Psycho, and streets of “foreign” sets that can be made up to look like almost any European country. In addition to all of the movie history, the tram tour also features special theme park-style encounters with Jaws and an earthquake (both similar to the Universal Orlando attractions) as well as a few additional surprises that I won’t ruin here. All in all, the Studio Tour is nearly worth the price of admission to the park alone, especially if you’re a huge movie fan like I am.

The remainder of the attractions unique to Universal Studios Hollywood were entertaining, but not as memorable. Backdraft offers a similar experience to Twister in Orlando, replacing the tornado with a room full of huge fireballs and explosive effects. The WaterWorld stage show is Universal Studios Hollywood’s version of your standard theme park stunt show, though the water adds a unique element, as do the actors who 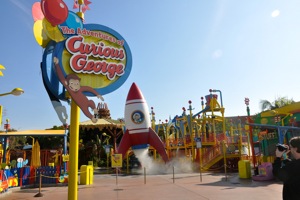 have each appeared in a number of popular television shows and movies. The Adventures of Curious George play area allows children to get completely drenched and is comparable to the Woody Woodpecker play area at Universal Studios Orlando. And if you’re short on time, the Special Effects and Animal Actors shows can be skipped without missing much.

I ended up spending the entire day at Universal Studios Hollywood, from its opening at 10 a.m. to closing at 6 p.m. and never once found myself without something to do or see. Even walking the streets offered entertainment, as different areas of the park transport guests to different places and time periods, from the old west and early 1900s Los Angeles to Great Britain and Paris.

But not everything was completely pleasant throughout the day. Most of the employees didn’t seem particularly interested in their jobs or in being particularly friendly. There were notable exceptions, of course, but most just seemed to be going through the motions. 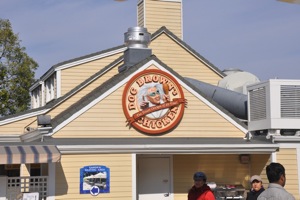 Food in the park is mainly your standard theme park fare, including burgers, hot dogs, chicken tenders and french fries. I ate only one meal there and couldn’t pass up the opportunity to dine at Doc Brown’s Chicken, which is something akin to taking a Kentucky Fried Chicken and replacing Colonal sanders with Dr. Emmett Brown from Back to the Future. If I had a Delorean time machine, I likely would go back and choose a different place to eat. For those looking for an atypical theme park dining experience, there’s also a Panda Express located within the park and plenty of other chain restaurants throughout CityWalk.

And if it’s thrill rides you’re looking for, Universal Studios Hollywood may not be the park for you. Revenge of the Mummy is the only fast-moving ride in the park. Jurassic Park is a slow-moving boat ride with a large drop at the end and The Simpsons Ride is a motion simulator. The Studios Tour, of course, is technically a “ride” but it’s certainly a slow-moving one.

In the end, I highly recommend a visit to Universal Studios Hollywood to any fan of Universal Orlando or of movies in general. The unique attractions coupled with the one-of-a-kind glimpses into movie history make for an unforgettable experience. If you’re planning a trip to the Hollywood park, make sure you wait a few months for the King Kong addition to the Studio Tour to be finished. It’s due to open this summer. It’s replacing the old King Kong portion of the tour that fell victim to a major fire that swept across the backlot more than a year ago. And if you can wait a couple of years, you’ll also get to experience a brand new Transformers attraction. I’ll definitely make another trip to Universal Studios Hollywood.

KC, LeAnn or Dennis – Three top musical acts to choose from this weekend

I heartily agree with your review, Ricky. I would just say, the Warners tour is very nice as well. No rides, but you’ll see a lot of familiar settings from your more intimate 12 person tram ride.

Universal Studios Hollywood may be very good, but it will never be as wonderful as UNIVERSAL ORLANDO RESORT!! There’s no comparison! I absolutely don’t care that over there they actually do movies, I care about the dimensions of the theme parks!
Nice article thought!

You’re right that the whole Universal Orlando Resort can’t compare with a single theme park in Hollywood. But my perspective of the park definitely came from the fact that I’m very interested in the behind-the-scenes aspect of movie-making, so it was great to see all of the historical sets, props, and sound stages. You can’t get that in Orlando.

Yes, I understand that, indeed I’m going soon to check out US Hollywood, the only thing I wanted to point out is that in Universal Orlando Resort has been a way more successful theme park destination… But again, thanks a lot for the photos and the article, because now I know where to go on my first visit to USH! I’m especially interested in the Studio Tour, which seems A LOT BETTER than the “Studio Tram Tour” of Disney’s Hollywood Studios”…

Too bad Conan’s The Tonight Show is no more as it would have given an extra kick to the tram tour. I recognize a few of those sets from his show (the 20th photo is where he blew up a car). Plus, he used to interact with the tours every now and then.

I wish Universal Orlando would take the old Hard Rock Cafe building behind the woody coaster and make a permanent Haunted attraction. Please use your insider capabilities to put that bug in someone at Universal Orlando’s ear.