Out of the Loop: Are roller coasters the secret to agelessness? 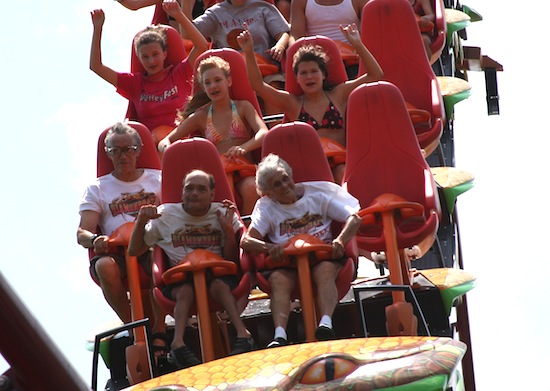 So what’s the secret to good health into one’s 8th decade of life and beyond? Is it eating right? Staying off the booze and cigarettes? Exercise? Apparently for one 88-year-old, the answer is frequenting an amusement park and hopping on her favorite coaster. In this case the park is Kings Island near Cincinnati, Ohio and the favorite coaster, The Diamondback.

The Bollinger & Mabillard designed Diamondback was added to the vast stable of Kings Island coasters in 2009. The 230-foot-tall coaster reaches speeds of 80 miles-per-hour. The coaster received a thumbs up from many coaster enthusiasts and made many “best of” lists in its first year. This coaster is indeed one of my personal favorites because of its crazy-smooth speed, high heights, and that “wow, I’m flying” feeling!

Thelma Gratsch decided a good way to spend her 88th birthday was in the front seat of the Diamondback. Was this a one-time deal? No! The season passholder has been to the park 23 times this year alone.

Well, Thelma, happy birthday to you and many more and thanks for showing us the secret to a long and exhilarating life!

New Wizarding World merchandise available at the park and online

You can own a piece of The Racer...

The Beast at Kings Island getting track refurbishment...