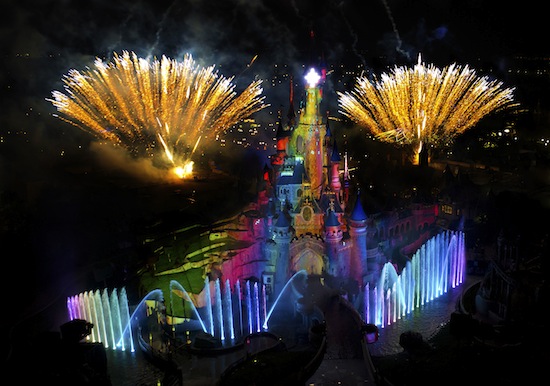 Paris, France – Yes, it was in April 1992, 20 years ago, that Disneyland Paris opened as “Euro Disney Resort”. The name was changed to Disneyland Paris Resort in 1994. After initially falling below projected attendance numbers, the park and resort saw its first quarterly profit in 1995. A second theme park, Walt Disney Studios opened in 2002. The resort now boasts seven hotels and a “Disney Village”, which here in the States we refer to as Downtown Disney. More recently, Toy Story Playland opened in the Toon Studio area of Walt Disney Studios Park in 2010 becoming the first Toy Story themed area in any Disney park worldwide. 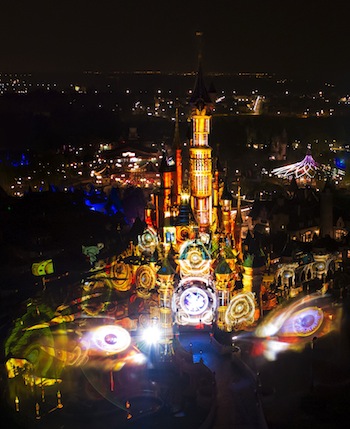 So how does Disney celebrate 20 magical years in Paris? Well, with a party of course! One of the centerpieces of the celebration is the Disney Dreams nighttime show that debuted on April 1, 2012. The show draws upon what Disney has pioneered in nighttime shows and rolls it into a single new show. The show includes pyrotechnics, i.e. fireworks, something that Disney has done for decades. Shows such as Epcot’s Illuminations: Reflections of Earth utilize lasers, a technology used in Disney Dreams too. The show incorporates “water screens” with projections first used in Fantasmic and now in the spectacular World of Color at Disney California Adventure. The show uses images projected on building surfaces. The façade of ‘it’s a small world’ at Disneyland in California has featured a holiday projection for years. Now, that same Small World face along with Cinderella Castle at Walt Disney World serve as the backdrop to The Magic, the Memories and You show. More than simply projecting an image onto these buildings, a special technique is used to digitally map the surface in order to project what looks like a flat image on a non-flat surface. Disney Dreams brings that technology to new levels.

What Disney seems to do so expertly in these productions is to weave a story that draws from the Disney well of great stories and characters in ways that make us laugh, cry, be frightened and ultimately warm the heart. It is this content that is big enough to not be overshadowed by the technology. Disney Dreams follow this formula perfectly. In Disney Dreams, Peter Pan rediscovers some of the most loved Disney stories including Beauty and the Beast, The Hunchback of Notre Dame, The Lion King and Rapunzel. During the show, the castle is transformed into a starry sky, Notre-Dame Cathedral, London rooftops and many other things.

If you are like me, living here in the States and do not have that Disneyland Paris trip planned, attractions like this help us to think – some day.

Here’s a look at some new things Disneyland Paris has going on for their 20th year, including a look at the making of Disney Dreams:

Here’s a preview of the show. It starts about half-way through: