The Wizarding World of Harry Potter is the largest success Universal’s Islands of Adventure has had since the park first opened. Now, this mystical world is being expanded in a big way with the addition of a brand new, highly-themed roller coaster. This photo report, with shots provided by our contributor, @bioreconstruct on Twitter, oversees the current construction going on at the Wizarding World.

The Wizarding World of Harry Potter is so big that it spans two parks at the Universal Orlando Resort! On the right is Universal’s Islands of Adventure, on the left, Universal Studios. These two parks are connected with the Hogwarts Express, a park-to-park train that allows guests to magically be transported from Diagon Alley to Hogsmeade, and vice versa. 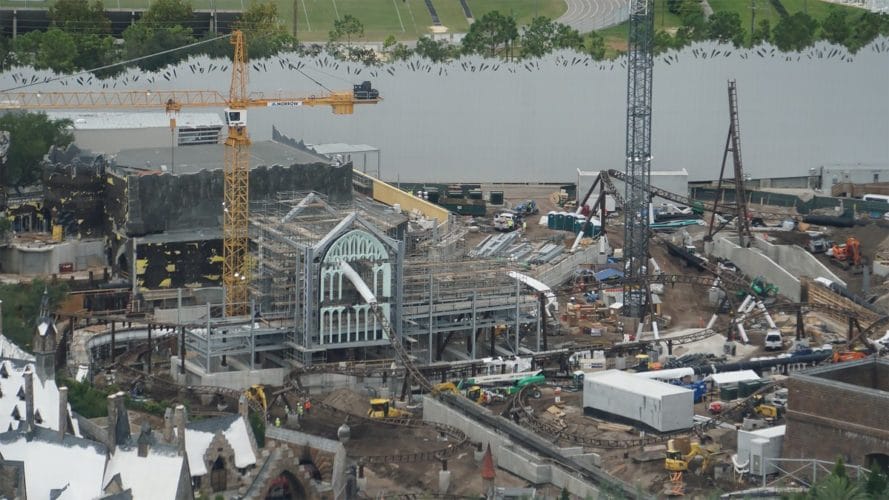 Over in Hogsmeade, construction on this new highly-themed roller is well underway. Rumors suggest that it will open late fall of next year, around the same time as Star Wars: Galaxy’s Edge at Disney’s Hollywood Studios. The main area of focus is the new stone facade being put up in the center of the construction. 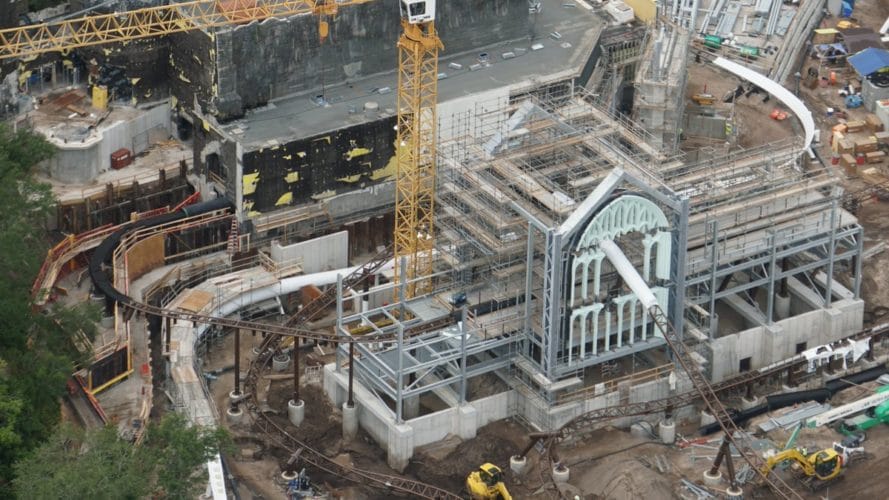 It now seems highly likely that this building will be fully enclosed, minus the entry and exit points of the coaster itself. Based off its current architecture, there has not been a definitively agreed-upon guess as to what this structure may be. If you think you may know what this structure is resembling from the Harry Potter films, please respond below in the comments. 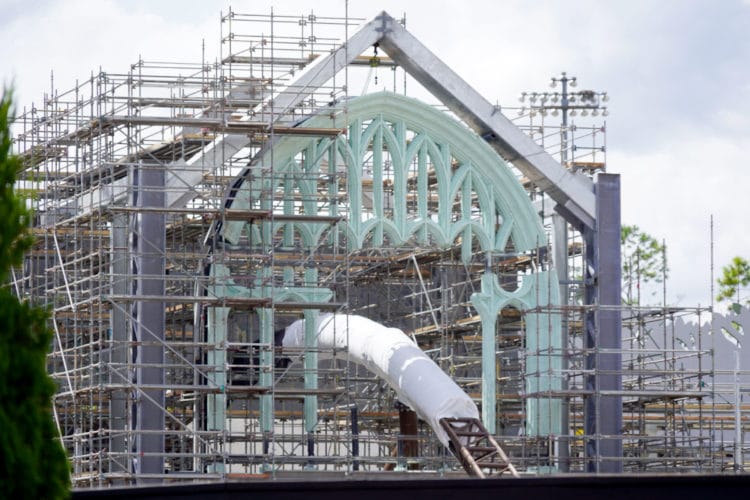 The facade looks just as good from inside the park as it does from the sky. Whatever this building may be, it is our first clue into the level of theming we can expect from this upcoming attraction. 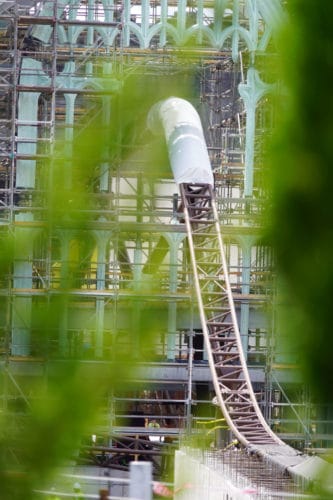 This look, from inside the park, is one of the only areas still visible to guests. Along with the secrecies of this coaster, Universal is doing a very good job hiding the construction from day guests. Thankfully we know a Bioreconstruct to get us in-the-air photos. Part of the track is covered here to protect it from possible falling debris from the construction above. 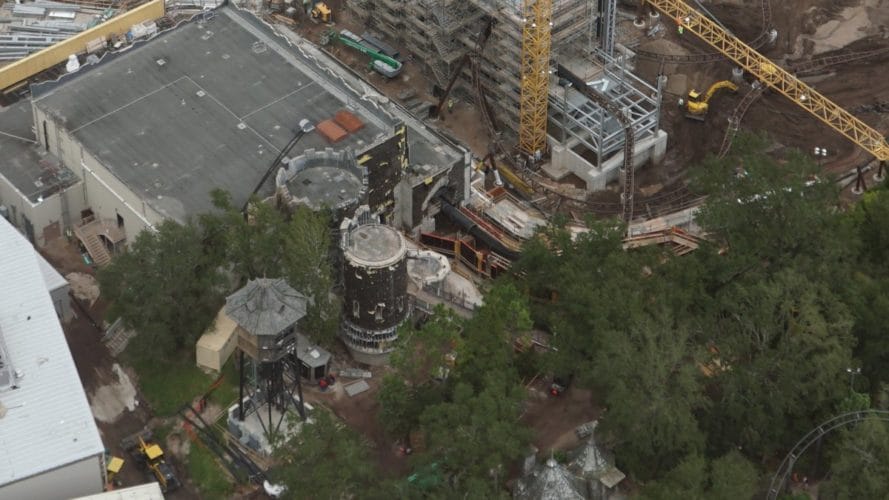 Elsewhere in the construction, we can see the attraction’s entrance. Not much has changed since the closing of Dragon Challenge. The facade itself seems in a rough shape, but surely we will see a new or updated exterior after more of the major coaster track construction is complete. 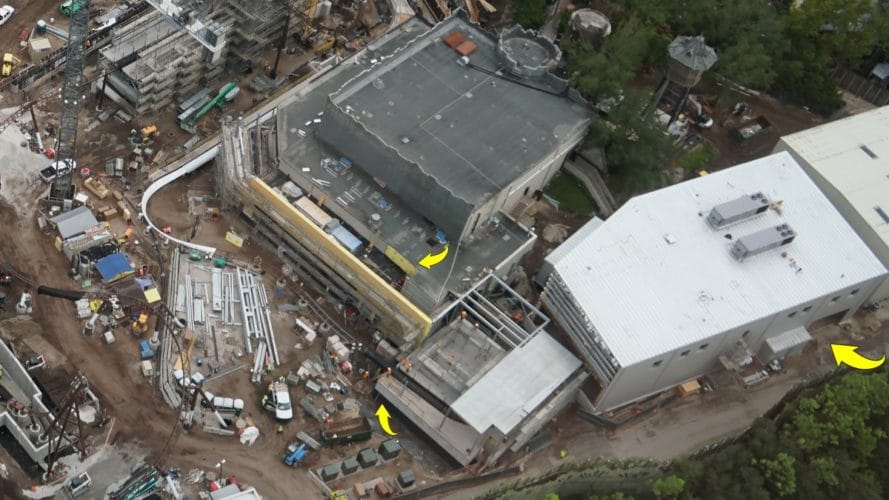 Our first two smaller arrows point towards workers focused on the main building expansion. On the right side, you can see the recently constructed maintenance building. This huge structure was put up fairly quickly. Best guesses would say that this will be finished first and will house the ride vehicles prior to track testing. 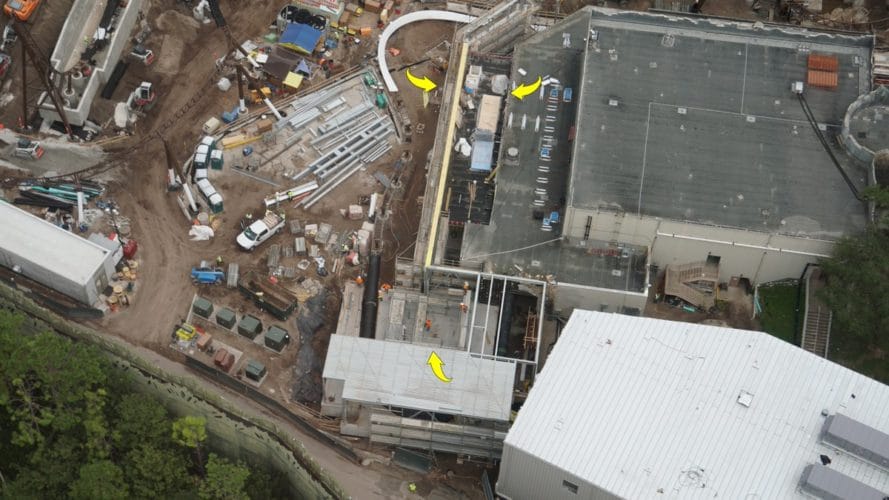 This angle shows a different look at the building expansion. Arrows are all pointing to relatively new areas of construction for the building’s expansion. The final turn, bottom arrow, will send ride vehicles into the maintenance building or the main load and unload area. 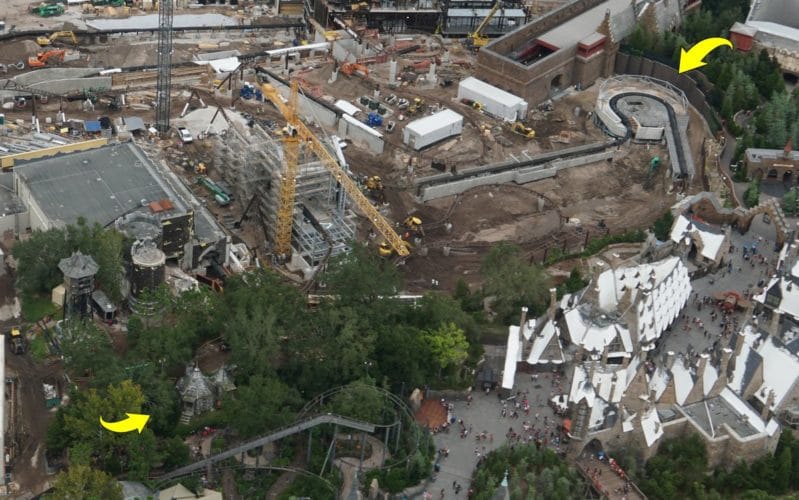 The arrow in the top right is pointing to a structure that has been of high interest since the coaster construction first began. It is rumored to house a large animatronic. Since this coaster’s theme was originally rumored to be about the Forbidden Forest, some referred to this round structure as Hagrid’s Hut. You can see the current version of Hagrid’s Hut at the arrow on the bottom left. 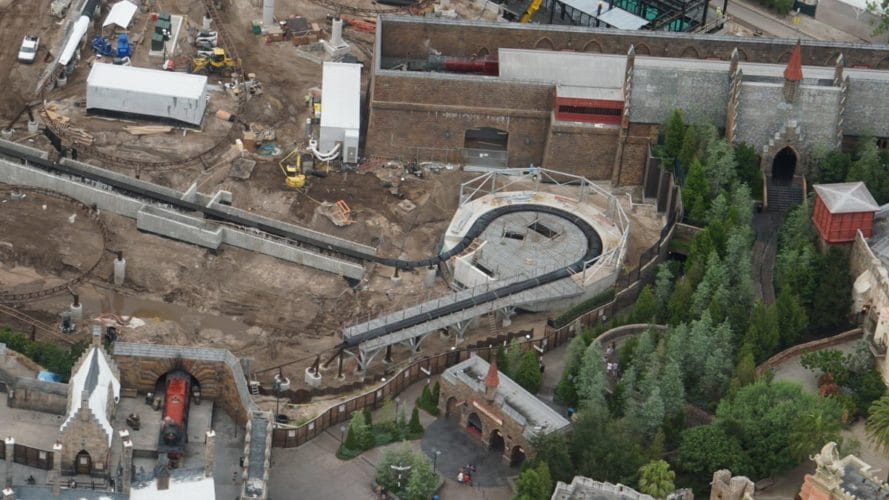 This closer image of the round structure shows that new walls are going up. Because of the close proximity to the Hogwarts Express exit and entrance, it is presumed this building will be highly themed. The two large rectangles in the center are most likely the “feet” of the animatronic(s). This could allow for a quick indoor scene that could set up the launch track afterward. 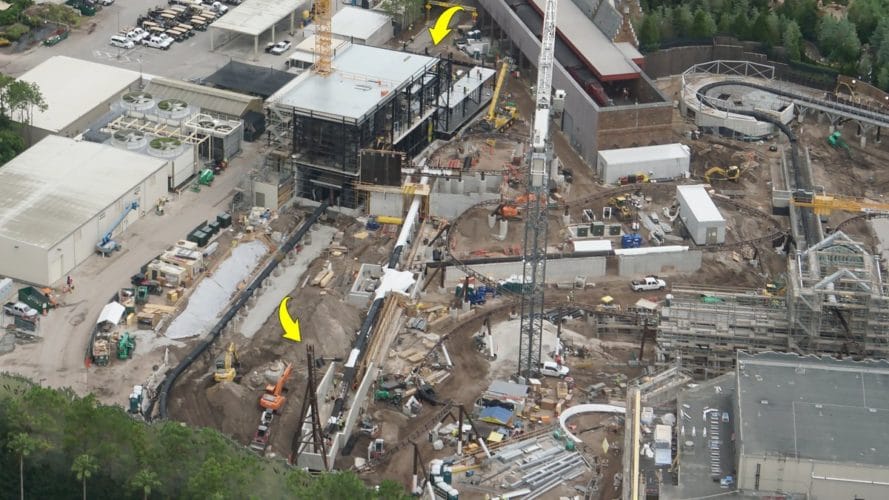 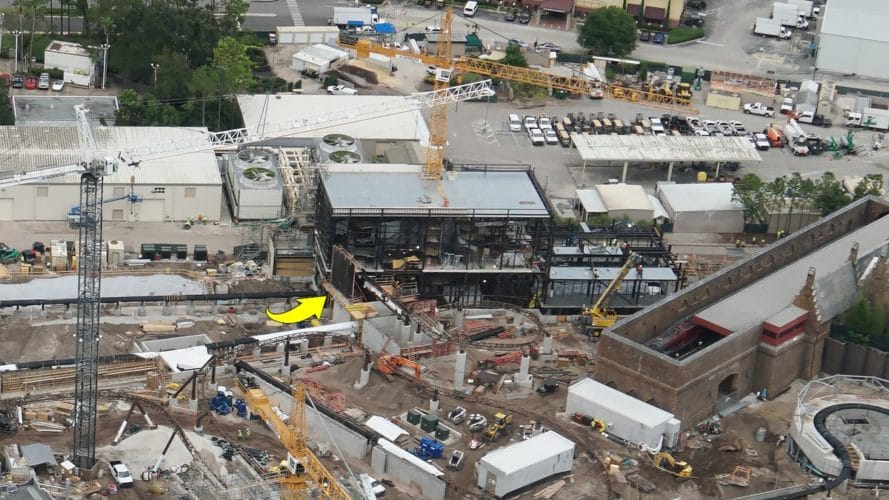 Looking at the elevator/drop track building we can see a complex amount of steelwork going on inside the building. The arrow points to the newest section of concrete construction. This may be extending the building out a little built, or could simply be a wall on one side of the track for a quick fly-by of theming. 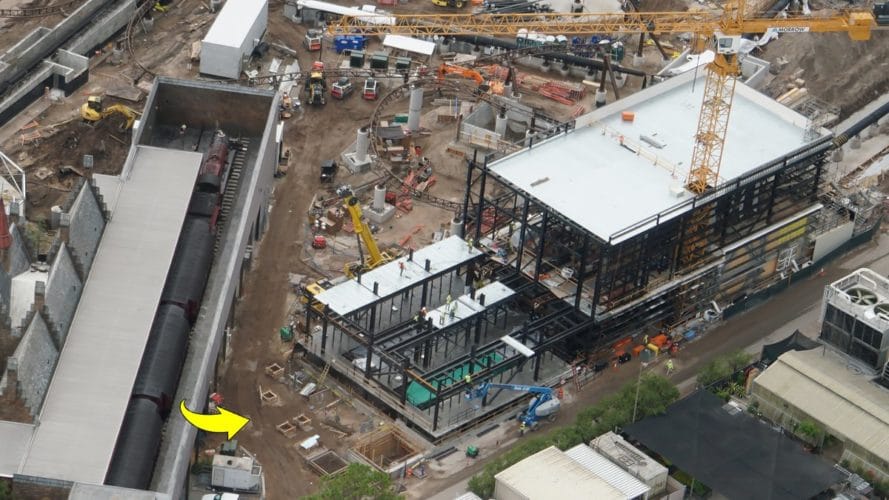 The arrow at the bottom left points to small areas of new construction. With no track in the area, nor visibility from a guest area, this minor construction will probably just be technical or backstage construction and will not be part of the storyline of the attraction. 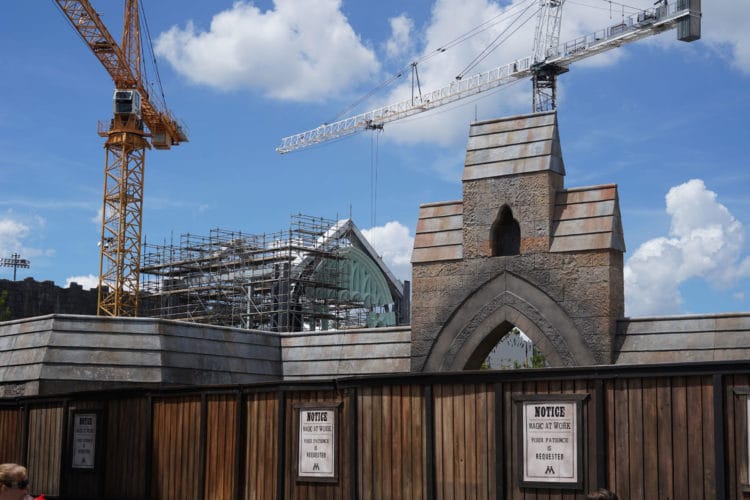 We still have a while before we can enjoy this next journey into the Wizarding World of Harry Potter. But, until then, keep an eye out for more articles like this! Please note, everything stated so far is theory and guesses. Until officially announced by the Universal Orlando Resort, nothing is official.

To learn more about this upcoming roller coaster, check out these articles.

Rock the Universe dates and headlining acts revealed for 2019

Ahh, very true. Now we must eagerly await for Universal to reveal something, or wait for more progress on the construction. Either way, it’s lookjng magical!

Honestly, the more I look at it, the less it looks like the Forbidden Forest. With all the surrounding structures in place, and with the buttress work on that façade, that building looks more like it’s part of the castle itself. Heck, I’m starting to think this whole ride’s centered on an area of the castle grounds that just isn’t visible from Hogsmeade. I mean it could still come out to the entrance of the Forbidden forest, but the visible parts of the track are sandwiched between all these show buildings, and the ride itself seems to swing pretty close to a lot of the existing facades. Short of them littering the area with about a thousand trees, it might be time to re-evaluate some of the standing rumors/theories.

I agree with you that the idea of the forbidden forest is getting less and less plausible. I also love the idea of it possibly being in part of the castle’s courtyard! Now we wait for Universal, or until another piece of the puzzle arrives.

It could be the bank from Fantastic Beast…could be a creature themed ride….thats my thoughts.

Thanks for the guess. I had figured the more construction we saw the easier it would be. But, it’s anyone’s guess right now..

Yeah my best guess is the bank from Fantastic Beasts. Was the first thing I thought of when I saw it. Would be sick.

It looks a bit like the Great Hall from the outside? But Hogwarts is up on the hill…

Wow. I cannot believe that others think it looks like the bank from Fantastic Beasts. It was my very first thought as well, but I thought others would think I was crazy if I suggested that. Got to be one of my favorite all time movies ever, so this concept would be AMAZING! And there are plenty of possible creatures that could feasibly go in that supposed animatronic structure. Bring it!

It’s almost certainly the giant window from the great hall in Hogwarts: https://www.notyourmotherscookbook.com/images/greathall-candles-film.jpg – while it’s not located at the Hogwarts castle in the park, the theming of the ride may be intended to give the illusion that riders are in the castle – at least for a bit – until “crashing” through the window, out into the grounds of the castle (and potentially through a bit of the Forbidden Forest). The inclusion of what appears to be Hagrid’s Hut would support that.

Room of Requirement exit out to the grounds. Whomping Willow animatronic.

I think they will expand the structure of Hogwarts and that what we see is an exterior shot of the windows you see behind the teachers table.

I think if it isn’t the forbidden forest, it’s a coaster through the great hall; maybe Fred and George’s ride through the school when they show up Umbridge? Or Quidditch ride gone while. I think it’ll have something to do with riding a broom. Fantastic Beasts doesn’t make sense in Hogsmeade at all, sadly. Kind of wish they could extend the wizarding world to the New York section. That’s where the bank ride idea would be perfect. PLUS add a Kawalski’s Bakery?

The whole thing reminds me of when Harry took on the dragon in Goblet of Fire; I think the ride is that little adventure.