Universal Orlando has so far been very secretive about their upcoming Harry Potter themed roller coaster. Maybe they want to keep some extra magic up their sleeves? This photo report, with shots provided by our contributor, @bioreconstruct on Twitter, oversees the current construction going on at the Wizarding World. 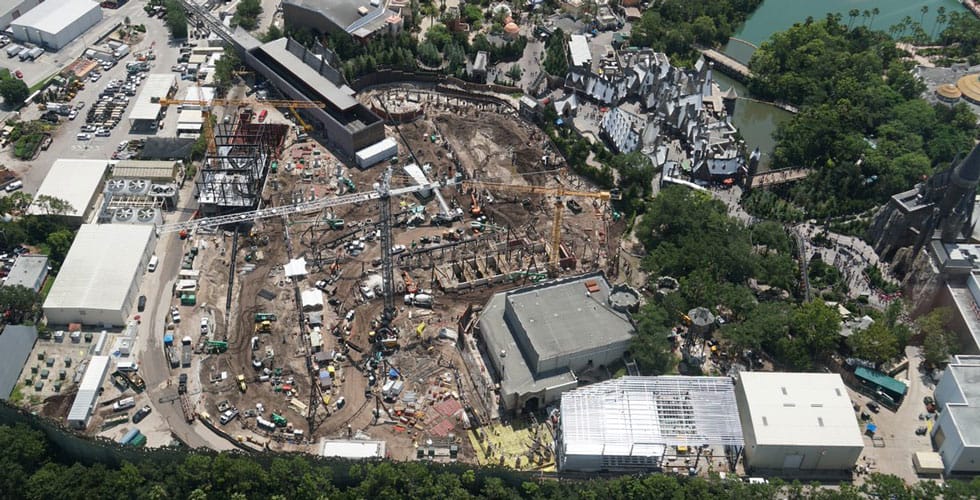 This coaster will span an enormous area, allowing for a long coaster with numerous types of track and experiences. 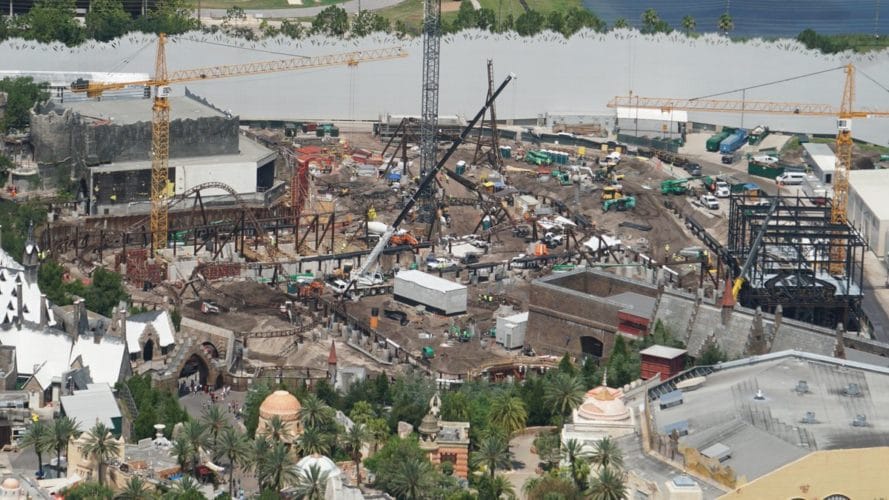 Taken from the opposite angle, it is easy to see the drop track piece, and visualize how large the drop track/elevator show building is on the right. More on those later. 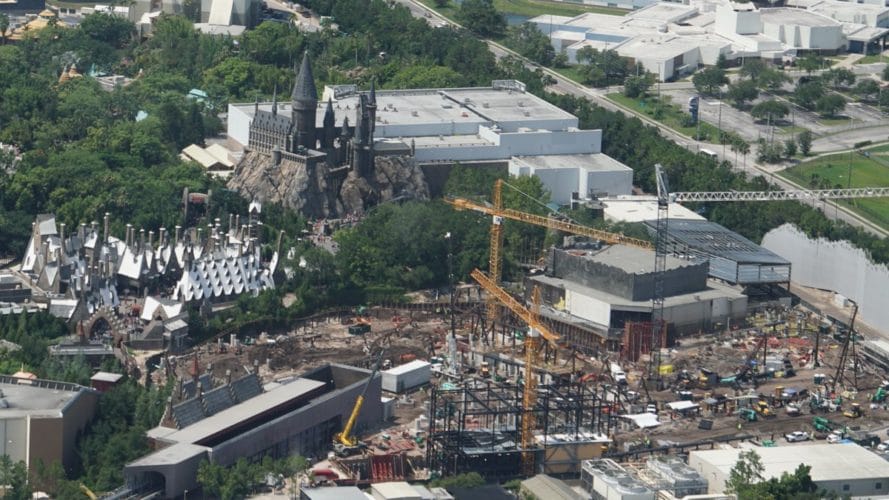 With a construction project this large, it is nearly impossible to hide all of the work and equipment, so we also went inside the park to get some photos from the guest view. 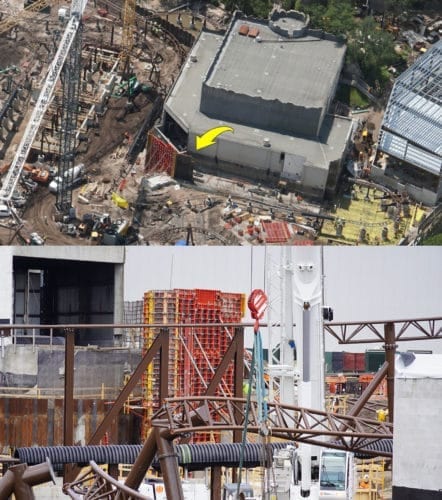 These concrete wall structures are one of the newest focus areas near the main show building. Since we can see the track curving already inside of the building, it is currently unknown why this expansion to the building is happening. 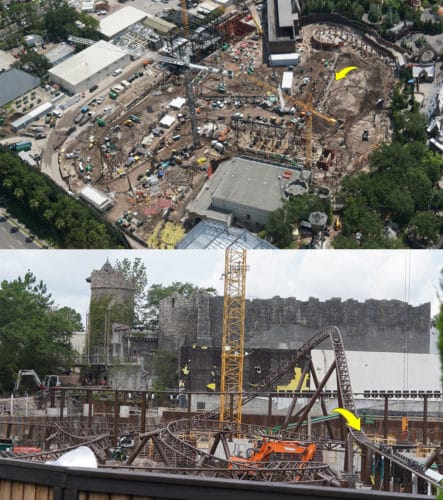 This detail may seem small, but it has actually caused me to re-think everything about the track layout of this coaster. These magnetic pieces can be used for numerous reasons. They can be used as magnetic brakes, using fins on the coaster vehicle to slow it down. But, it can also be used for magnetic propulsion. That’s why this tiny detail has made me think, have we been thinking about the coaster backwards the whole time? 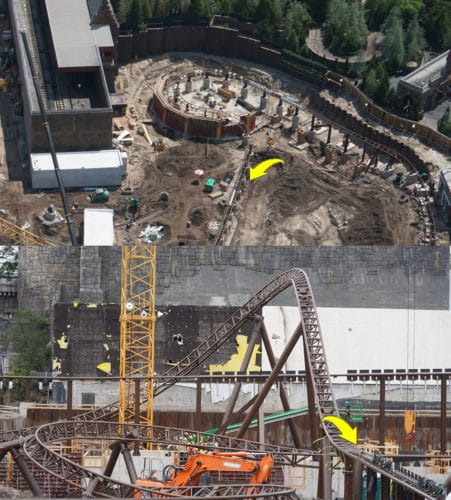 If we are willing to flip what was originally thought as the direction of the coaster, then perhaps these magnetic pieces are the launch to the ride’s first hill. That would mean guests would pass by Hogsmeade first, and then encounter the rumored large animatronic. This would give reason for the sudden escape, and would set the ride off. 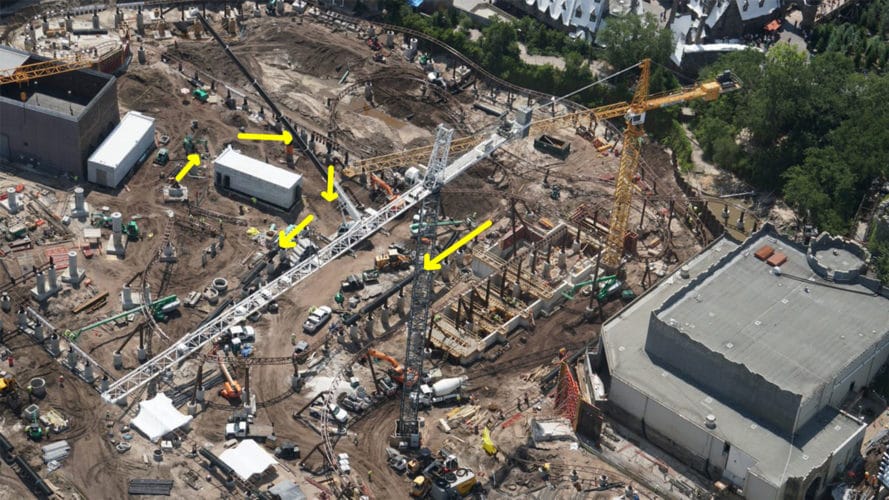 If this theory is correct, this possible ride layout would relaunch guests into numerous large banked turns. They would then head to the covered white track on the bottom left. 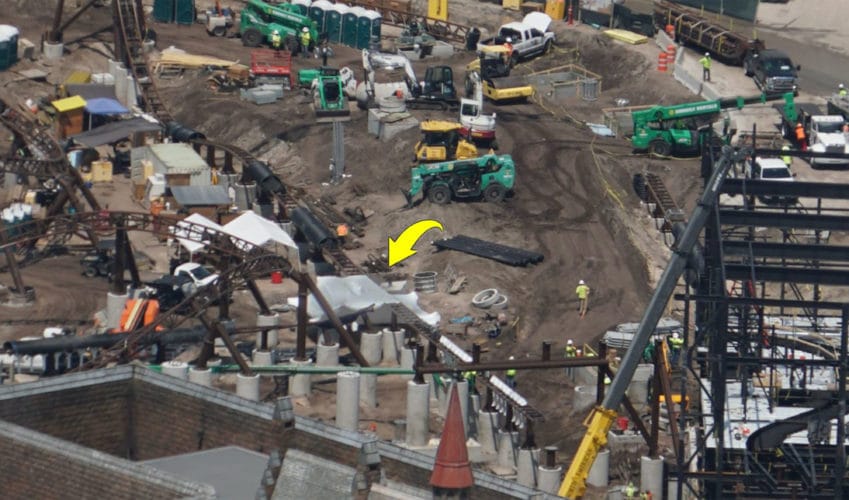 With a close eye, a track switch piece can be seen. If the ride direction is correct so far, then this would mean guests would continue from the large animatronic, up the first hills, through the crazy turns, around two large banked turns, and straight towards the dead end of the track. They would then fall back, and come to a track piece that allows them to continue backwards into a large 270º (ish) turn towards the drop track/elevator show building. 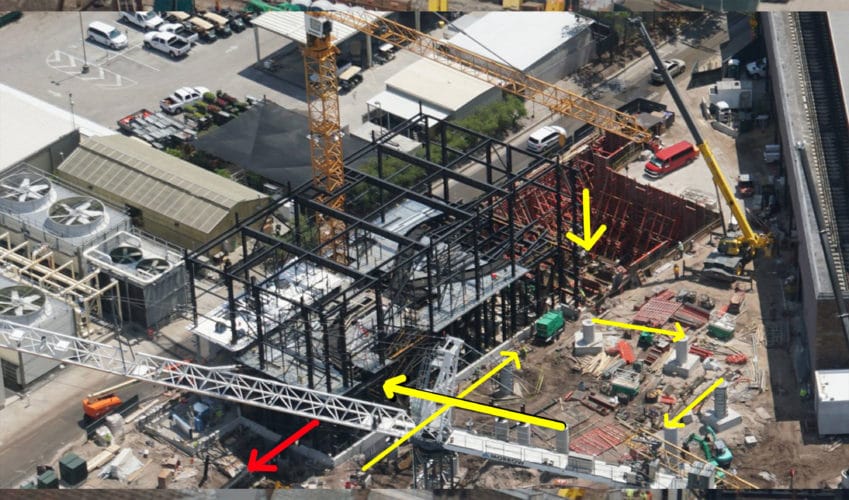 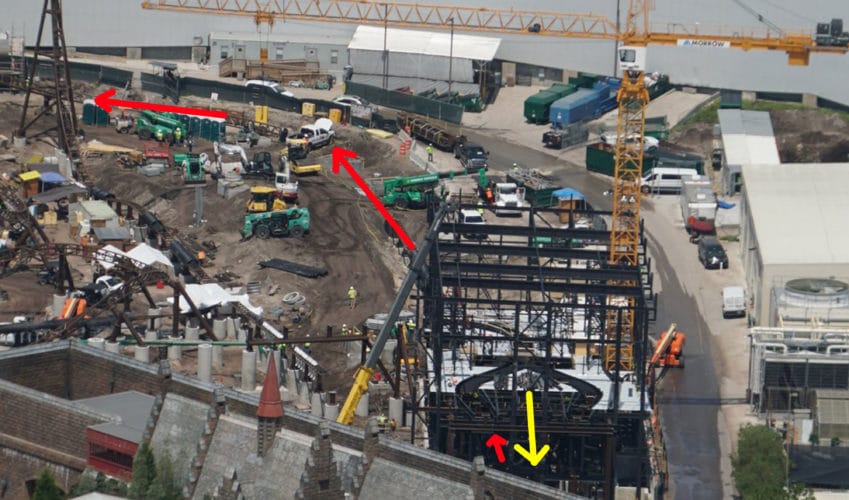 Assuming this is correct, the drop track would be the last major screen or animatronic element that we can currently see being built. This last launch would take guests around the drop track piece, and over to the last sweeping turn. 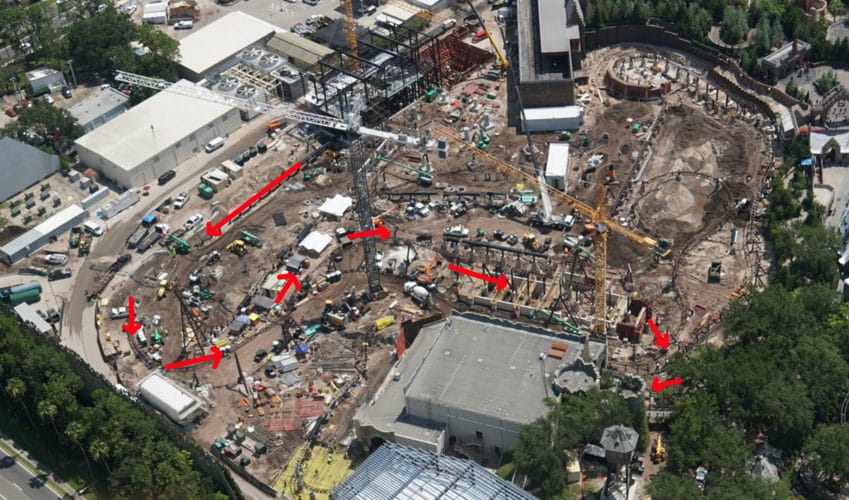 This sweeping turn would go to a long straight-away that could be a brake area. This area is also surrounded by a concrete foundation, suggesting this track will eventually be covered up in its own show building. Guests would then take a relatively slow turn back into the main show building. 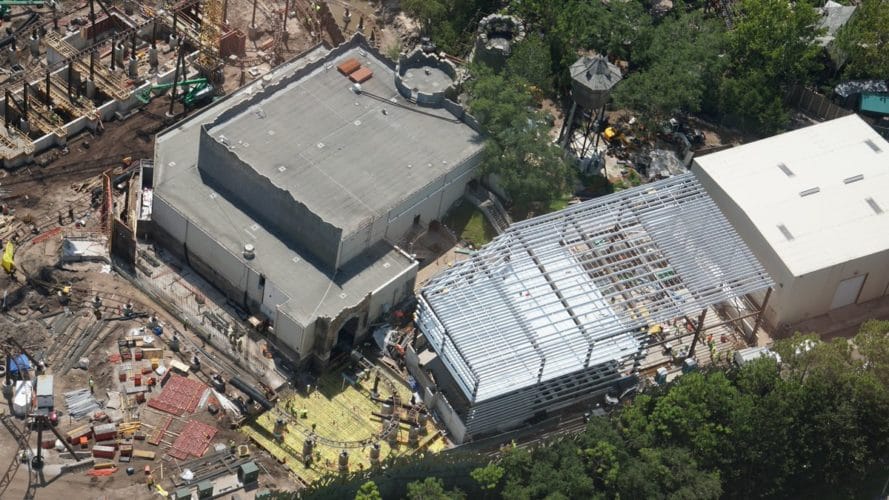 Now, while all of that is plausible, one major flaw does fight against this theory. Atop the large yellow area is a curve, which contains a switch track. This switch track will allow the vehicles to be sent into the large maintenance bay being built. The curvature of the track seems to only allow vehicles to enter from one direction, the opposite direction of this theory. 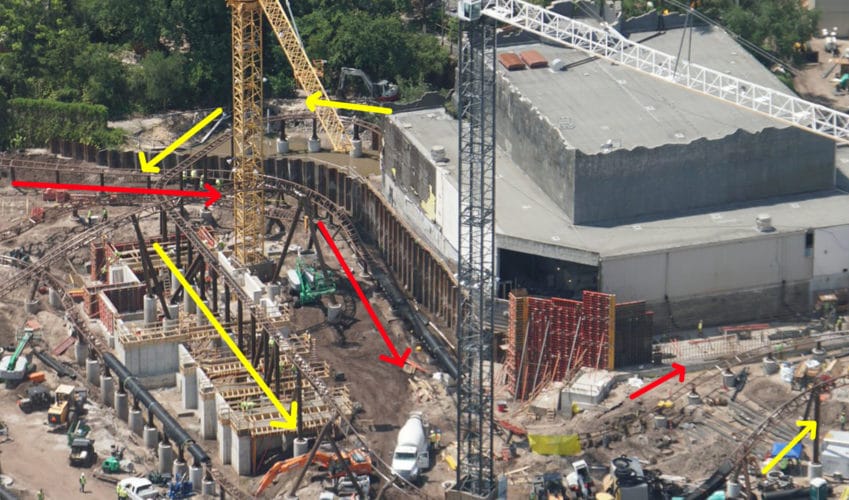 If that theory is wrong, and the coaster is going the original direction it was rumored to, then this is the correct path to and from the main show building. Yellow would be the beginning, as riders enter the long, possibly enclosed building. From here they would be launched to the large turn around the drop track. They would ride an elevator up, and this would taken them to the large 270º (ish) turn. They would be launched into the drop track, and fall back into the large banked turns. Banked turns into a launch as guests head towards the crazy turns, up the final big hill and into the large animatronic room. This would launch them one last time past Hogsmeade, around the show building, and finally end. 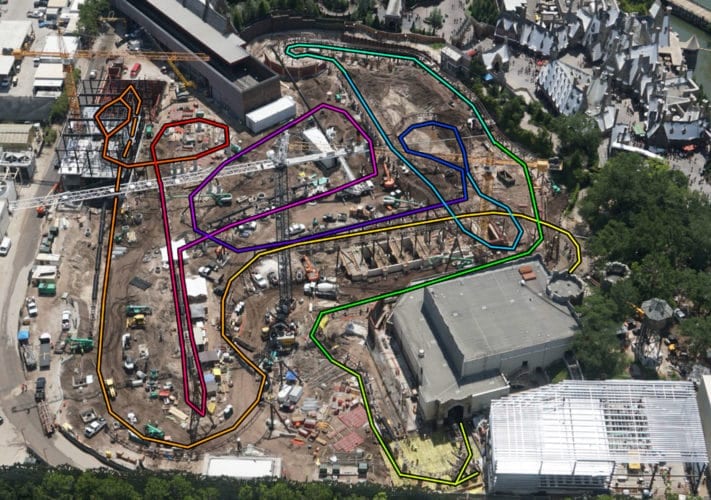 Whichever way you believe the ride may go, this is our best guess at the exact layout of the track. The ride could, as this theory proposes, go green-blue-purple first. This would make the large rumored animatronic first, and the straight-away last. Or, it could go yellow-orange-red first. This would make the straight-away the first major ride element outside the show building, and it would mean the ride ends with a few hills next to Hogsmeade, before a turn around the show building. 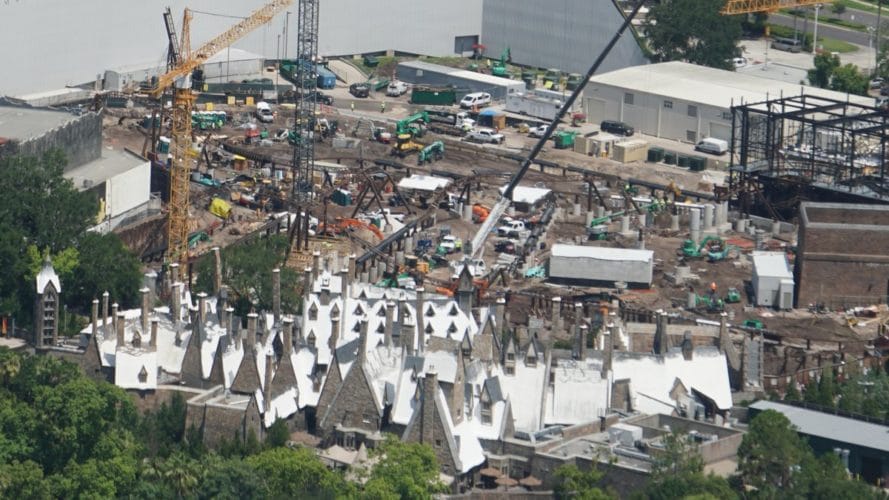 For now though, the best we can do is guess. It is safe to assume this is a major addition to the Wizarding World, and may quickly become a Universal fan favorite. The custom pieces, unique track layout and ride size all equate to a new major attraction. 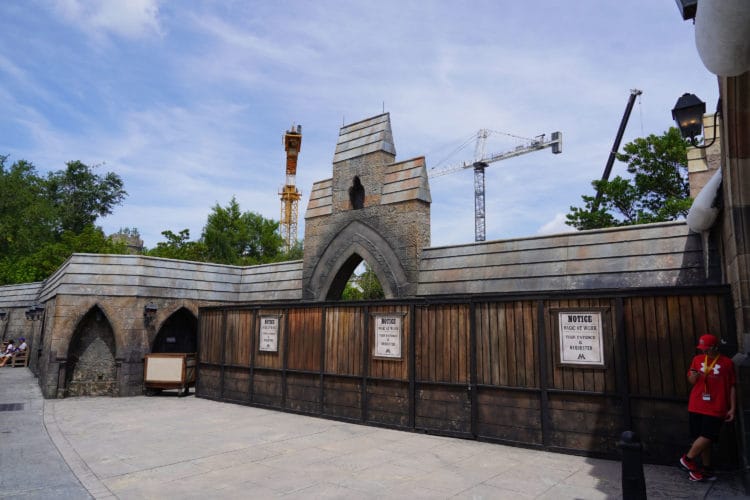 There is currently no opening date announced by Universal Orlando. But, we have heard rumors of a possible opening fall or winter of 2019. This would open around the time of Star Wars: Galaxy’s Edge at Walt Disney World, possibly putting a Star Wars versus Harry Potter fandom clash in Orlando. Please note, everything stated so far is theory and guesses. Until officially announced by the Universal Orlando Resort, nothing is official.

To learn more about this upcoming roller coaster, check out these articles and linked videos.

I can’t velieve you spent that much time on this article. The ride is clearly starting where the track re-entered on the red side of Dragon Challenge. Every single rumor has pointed to that and the layout clearly shows that and has shown that since they started construction on this.

You are literally the only person I’ve ever seen to even suggest that it’s starting out with the long straight away. If you know anything about coasters, that it clearly the brake run of the ride. This was such a frustrating ride and I’m sorry that you spent so much of your time writing this useless article…

It’s fun to speculate. Not a waste. Me thinks the reverse part only works the “original” way though. Drop is funner than lift too. The new wall being built at first straight away could hide Kuka arm mechanisms holding flying car we go under. End staight away seems to go through series of rooms.

Look only at the first element. In your theory the coaster would go up in the lift, not down. How exciting is that? Why spending all that money to horizontally go up?

My head is spinning…Who’s on first??

Theories are theories. It’s fun to speculate right now. It is going to be a phenomenal ride in any direction, although I do worry about the waiting lines to start off with.