Photo/Video Update: Nighttime in The Wizarding World of Harry Potter 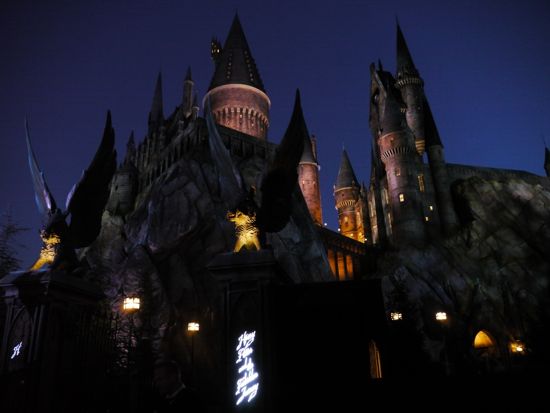 We heard the Wizarding World of Harry Potter in Islands of Adventure would be open all day for the first time, so we headed over around dinner time. This was the first night the new area was open to regular park guests. Before we get to the night shots, let’s look at some of the new and different things we noticed. 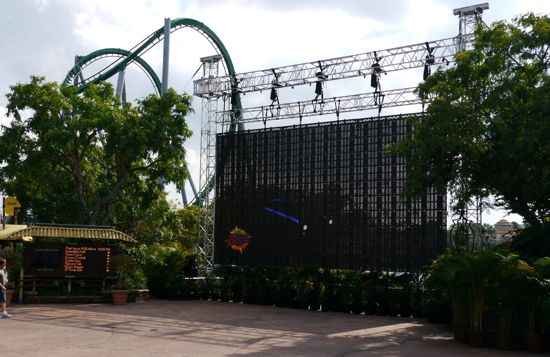 This large video screen has been errected at the front of Islands of Adventure. It was showing clips from various Harry Potter films. I’m guessing this screen will be for guests to watch the grand opening ceremonies on since only so many will fit into the Wizarding World on Friday. 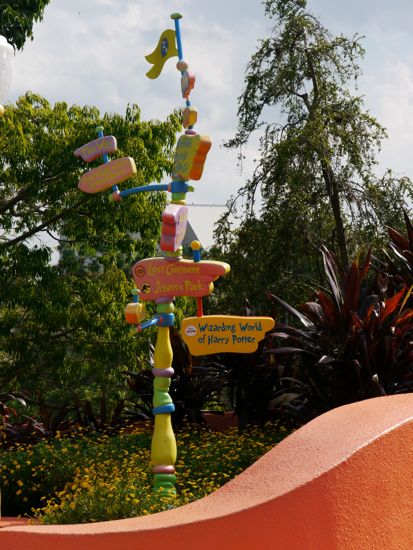 Harry Potter is starting to show up on some directional signs around the park. 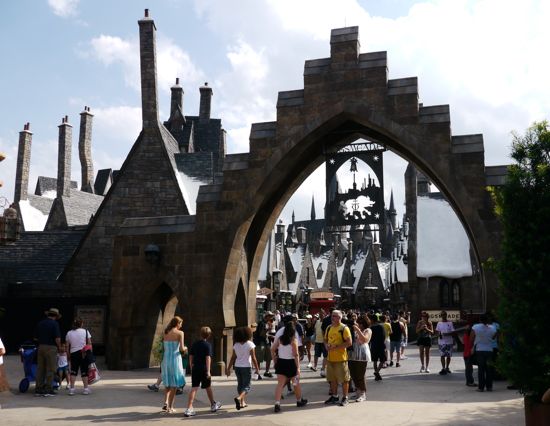 You’ll notice the construction gate has been removed. 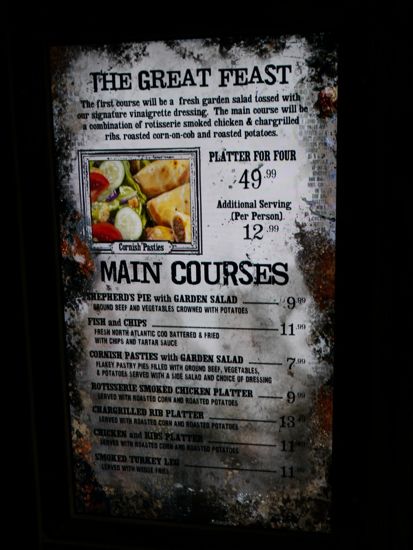 Our first stop was for dinner at the Three Broomsticks. Here’s a look at the lunch/dinner menu. 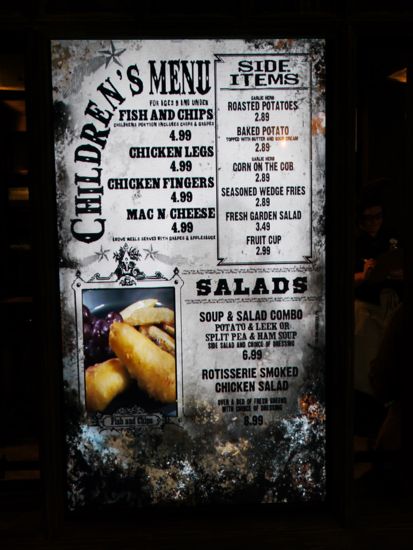 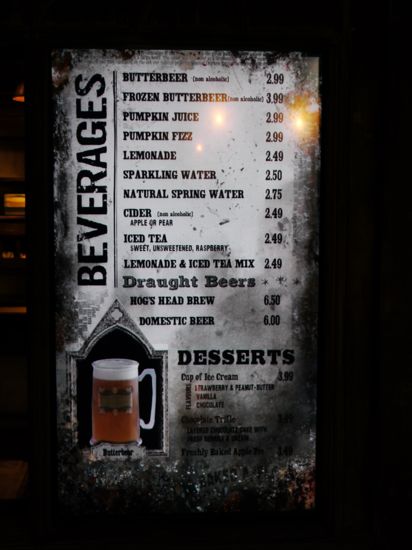 I noticed a drink I hadn’t before, Pumpkin Fizz. We didn’t get to try it but I heard it’s pumpkin juice mixed with soda. 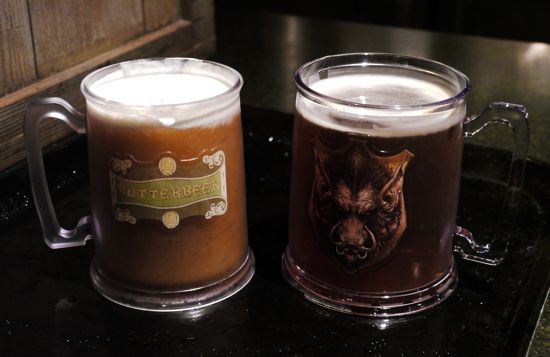 Something else we hadn’t seen was the souvenir mug you can get with the Hog’s Head Brew. (That’s butterbeer on the left.) The exclusive alcoholic beer is $6.50 without the mug and $11.49 with it. The mug also has the words “The Wizarding World of Harry Potter” in clear lettering on the back. Both of the mugs are plastic. 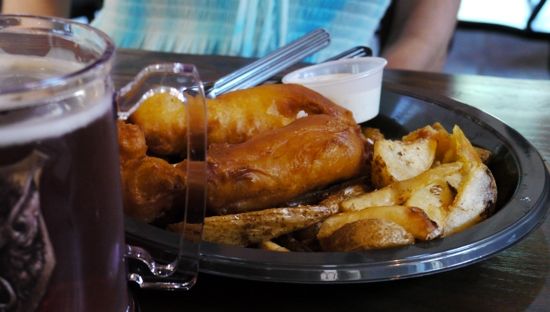 My wife and I ordered the fish and chips. My son also got the kid size fish and chips. We all thought it tasted great. My wife especially liked the tarter sauce. She said the meal tastes better than the fish and chips in the U.K. pavillion at Epcot. I say they’re both equally good. But we both said we would have rather have had the children’s size because it was too much food. 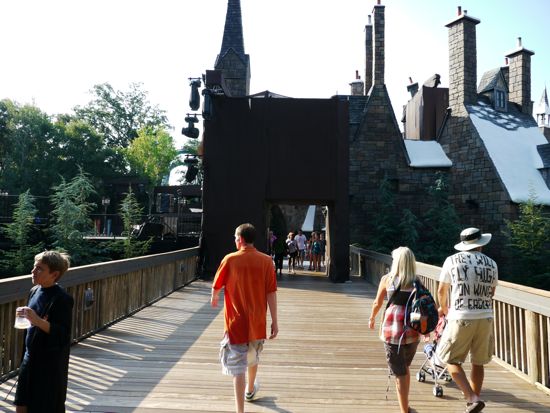 The entrance from Jurassic Park is now open. The black box you see is part of the setup for the grand opening. 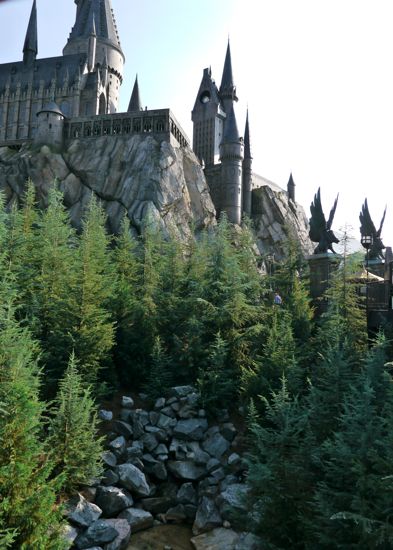 Here’s the view of the castle from that bridge. You’ll also see this view later in our night pictures. 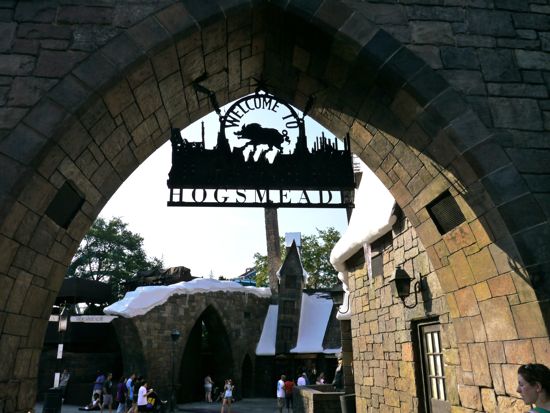 The sign you see when entering from this side. 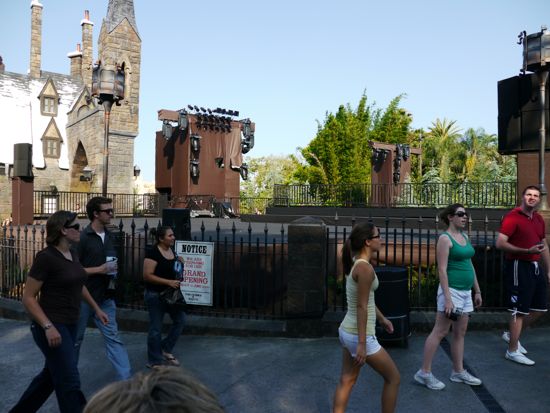 This appears to be the main stage for the grand opening. It’s just outside of the castle entrance. Not many people are going to fit in the area in front of the stage. Click Here to find out about the celebrity guests. Check back later this week for our coverage of all the grand opening activities. 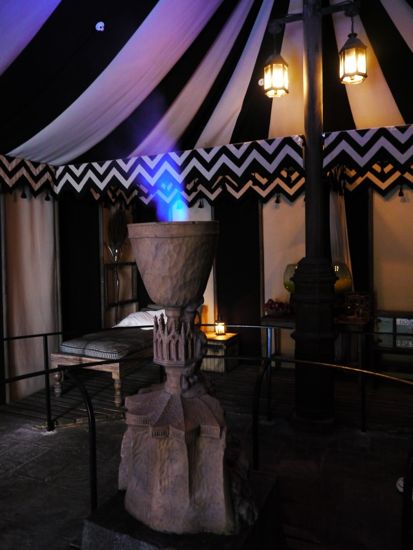 In the Dragon Challenge queue, the Goblet of Fire wasn’t burning the last few times I’d seen it. It seems to be working now and looks great. 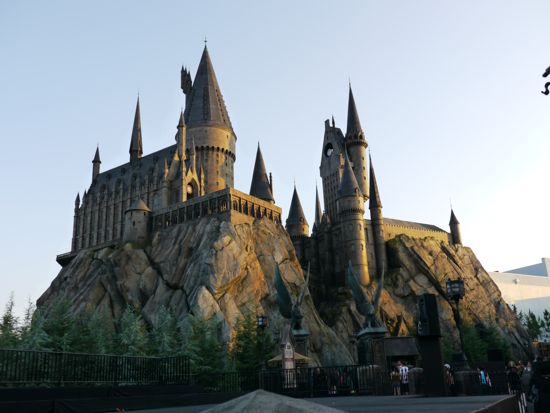 A look at Hogwarts castle lit up by the setting sun. 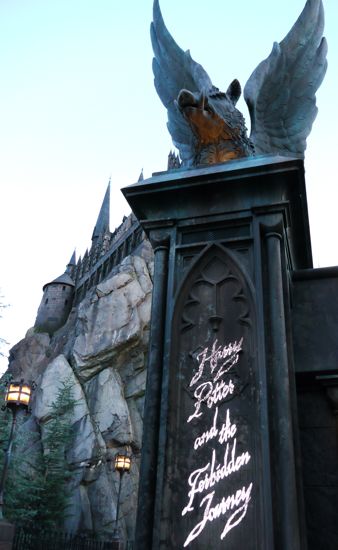 You can’t see this during the day, but as soon as dusk came, the name of the new ride magically wrote itself on each pillar. It erases and rewrites every few minutes. 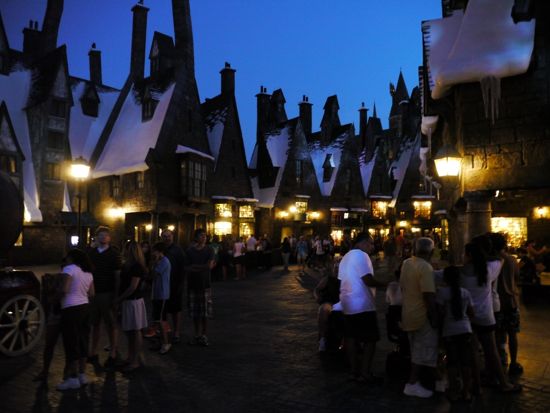 The lights come on as the day fades away. 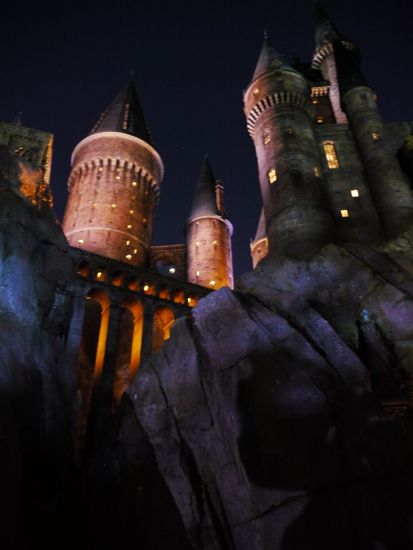 A closer look at the castle lights. 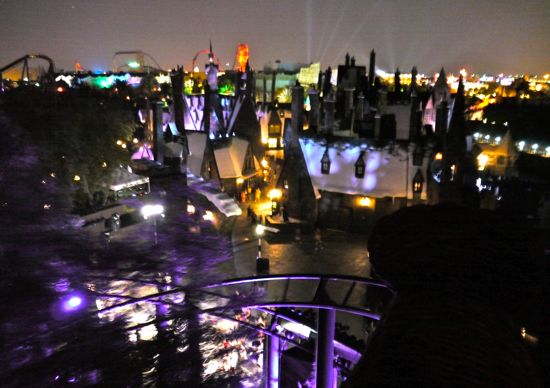 Hogsmeade Village and the more of Universal as seen from the top of the Flight of the Hippogriff ride lift hill. 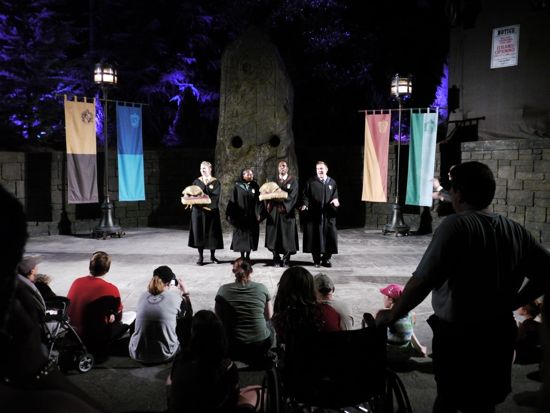 The entertainment was well lit and great as usual. Look for the Frog Choir on the cover of our next issue. 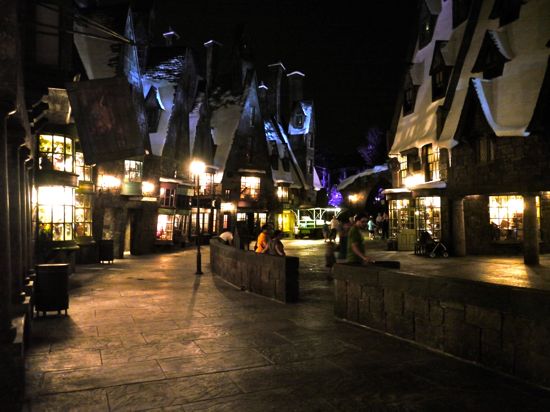 I was surprised how uncrowded the Wizarding World was all day. I guess it’s because most don’t realize it’s open yet. The park closed at 10 p.m. As the closing time came, the streets were pretty empty. I’m sure many were over at Universal Studios for the start of their Summer Concert Series. 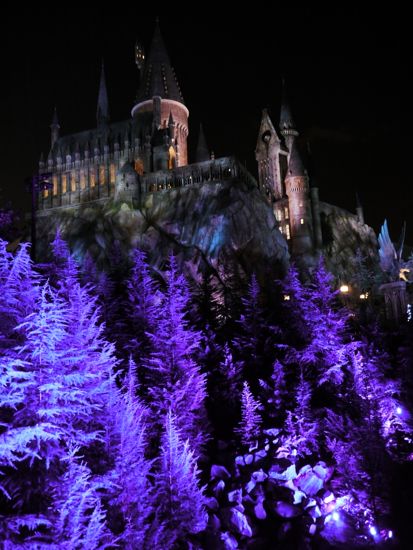 Here’s the same picture as before from the bridge, but a few hours later. I love how they have all the trees lit.

Fianally, here’s a video walkthrough of Hogsmeade Village at night, with stops to look in the storefront windows. You can see in most of the windows better when they’re lit up at night. The whole area is a different experience after dark.

Be sure to visit our YouTube channel for all our videos from The Wizarding World of Harry Potter. Also view our day and nighttime photos in our Photo Gallery.

Fantastic, can’t wait to get there!

Photo Finds: A look around a not...