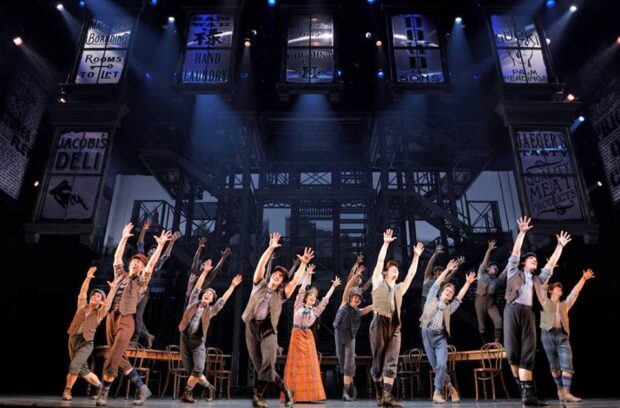 Based off the newsboy strike of 1899 and the 1992 Disney musical movie of the same name, “Newsies” brings together memorable songs, relatable characters and intricate choreography all wrapped up in a heart-warming story.

Like headlines set to music, Newsies tells the story of a group of newsboys making their living pushing the “papes” in the big city lead by veteran Jack Kelly (Corey Cot) and the new comer to the newsboys Davey (Ben Fankhauser), leading a unionization of the business rebelling against a raise in the price of papers. The duo is backed up by the brave little guy, Crutchie (Andy Richardson) and the Les (Zachary Unger at the show we attended).

Added to the mix is the endearing reporter Katherine (Liana Hunt) who encourages the newsboys and helps them along the way as well as playing a love interest for Jack.

While the movie wasn’t a hit, composer Alan Menken, lyricist Jack Feldman, and book writer Harvey Fierstein have revived this story and made it a broadway classic. From “Carrying the Banner,” “The World Will Know,” “Seize the Day,” “Something to Believe In” and “Watch What Happens,” the show is a non-stop adventure through the lives of the newsboys.

To add to the toe-tapping songs, the multitiered sets and picture-perfect outfits add a sense of authenticity and simplicity to the show as well. The most impressive aspect is by far Christopher Gattelli’s Tony Award winning choreography which fuels the show with Broadway dance numbers including backflips, cartwheels, tap and kick lines.

Newsies the Musical runs eight times week at the Nederlander Theater on Broadway and goes on tour this fall with a stop planned in Orlando at the currently under-construction Dr. Phillips Center for the Performing Arts. For more information, call 866-870-2717 or visit newsiesthemusical.com.

MegaCon 2014 coming to the Orange County Convention Center this weekend

Wow, not a word on how this represents one of many black pages from US history book where child labour was normal. This story was based on an actual event when newspaperboys stepped up in 1899. https://en.wikipedia.org/wiki/Newsboys_Strike_of_1899

Space 220 Restaurant at Epcot adds and...