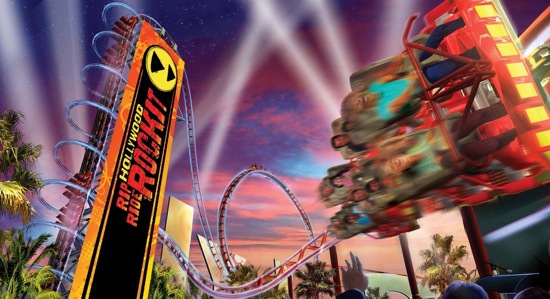 The Coaster Critic has published an interview with  Louis Alfieri, one of the designers of Universal Studios Hollywood Rip Ride Rockit. Here are a few of the most interesting new details to emerge about this unique upcoming roller coaster.

For the first time, riders will be able to create their very own seven minute personal music videos of their rides. Thanks to six on-board cameras, eight high speed special effects (Matrix-style) cameras, and 54 special effects shots you will be able to produce your own unique ride video. The ride itself is enhanced with LED lights on the cars and an illuminated track that will create a different experience for day and night rides.

The large non-inverting loop is the first of its kind in the world while the twisted treble clef maneuver gives a nod to the ride’s music theme. Alfieri had the idea for the treble clef element and sketched it out himself. Finally, the jump cut will put a new spin on the tried and true camelback hill.

Aside from the audio and visual innovations, the station itself will break new ground with a people mover-like loading area. In order to improve loading time, Alfieri stated that the train will never stop in the station. Plans are for the Rockit to dispatch a train about every 23 seconds!

Along with the interview, another video of ride testing was posted:

You can read the complete interview and view a few photos of the Rip Ride Rockit track here.

‘A Christmas Carol’ in the Disney Parks ...