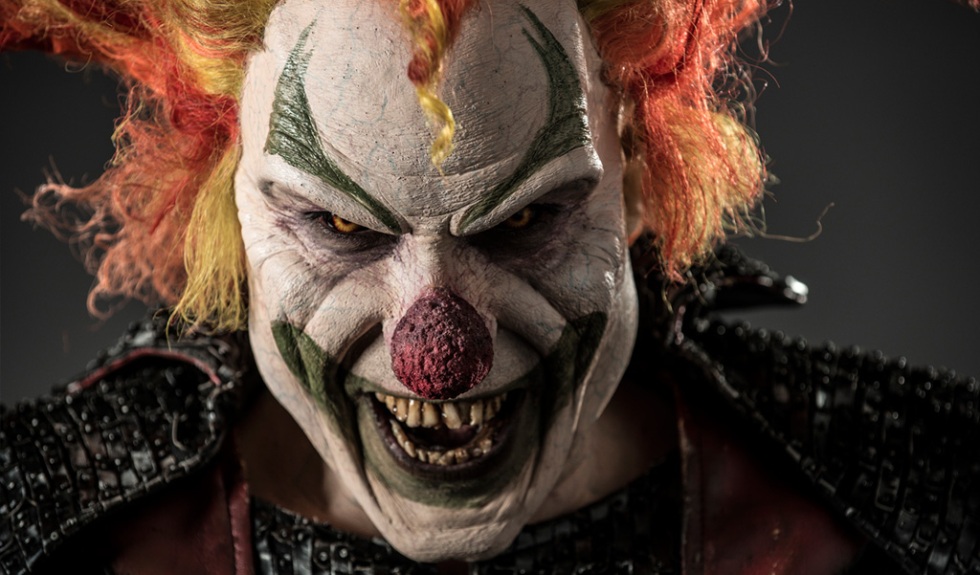 Disclaimer: Unless where otherwise noted, the following is rumor and speculation, and should not be regarded as fact.

It’s that time of the year once again: Haunt Season is upon us. Universal Orlando recently unveiled what we all suspected, <URL=https://attractionsmagazine.com/jack-back-halloween-horror-nights-celebrates-25-years/>Jack the Clown is back for Halloween Horror Nights 25. Cue the maniacal laughter.

Based on Universal’s announcement, this is what we officially know:
• Jack the Clown will be the host of the event.
• There will be nine haunted houses and five scare zones.
• In addition to the five scare zones, there will be roaming hordes filling in the gaps.
• The event will take place over the course of 30 nights.

More announcements are forthcoming, but you don’t need to wait to hear about the rumors that have been making the rounds. Join me as we delve into what Universal Orlando is rumored to have planned for this special 25th anniversary year of Halloween Horror Nights.

Haunted House Speculation and Rumors
Intellectual properties are back. General park guests love them, passionate fans write polemics about them, and I don’t care as long they make for fun mazes. Never fear (or do)! If the rumored list is true, we’ve still a nice blend of original mazes that hearken back to original, classic Halloween Horror Nights mazes.

The Walking Dead is a staple to the event for the time being and should return, much to the chagrin of the diehard fans. Hold on to your rants, ardent Horror Nights fans, because The Walking Dead will most likely return to its 2013 location in the Parade Building, where it was best suited in this owl’s opinion. Like last year, there probably won’t be a scare zone to compliment the maze. As a bonus, I wouldn’t be surprised if Art & Design opted to again place actors outside the house and make the “entrance” of it extend into the queue.

Next up is a property that’s brand new to event. How many of you have wanted to see a house based on Wes Craven’s infamous deconstruction on the slasher genre: “Scream”? Rumors have persisted about this license for a while, and it looks like 2015 will finally deliver, although the caveat being that it’ll be based on the new MTV Television series and feature the new mask for “Ghostface”.

The rumored location for Scream is said be in one of Shrek 4-D’s theaters. This might sound strange upon first glance. Only so many soundstages can be allotted to Art & Design and this year will require one additional location. Rumors originally pointed to there being another Sprung Tent structure built, but it would seem this plan fell through, assuming it was ever in consideration.

An American Werewolf in London received much praise when it debuted in Orlando in 2013 and for good reason. As a wee owlet, I’d watch the indelible transformation sequence, rewind the VHS, and watch it again. I’d do this over and over, trying to grasp how they were able to capture that phenomenal effect on film. The Orlando maze encapsulated the film, which will always hold a special place in my little owl heart.

The Hollywood version of the maze in 2014 was also adulated, and it looks like An American Werewolf in London is returning for another go at Orlando. No word if it’ll be a scene-by-scene remake of the 2013 or an entirely new take, but I suspect some of Hollywood’s scenes in 2014, such as the fantastic subway train scare will make the cut in Orlando’s 2015 maze.

Freddy vs. Jason is something I’ve heard rumors of before and with the previous rapport established with New Line Cinema in 2007, and the success of Alien vs. Predator in 2014, this acquisition just makes sense. We’ll visit the dream world and Camp Crystal Lake, and end up caught between the two horror icons.

“Blizzard” is rumored to be one of Art & Design’s original mazes this year. Rumors describe it as a mental asylum like Shady Brook caught in a harsh snowstorm. The inmates will end up the prey of The Collectors from the Body Collectors mazes in 2005 and 2008. I’ve a suspicion that the asylum hallway glimpsed in the debut video of Jack is going to be the aesthetic of this maze: frigid, bleak, and of course, haunted.

Over in one of the sprung tents, Insidious is rumored to have finally found its way over on the East Coast. Given the timing of Insidious: Chapter 3’s June 5 release, the consensus seems to be that it’ll be the one of the first mazes announced for Halloween Horror Nights.

Rumored in the other sprung tent is a 3D maze based on the original Alice in Wonderland novel. This would be a psychedelic romp with a mixture of recognizable characters and scenes reimagined by Art & Design. Given that this is a special anniversary year, it seems many suspect the house will be titled “Asylum in Wonderland 3D” and take cues from the 2008 scarezone of the same name.

Many clamored for Art & Design to do a sequel to 2001’s RUN, and they got it for better or worse in 2006 with RUN: Hostile Territory. A proper successor is rumored in the Disaster extended queue. I heard it’s been labeled “RUN 3” and it’s rumored that it’ll be modeled as a carnival attraction that will force guests to maneuver through barbed wire fences, dodge chainsaws and hope they pick the “right” path to survive.

The final rumored maze is the special 25th anniversary haunted house that’ll essentially be a sequel to The Hallow’d Past in 2010. This is rumored be the “mega” maze this year, much like The Walking Dead was in 2014. The theory making the rounds is this will be a new House of Horrors for Jack’s carnival constructed out of the remnants of the Halloween Horror Nights warehouse previously seen in 2010.

Scare Zone Speculation and Rumors
In the Plaza of the Stars (the alley between Shrek 4-D and Despicable Me) Art & Design is rumored to be reimagining their Scary Tales characters in the popular-according-to-the-Internet-sub-genre-of-science-fiction STEAMPUNK. This would be the ideal place for stilt-walkers. Hurray for stilts!

Over in San Francisco, it’s a battle between black-and-white and color horror monsters with a zone called All Nite Drive-In. Think of it as an amalgamation of 2009’s Horrorwood Die-In, 2003 and 2006’s All Nite Drive-In, and 2012’s Universal’s House of Horrors.

Hollywood Boulevard will incorporate all the icons of Halloween Horror Nights past. My theory? It’ll tie into the special anniversary mega haunted maze. Perhaps we’ll revisit the warehouse scare zone in the same location in 2010 albeit with a big change? Rumors describe it as a mixture of the scare zones 7 (2011) and Face Off: In the Flesh (2014).

Central Park will boast the now indelible Jack-O-Lanterns used in previous years with scare actors of a slight stature dressed as trick-or-treaters. Think of it as a traditional take on contemporary Halloween imagery complemented with fog and hauntingly melodic music.

New York, conversely, will boast a fall holiday festival invaded by psychotic inmates from Shady Brook. If you had the privilege of walking through the wonderful Psychoscareapy: Home for the Holidays (2007), you can imagine how this scarezone will probably turn out for the unfortunate carnies.

Finally, there will be roaming hordes filling in the gaps wherever they might be. From what I’ve heard, they’ll be carnies under Jack’s thumb. Expect the Rat Lady, Chainsaw Drill Team and a few surprises.

Further Rumor and Speculation for HHN 25

The aesthetic of the theming shown on the Halloween Horror Nights official website coupled with Jack’s new attire suggests this will be a more refined version of The Carnival of Carnage theme employed in 2007. Hopefully, they’ll be more than just a handful of carnies roaming the streets.

Jack appears weathered and older in the official press pictures unveiled. Originally, I interpreted these photos as him decomposing despite his “immortal” state, but the supposed lore of Halloween Horror Nights states that Jack was “revived” as a mortal again in 2006 thanks to The Arrival show. In 2007, he located Doctor Oddfellow, the man who killed him and concealed his corpse inside a giant jack-in-the-box, and finally enacted his revenge. He pilfered Oddfellow’s jacket and took his traveling carnival on the road to recruit more attractions. We can assume that he’s continued running this carnival and it’s since grown.

I’m a nerd about the mythos and lore of things, but it’s important not to take this stuff too seriously, as Art & Design has been known to bend their rules for the sake of creative liberties that ultimately better serve the event. It’s nevertheless a curious take on the character.

Jack appearing older, far more menacing and fully decked out in ringmaster garbs is a decidedly different design compared to his past incarnations. The dark red leather connotes a more matured wardrobe, which given my older age, and many years following Halloween Horror Nights, appeals to me. How old am I? Owl lifespans are different. Also, it’s none of your business!

So Jack’s older now and may still run the Carnival of Carnage. Astute readers might have noticed that the official Halloween Horror Nights page boasts a brand new logo made just for this year’s event. While it may sound pointless to draw attention to this detail, I can assure you it’s noteworthy. Universal’s marketing package for Halloween Horror Nights 22, 23 and 24 was, frankly, lackluster and bereft of creativity. This is a positive change and indicative of Jack being the first proper icon in since 2011’s Lady Luck. It’s evident that Universal is trying once again to implement a cohesive theme into the event.

All in all, the return of The Carnival of Carnage excites me. The more time that’s passed, the more I’ve come to appreciate 2007’s event despite its faults. Further reflection revealed that 2014 was one of the most lackluster years in Orlando’s history. This isn’t to say I didn’t derive any enjoyment from it, but I’m strapped to recall more than a handful of noteworthy things from the 2012–2014 era of Orlando’s Halloween Horror Nights. The rumors I’ve heard thus far indicate that the event is morphing once again. We can only hope it’s for the better.

Here’s a look at the opening ceremony for the 2007 Carnival of Carnage Halloween Horror Nights:

• Fowl Owlerson, or “Fowly” as he’s affectionately known, has been attending theme parks since he was a little owlet. When he’s not filtering through the latest murmurings around the industry, he can be found writing, reading and snacking on the occasional rodent. Follow him on Twitter @fowlowlerson for the latest rumors and drop an anonymous letter to him at [email protected] or via Direct Message on Twitter.