The Rumor Queue: Is a Jurassic Park roller coaster coming to Universal Orlando? 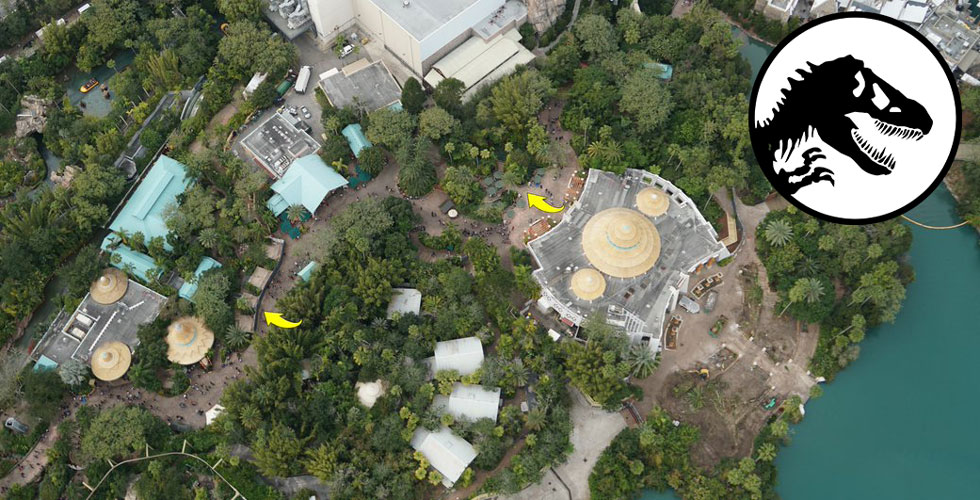 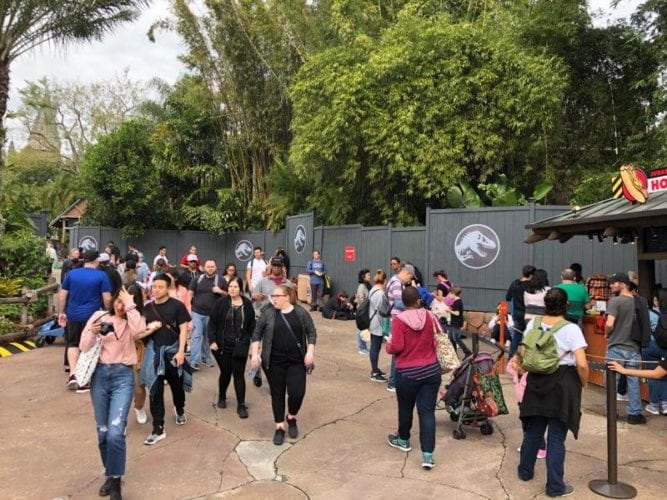 Over the past few months, we’ve noticed markers all over the Jurassic Park section of Universal’s Islands of Adventure. That, combined with permits, led us to believe that something big is coming in the near future. Now, construction walls line most of the pathways inside of Jurassic Park. 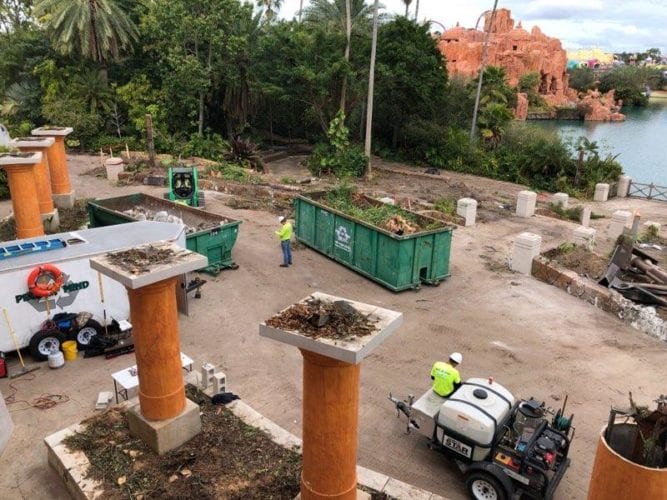 If you look out of the second floor back viewing area of the Discovery Center, it is easy to see a large amount of demolition work going on. 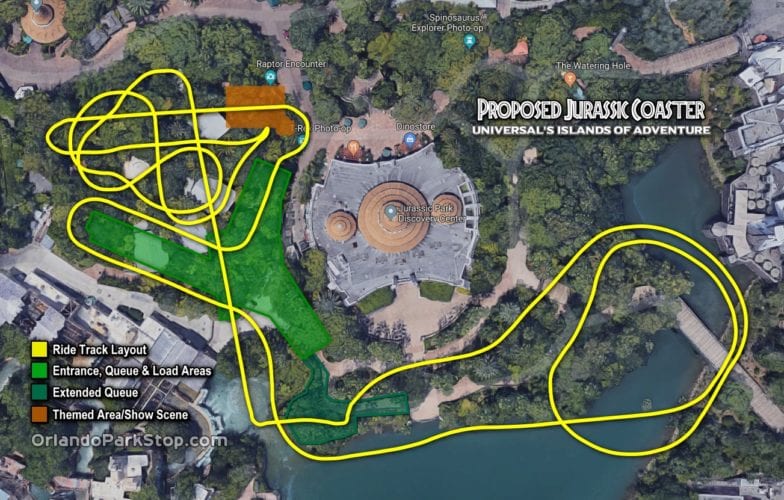 This is all in preparation for a major new coaster, according to Alicia Stella of Orlando ParkStop.

The rumor is that guests will be taken on a multi-launch coaster in, up and around the wooded area next to the Jurassic Park Discovery Center. It is suggested guests will first go through a minor show scene, possibly about raptors, before being launched in a wide assortment of twists and turns. This will lead guests to the second launch, which would include a top hat element. 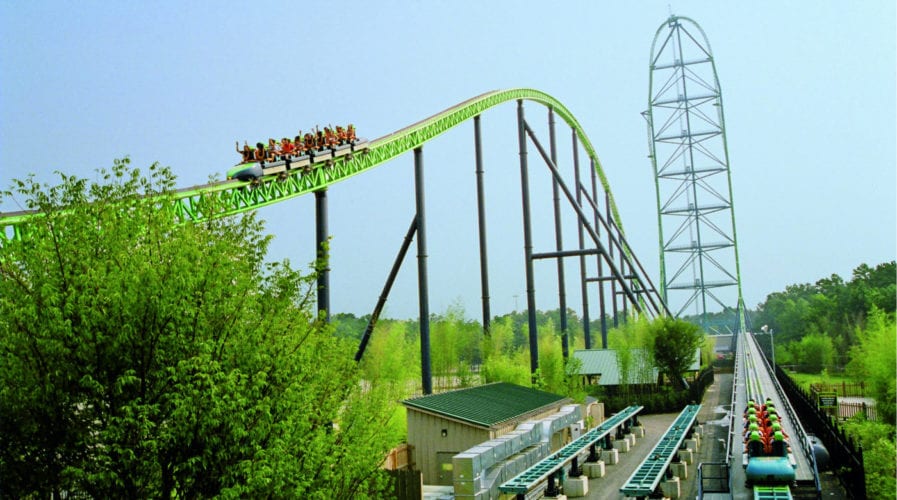 A top hat element of a track takes coasters into a sharp upward movement, then continuing forwards into a downwards dive back towards the ground. 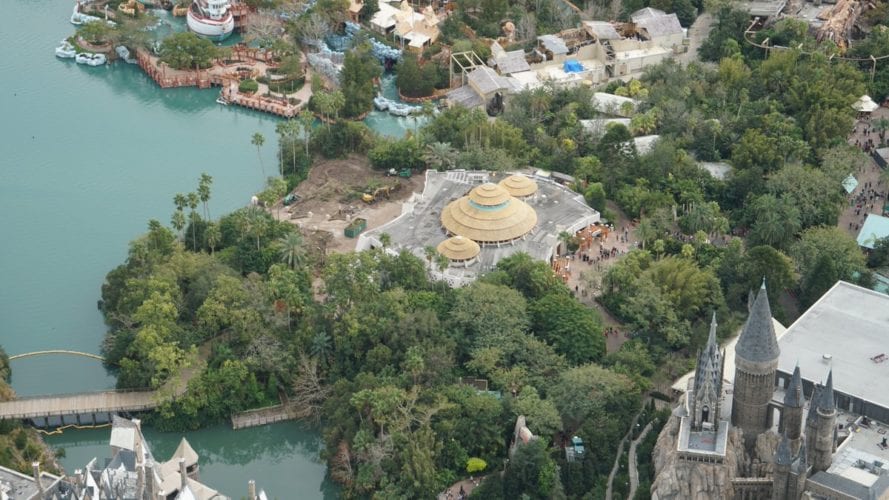 As you can see here, the Jurassic Park Discovery Center is quite close to the Hogwarts and Hogsmeade areas. In an effort to stick to the theme and story of the Wizarding World, will the Jurassic Park coaster be very tall?

We don’t know yet, but the coaster is expected to take a 540-degree turn close to the water, near the bridge on the bottom left of the photo above. This would mean guests eating at the outdoor area of Hog’s Head in Hogsmeade would be able to see guests flying by. 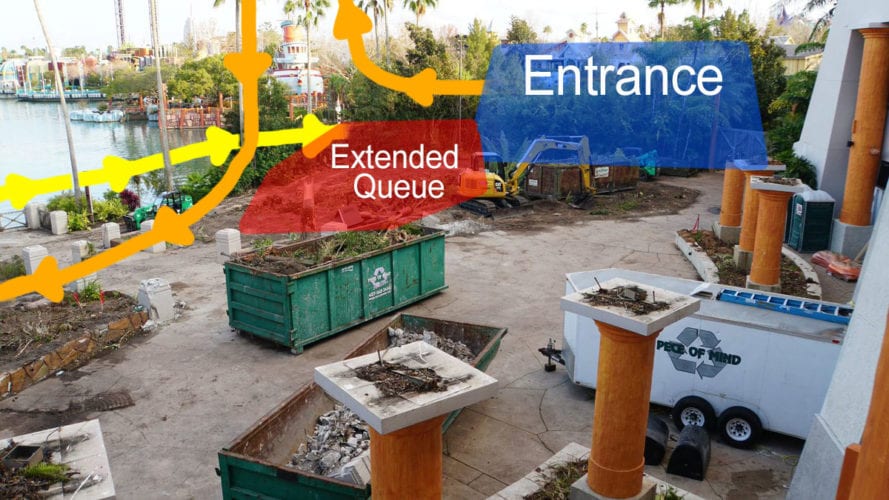 This would be the general layout of the new entrance, with the orange track going into the top hat element after the second launch. It would then come down at a very high speed, generally close to the ground, where it would enter the 540-degree turn near Hog’s Head. Then the coaster would come back, showcased by the yellow line, gliding above the water before taking a final turn near the woods into the station. 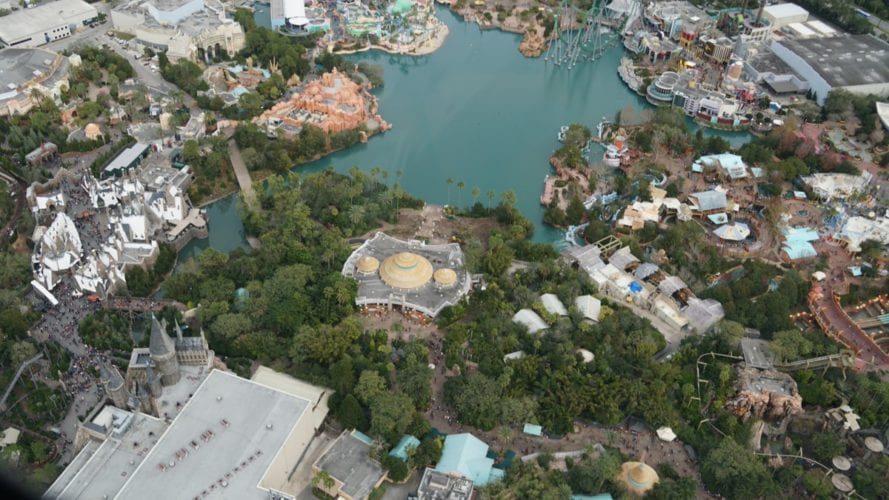 It is also rumored that the Raptor Encounter will be moved during this construction. The carnival games have already been removed.

The coaster itself may have a raptor theme, but unlike the extensive theming the Harry Potter roller coaster is receiving, this theming for this new attraction would likely not be as intense. This coaster’s theming would be similar to that of the Incredible Hulk roller coaster.

A color scheme and themed queue are possible, but its purpose won’t be to take guests on a storytelling experience. There is, however, the thought that a short raptor show scene could start the attraction and be the reason for the ride’s sudden launch.

The Jurassic Park area at Universal Studios Japan already has a high-speed roller coaster called “Flying Dinosaur,” and as you can see in the video below, the theming is very light:

This new coaster would certainly change the tree-filled back section of the park. Instead, the landscape would be filled with large steel supports, fast coasters, and screaming guests.

Even with all this information, there is still so much to learn about this upcoming attraction. We will have to wait for more construction elements and ride leaks, or for Universal Orlando themselves to speak up about this major upcoming project.

Do you have any more insight into the Jurassic Park roller coaster or corrections to our information above? Leave a comment below, email [email protected] or send a direct message on Twitter.

Paw Patrol Live! ‘Race to the Rescue’ coming to CFE Arena in Orlando