SeaWorld Orlando will be rockin’ the night away from May 24 to Sept. 1, as Shamu Rocks, Mystify and Sea Lions Tonight return and a new lakeside ski show is added. And to add to the rock ‘n’ roll theme, DJs will be spinning the tunes at different areas around the park.

• Shamu Rocks – A rock n roll concert combining improvisational movements of killer whales with music remixed with some of the hottest rock stars in the industry.

• – An all-new nighttime, lakeside show where skiing meets soaring. From Bayside Stadium guests will see a concert where the performers are skiers and the water’s the stage. Stunt kites towed by Wave Runners will perform maneuvers while trailing fireworks in the sky.
(EDIT: I’ve just been informed the name of the ski show will not by Hydro. The name will be Bayside Ski Jam.)

• Mistify – Fireworks, flames and fountains fill the night during the ending nighttime spectacular that is best seen along The Waterfront. 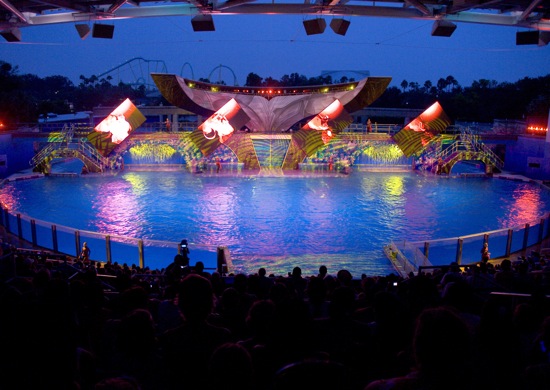 Photos from The Simpsons Ride

Sea Lions Tonight, not to be missed…

Hydro, sounds interesting… its good to see new shows there than just a stage for various musical acts.

I’ve just been informed the name of the ski show will not by Hydro. They haven’t yet come up with a different name.

The new name of the ski show is Bayside Ski Jam.

Photo Finds – ‘Walls Down at Jimmy...

As Dreamers Do – EPCOT 35 Celebration