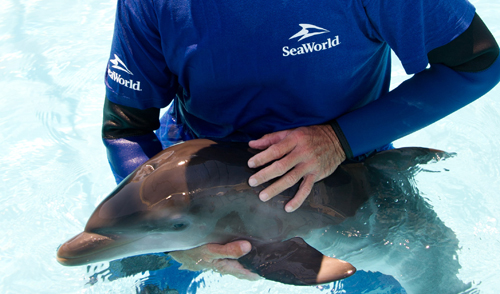 Weighing slightly less than 35 pounds, SeaWorld’s animal care experts believe the dolphin is no more than five days old. It’s size, the upright stature of its dorsal fin and the attached umbilical cord at the time of rescue also are signs of being under a week old.

Preliminary tests have showed no major health issues but they are making sure the young animal gets the essential nutrients he needs.SeaWorld’s animal team has been manually tube-feeding the dolphin every two hours since dolphin calves typically nurse from their mother until they are 12 to 18 months old. The youngster was probably separated from his mother before becoming stranded. This is the first bottlenose dolphin to be rescued this year.

Check out this quick video featuring an interview with Pedro Ramos-Navarrate Supervisor of Animal Care at SeaWorld Orlando:

Movie Review: The men in black are back and better than ever in MIB3

These are the most precious creatures on the planet. I’m so glad that you all take the time to help them. I only wish I could be so fortunate. God bless you all for the work that you do!