SeaWorld’s most famous killer whale, Tilikum, has passed away 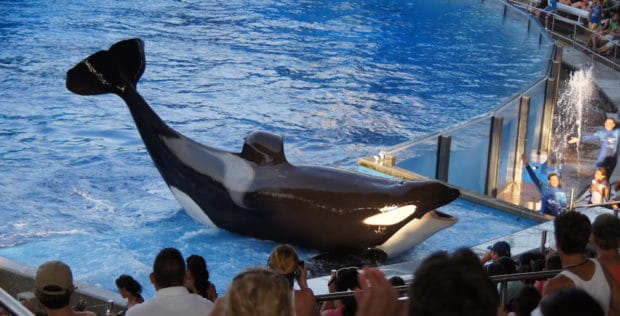 Tilikum, SeaWorld Orlando’s largest and most famous orca, and the one involved in the death of SeaWorld trainer Dawn Brancheau, has died after an extended illness.

In early 2016, SeaWorld reported that Tilikum’s health was beginning to deteriorate. Around that same time, they also announced they are planning to end the killer whale shows and breeding at their parks. They have been providing updates on Tilikum’s health through their SeaWorldCares website and released this statement today:

The SeaWorld family is deeply saddened to announce that one of its most well-known orcas, Tilikum, has passed away. Tilikum passed away early this morning, Jan. 6, surrounded by the trainers, care staff and veterinarians that provided him around-the-clock world-class care.

Like all older animals, Tilikum had faced some very serious health issues. While the official cause of death will not be determined until the necropsy is completed, the SeaWorld veterinarians were treating a persistent and complicated bacterial lung infection. The suspected bacteria is part of a group of bacteria that is found in water and soil both in wild habitats and zoological settings.

Tilikum’s veterinarians and caretakers delivered various treatment regimens over the course of this illness, which consisted of, among other things, combinations of anti-inflammatories, anti-bacterials, anti-nausea medications, hydration therapy and aerosolized antimicrobial therapy.

While today is a difficult day for the SeaWorld family, it’s important to remember that Tilikum lived a long and enriching life while at SeaWorld and inspired millions of people to care about this amazing species.

Tilikum’s life will always be inextricably connected with the loss of our dear friend and colleague, Dawn Brancheau. While we all experienced profound sadness about that loss, we continued to offer Tilikum the best care possible, each and every day, from the country’s leading experts in marine mammals.

“Tilikum had, and will continue to have, a special place in the hearts of the SeaWorld family, as well as the millions of people all over the world that he inspired,” said President & CEO of SeaWorld Joel Manby. “My heart goes out to our team who cared for him like family.”

Tilikum became a part of SeaWorld’s family 25 years ago. Estimated to be about 36 years old, Tilikum was near the high end of the average life expectancy for male killer whales according to an independent scientific review.

Tilikum was not born at or collected by SeaWorld. He came to us from Sealand of the Pacific in Canada. SeaWorld has not collected a whale from the wild in nearly 40 years, and this past March we announced the end of the orca breeding program effectively making the whales currently at SeaWorld the last generation of orcas under human care.

What happened to Tilikum?
We’re saddened to say that Tilikum faced some very serious and chronic health issues that he was not able to recover from.

How old was Tilikum?
Tilikum was estimated to be about 36 years old, which, according to independent studies, is slightly older than wild male killer whales live in the region where he originated and similar to males from other locations.

How many killer whales does SeaWorld care for now?
With the loss of Tilikum, SeaWorld now cares for 22 orcas at its three facilities in Orlando, San Antonio and San Diego.

Was Tilikum born at SeaWorld?
Tilikum was not born at or collected by SeaWorld. He came to SeaWorld in 1991 from Sealand of the Pacific in Canada. SeaWorld has not collected a whale from the wild in nearly 40 years.

Will the killer whale shows stop?
The One Ocean show at SeaWorld Orlando will continue as scheduled. SeaWorld announced in March 2016 that it was introducing new and inspiring orca encounters.

How are the other whales responding?
The rest of the whale group is doing well and are behaving normally. It is not uncommon for the animals to continue to behave normally after a group member leaves the pod.