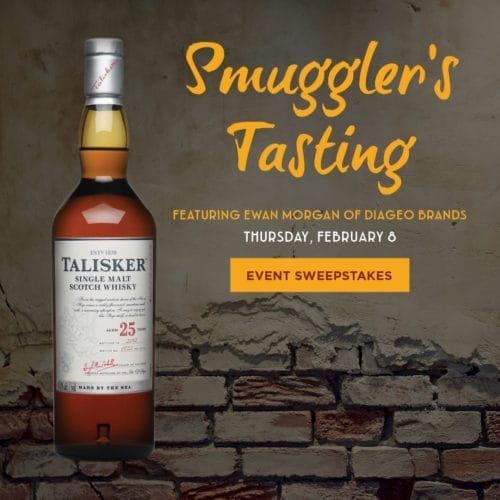 Enzo’s Hideaway kicks off its Smuggler’s Series on Feb. 8 with a whisky tasting, and you can win tickets to attend.

You can relive the “old fashioned” Prohibition Era in an underground speakeasy when Enzo’s Hideaway at Disney Springs starts its Smuggler’s Series with an exclusive whisky tasting on Feb 8.

Enzo’s Hideaway, the new bar and eatery recently opened by the Patina Group on the grounds of Walt Disney World’s former Pleasure Island, will begin hosting Smuggler’s Series special events starting this month. The first event will be a Classic Malt Whisky Tasting on Feb. 8 from 5 p.m. to 7 p.m. Guests will enjoy a tasting of six prestigious Diageo Classic Malts Whiskies, paired with a meat and cheese plate to stimulate the palate.

The event will be hosted by Ewan Morgan, the National Director of Diageo’s Reserve Program, a third generation ‘whisky man’ and one of the most knowledgeable whisky resources in the industry. He will use Classic Malts Tasting Mats to give a tour of six famous Scottish distilleries. As an added bonus, a very rare and unique whisky from Enzo’s reserves that few people have ever seen has been added as a seventh tasting.

This first Smuggler’s Series event can only be attended by winning a ticket via an online contest. To enter, visit patina.social/enzos-hideaway-classic-malt-whisky-tasting. You must be 21 years or older to enter. Contest winners will be announced and contacted via email on Feb. 5. Travel expenses to and from Enzo’s Hideaway for this tasting are not included.

For more about Enzo’s Hideaway visit patinagroup.com/enzos-hideaway, and watch these videos to explore Enzo’s and its sister restaurants:

WonderFall Flavors bring a taste of autumn to...

Brush up on the unusual and best beers...

‘Stranger Things’ will come to life at...