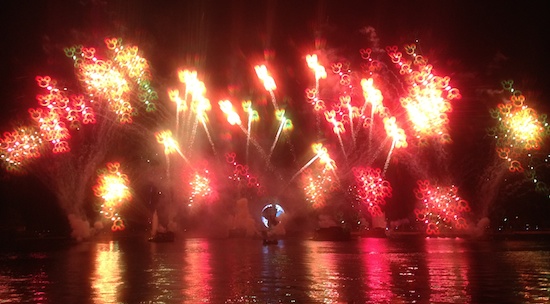 If you’re attending a wedding reception at Epcot, or receive a special Disney gift basket, you may be able to get your hands on some special glasses. These paper glasses don’t look like much, but if you put them on at night and look at the lights, or a fireworks show, you’ll have Mickey-vision.

You may have seen similar glasses that let you see shapes in the lights – maybe it was snowflakes or a rainbow 3D effect. Similar glasses have been sold during the Osborne Christmas lights at Hollywood Studios. But these glasses would make Hidden Mickeys author Steven Barrett go crazy. They make the three circle Mickey Mouse shape appear around almost every light source.

Here’s a look at how three of Disney’s most popular nighttime shows look through the glasses. Check out these Mickey-vision clips from Illuminations at Epcot and the Main Street Electrical Parade and Wishes at the Magic Kingdom:

Unfortunately these glasses aren’t readily available and don’t come cheap. From what we’ve been able to gather, you can only get them as part of a private event at Epcot such as Disney Weddings or through a gift basket package from Disney Florist.

Space Shuttle Orbiter Discovery now on display at the Smithsonian

Fun Spot America is having a birthday sale...

WOW, that is pretty cool i must say

You can actuLly ask to be added in any florist basket. That’s what I did last time for the trip with my cousin and gis family. The kids loved it (and so did I).

Good to know. Thanks.

Do you know if the glasses have a specific cost when you add them?

When I went to the 3d Disney Dessert Discoveries during Food and Wine in 2010, they gave these to everyone when they brought us all to our special viewing spot for Illuminations.

Legoland gave away those type glasses, though they were lego bricks not mickey heads, on new years eve and fourth of july. They look like old school paper 3-D glasses.