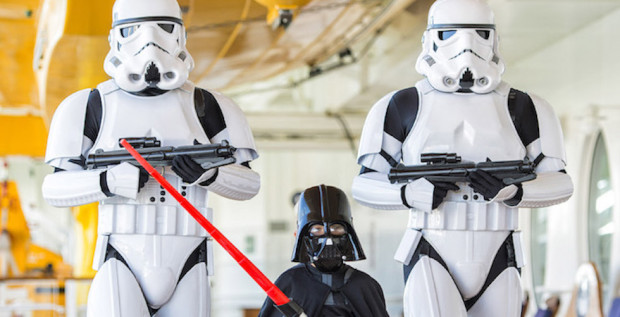 The Force is strong with Disney Cruise Line, which just announced the return of Star Wars Day at Sea to the Disney Fantasy for select sailings in 2017. This galactic addition to the Fantasy’s Caribbean itineraries was introduced in 2016 to celebrate the release of Star Wars Episode VII: The Force Awakens. Apparently, Star Wars Day at Sea proved popular enough that it’s striking back starting in early 2017, appearing on 15 sailings between Jan. 7 and April 15, 2017.

“Our guests keep telling us that Star Wars Day at Sea is an experience they’ll never forget, that it’s a thrill of intergalactic proportions,” said Karl L. Holz, president of Disney Cruise Line. “In response to guest demand, we’re pleased to create even more Star Wars memories aboard the Disney Fantasy in 2017 with an expanded schedule of these special sailings. Clearly, the Force is alive and well on the high seas!”

Featured activities during the Star Wars Day at Sea include:
• Characters from across the Star Wars galaxy are onboard for interactions, photos and also may be seen patrolling the decks.
• Kids and families enjoy friendly competition during Star Wars trivia games, putting their knowledge of the film and television sagas to the test.
• Guests are encouraged to bring their costumes and participate in the costume celebration held in the ship’s atriuIn “Jedi Training: Trials of the Temple,” Force-sensitive children learn the ways of the Jedi and use their new-found skills in a final face off with Darth Vader.
• Star Wars-themed arts and crafts, games and activities are offered throughout the day in Oceaneer Club and Oceaneer Lab youth clubs.
• Star Wars Deck Party and Fireworks: The evening blasts off with a deck party filled with music, a galactic dance party and the arrival of Star Wars characters on the deck stage. The grand finale is a display of pyrotechnics, lighting and sound effects set to a medley of Star Wars music.
• Event merchandise exclusive to Star Wars Day at Sea is available on each sailing, including a range of collectible items, apparel and trading pins.
• Specialty Star Wars-themed beverages, including non-alcoholic offerings, as well as snacks, dinner menu items and desserts.
• Guests can watch “Rogue One: A Star Wars Story,” the first in a new series of standalone Star Wars films, to be released on Dec. 16, 2016, as well as all seven films in the Star Wars saga.

Star Wars Day at Sea activities (excluding special edibles and merchandise) are included in the cost of your cruise, but you’ll want to request meet & greet times with the characters as soon as possible.

For more about Star Wars Day at Sea, here’s a video Disney Cruise Line released about the event:

Here’s a photo gallery from a previous cruise: