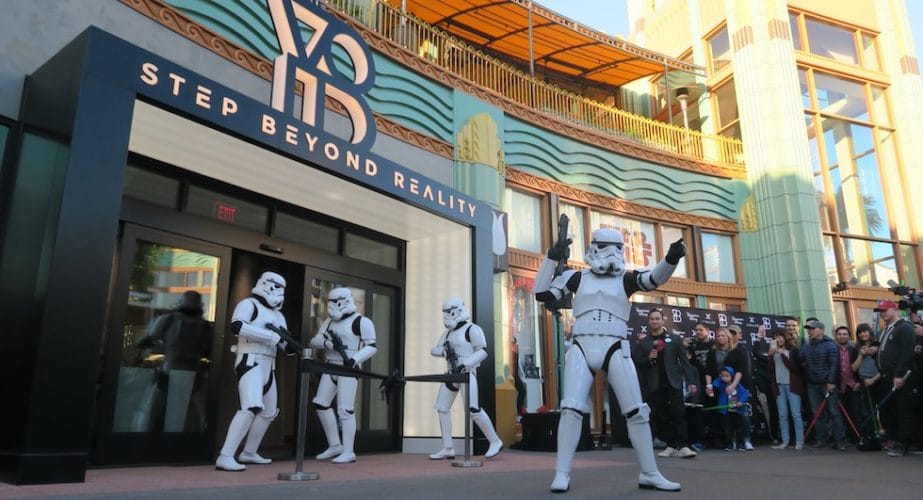 Star Wars: Secrets of the Empire VR experience is now open at Downtown Disney at Disneyland. Photo by Tiffany Mink.

Yesterday morning marked the grand opening of a brand new Star Wars virtual reality experience in Downtown Disney Anaheim. Star Wars: Secrets of the Empire offers fans a truly immersive opportunity to step into the famed galactic franchise. This marks the third installation of this experience after locations in Disney Springs and London debuted in December.

In what used to house retail locations Disney Vault 28, D-Street, Fossil and Something Silver, this attraction goes beyond anything Star Wars fans have yet to experience. The Void Chief Creative Officer and Co-founder Curtis Hickman said “The culmination of the magic of Disney and the magic of Star Wars and the Void all coming together, I finally feel like I’ve found that magic I’ve been looking for.” Todd Bennett, general manager of Downtown Disney District, even refers to the project as “legacy work,” cementing the addition as part of the world-class entertainment guests can enjoy at the Disneyland Resort.

The story of the attraction itself takes place between Star Wars Episode III and IV. Teams up to four check-in and are greeted with a video message directly from Cassian Andor to complete an undercover mission for the Resistance. Everyone gears up in tactical-like equipment before jumping into an ship to meet K-2SO and the real adventure begins.

Participants arrive at Darth Vader’s home of Mustafar where the heat and smell of lava take the experience to a whole new level of realism. The perceived elevation throughout moments of the mission can even turn the stomach a rebel who’s uncomfortable with heights. And it’s not just what you can see in your 360 degrees of visibility, but also what you can touch. When you reach out to grab a blaster, it’s actually there.

Unlike a traditional video game, you don’t have any “lives” to lose. However, you do feel it whenever (and wherever) a Stormtrooper gets a lucky shot. The responsiveness and accuracy of the vest alerts guests to the location of troopers to take out even if they aren’t in your direct line of sight. It’s a unforgettable experience that should quickly jump to the top of the “must-do” list for any Star Wars fan.

Tickets for The Void at Downtown Disney are on sale now for $29.95 per person. Participants must be at least 10 years of age and anyone under 48” is actually too short to be a Stormtrooper. Annual Passholder discounts are not currently offered.

Here’s a look at the opening:

The Void Star Wars: Secrets of the Empire Grand Opening at Disneyland California

Here’s the opening of the attraction at Disney Springs and a preview of what you’ll encounter:

Star Wars: Secrets of the Empire now open inside The VOID at Disney Springs

Here’s our coverage of the attraction at Disney Springs:

The new Radisson Blu Anaheim is only...