It’s always fun to tour the actual sets where your favorite movies and television shows were filmed, and we were able to do just that this summer as we took the Warner Bros. Studio Tour Hollywood. Here are some of the highlights from our tour. 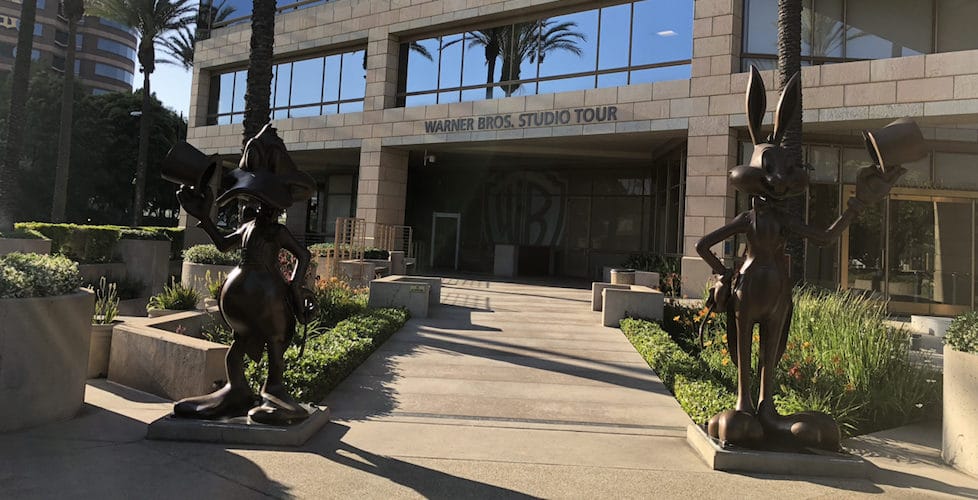 The entrance to the Warner Bros. Studio Tour attraction in Hollywood. 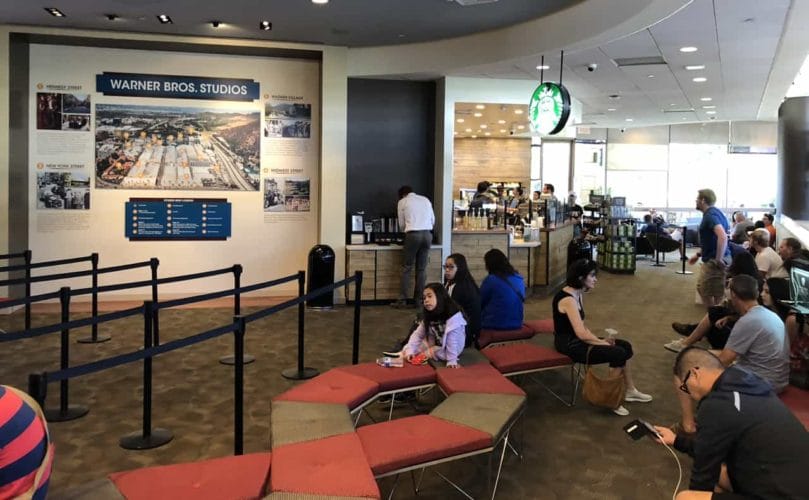 Once you sign in, you’re asked to wait here to be called. It’s a nice waiting area with some history and information on the walls, and a Starbucks right inside.

First up you’re taken into a screening room to watch a video about the history of Warner Bros., then your tour guide takes you to one of these carts, which will be used to drive you around the lot. As you can see, you’re grouped with around 16-20 people. 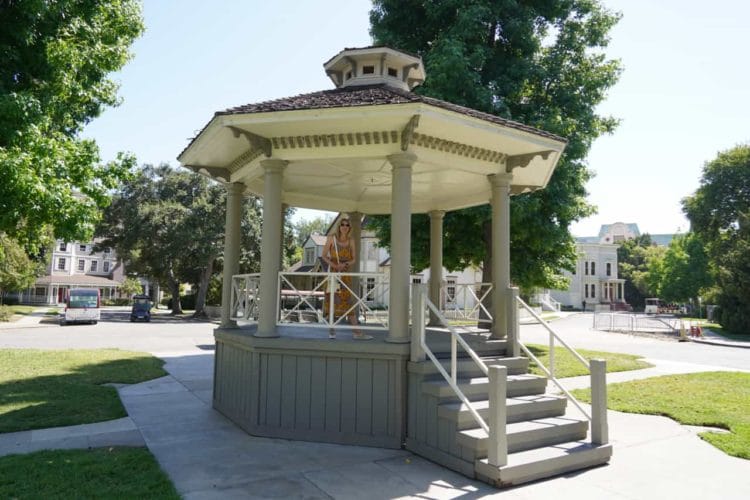 You’ll see many cool locations and learn many facts from your tour guide as you’re driving around, but this is usually one of the first stops. I say usually because not every tour is the same. Depending on what’s filming that day, your tour guide may take you different locations. There’re lots of buildings and areas that may look familiar to you in this town square. This is my wife Jackie in a gazebo you may recognize from “Gilmore Girls” the Muppets, or many other TV shows or movies.

This “church” was also featured in “Gilmore Girls” and many other shows. 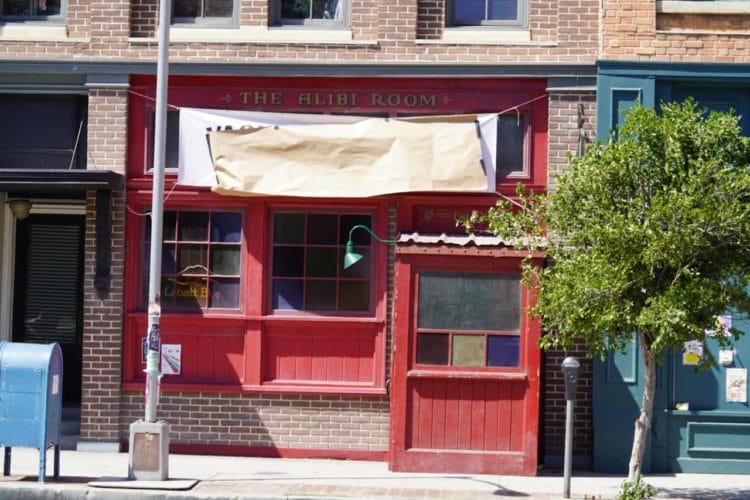 This storefront was being used for filming earlier in the day. We were told it was for the show “Shameless”. 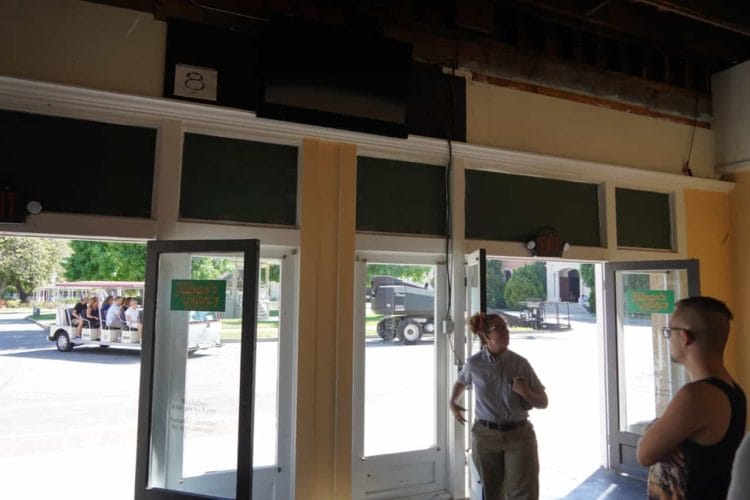 This is looking out from a storefront near the one being used for “Shameless”. Notice how bare it is. While it could be used for filming inside with some fixing up, it’s mostly used for exterior shots. 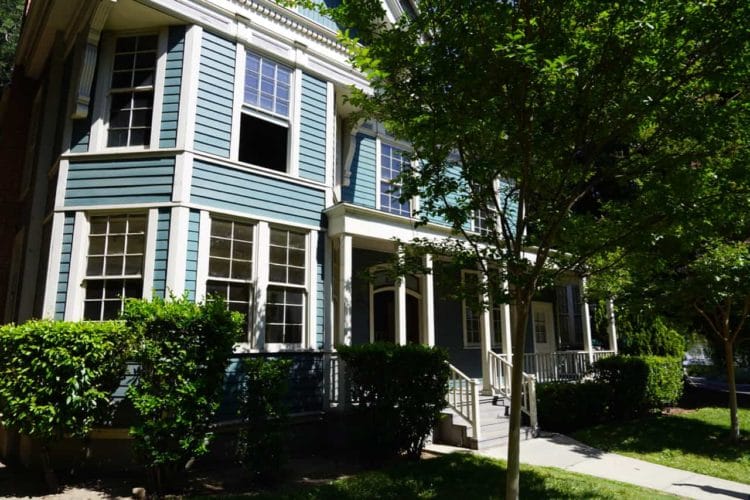 Just on the other side of the square are a row of houses. We got to go inside this one, which has also been used on “Gilmore Girls” and “Friends”. 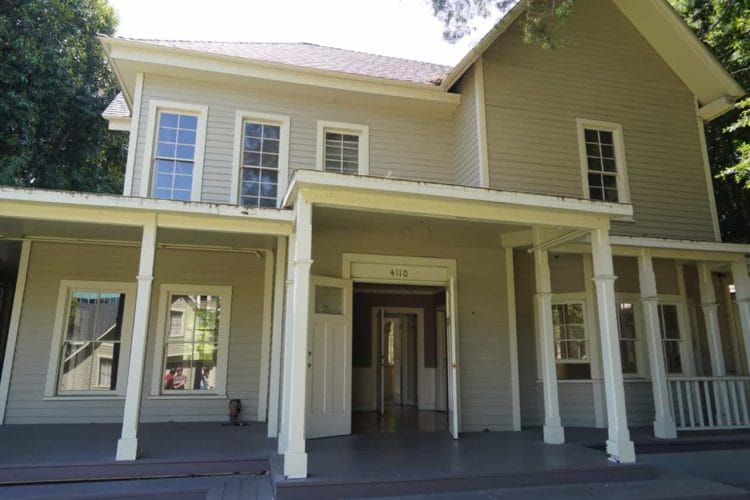 When we walked through the house in the previous photo and walked outside to the “backyard” and looked up at the house, we saw this. Yes, it’a a two-sided house where both sides look like the front of the house. 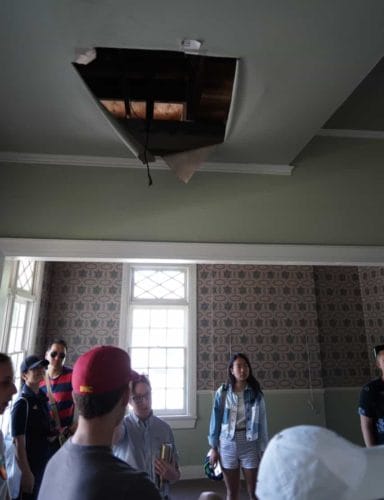 This is inside the house. You can see the ceiling is just made of a latex-type material. When filming, they could pop a camera through this hole, or remove the ceiling altogether. When each production comes in to film, whey first have to fix up the house set and furnish it. 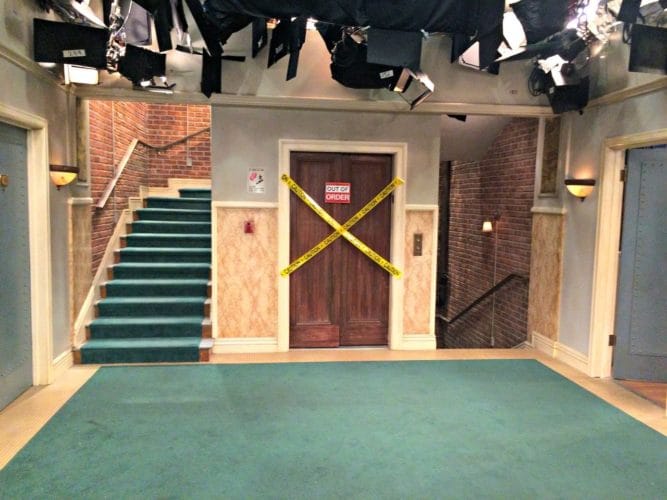 As a fan of “The Big Bang Theory”, this stop was one of my favorites. This isn’t my photo, as we weren’t allowed to take any photos inside the set. It’s from “Glamor” magazine’s website. While we had to look at the set rooms behind glass, “Glamor” got to walk all around the set. By the way, there’s only one set of stairs. They just film them walking these same stairs over and over as they are walking up to their apartment, moving the caution tape each time to make it look like a different floor. 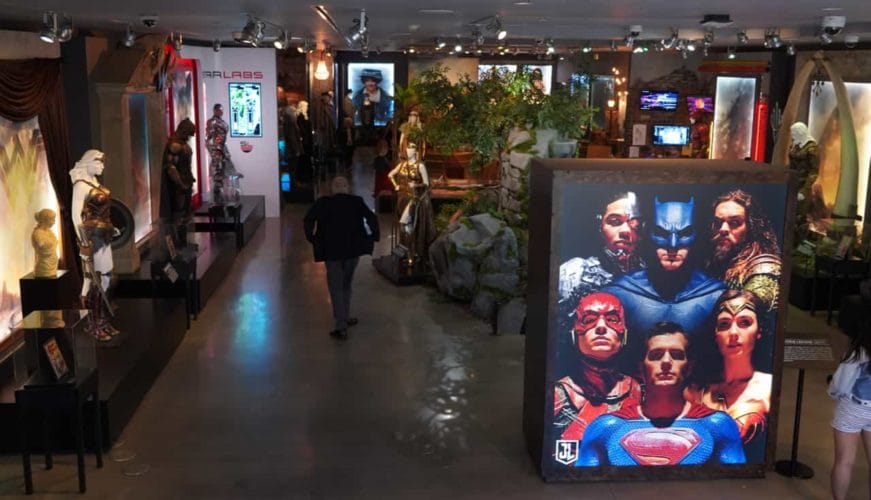 Our next stop was to a gallery of props. Downstairs was the DC Universe Exhibit with costumes, props and more from the latest “Justice League” and “Wonder Woman” movies. 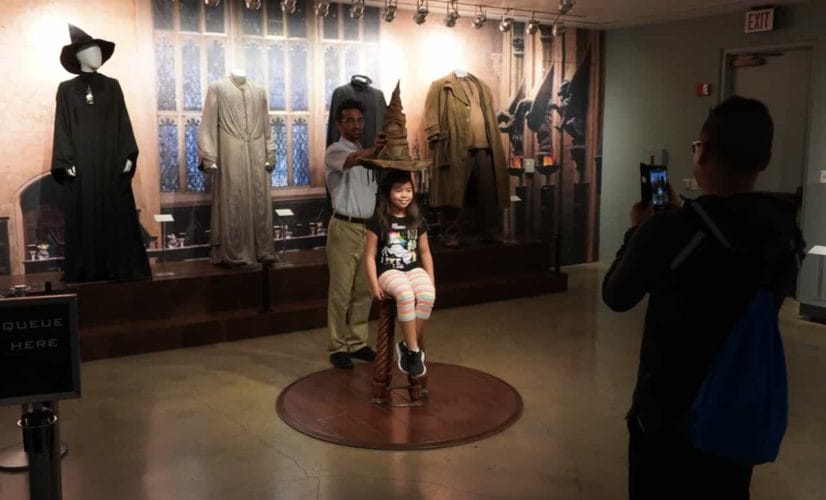 And upstairs was a Harry Potter and Fantastic Beasts exhibit. In the back of the gallery you could get sorted by the Sorting Hat. We were at this gallery for about 10 to 15 minutes and this was also the place for our restroom break. Although video isn’t allowed on most of the tour, this gallery allows it. Here’s a look at the Harry Potter area taken during a tour we did last year. 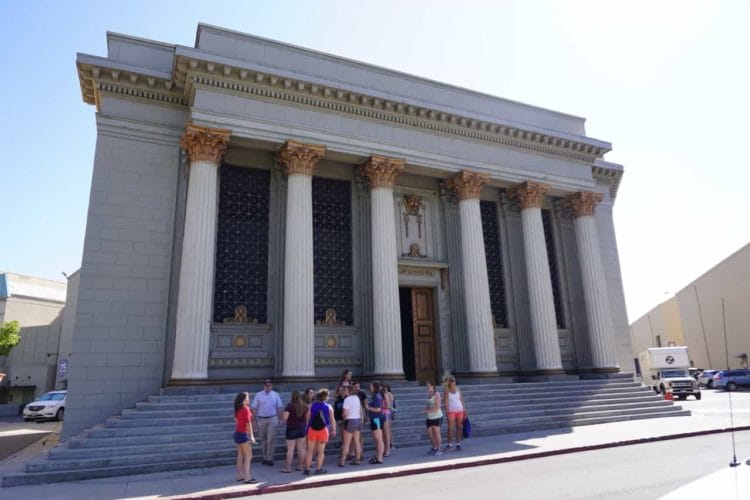 On our way to our next stop, we passed by this “courthouse”. It has been used in many productions but I recognized it from the old “Batman” TV show. Speaking of Batman … 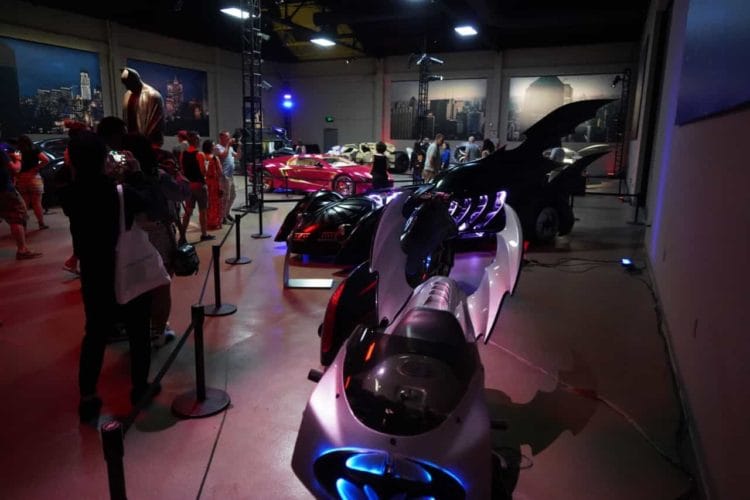 The Picture Car Vault stop on the tour has been transformed into the Batcave with various Batman movie vehicles on display. Here’s a look around: 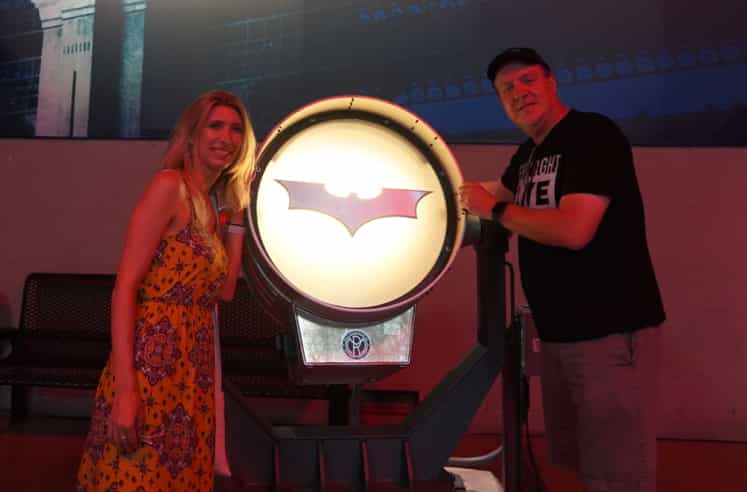 If you ask, they’ll take your photo with any of the cars, or the Bat Signal. They may even let you turn the signal on and off yourself. 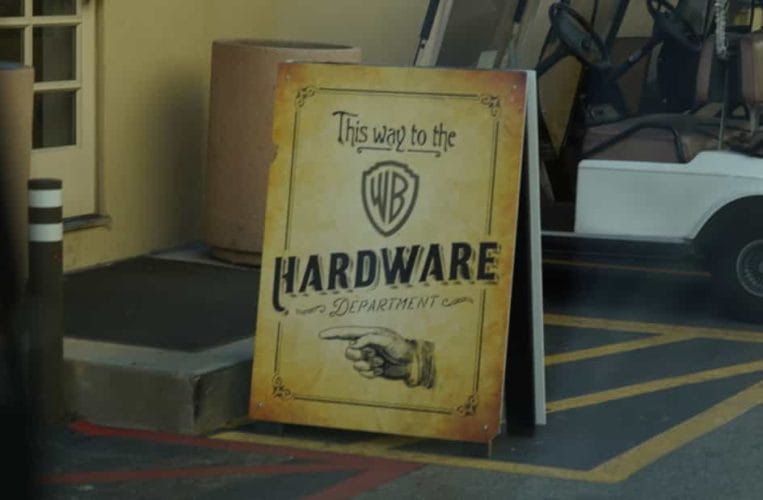 A fun Harry Potter-esq sign we passed on the way to our next location. We also slowly drove by many other soundstages and the prop warehouse. 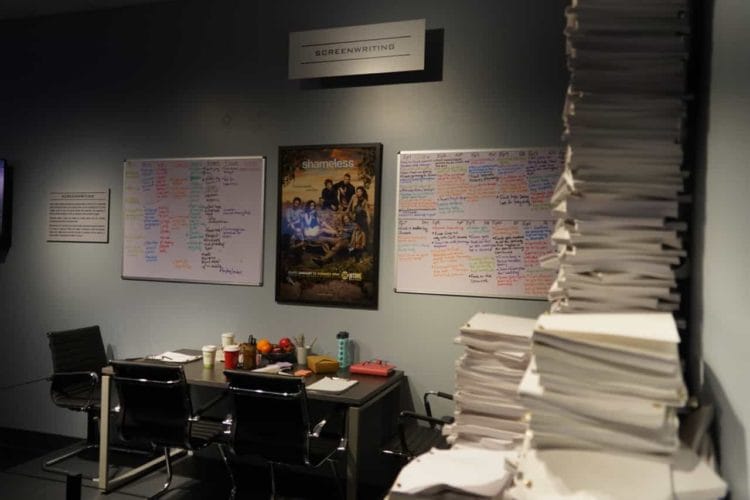 Our last stop was at Stage 48. There are lots of props, information, displays and hands-on activities inside. Let me show you a few … 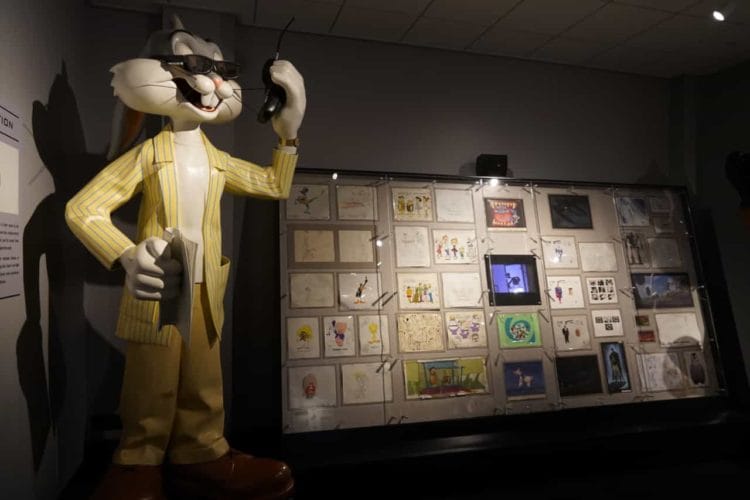 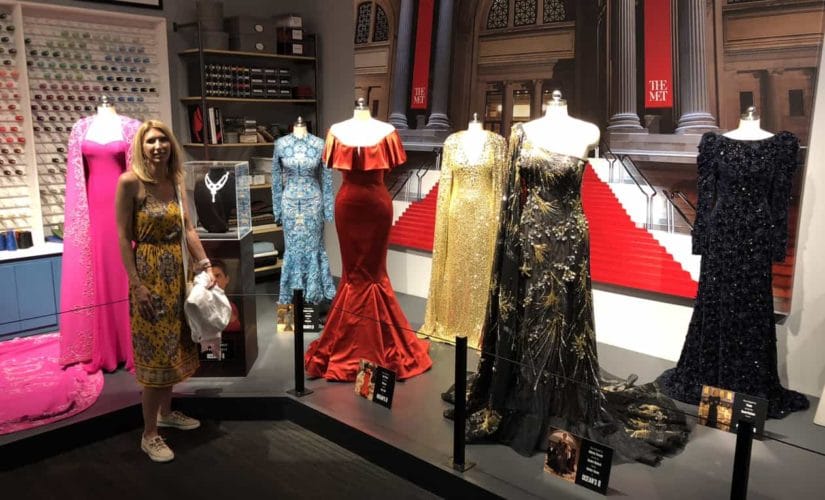 This display was brand new when we visited, which shows you that many of the displays change often, tied to the latest movie releases. These are the actual dresses used in “Oceans 8”. 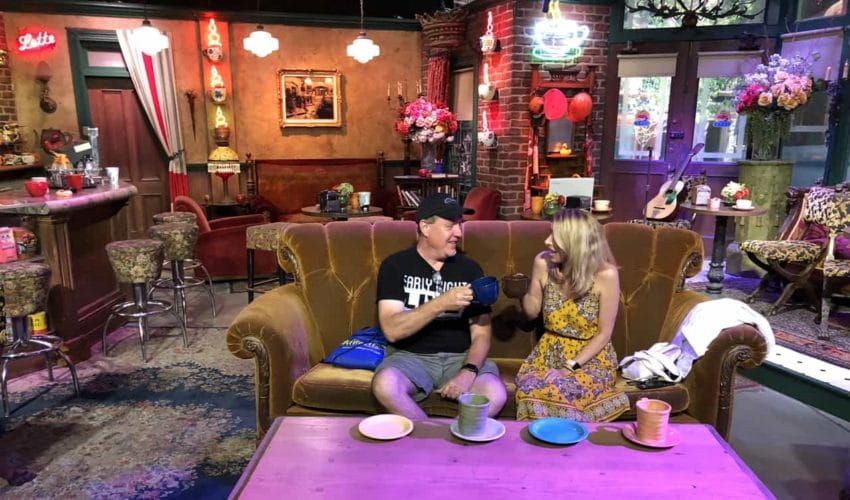 A photo opp on the “Friends” set. You can also act out a scene here. 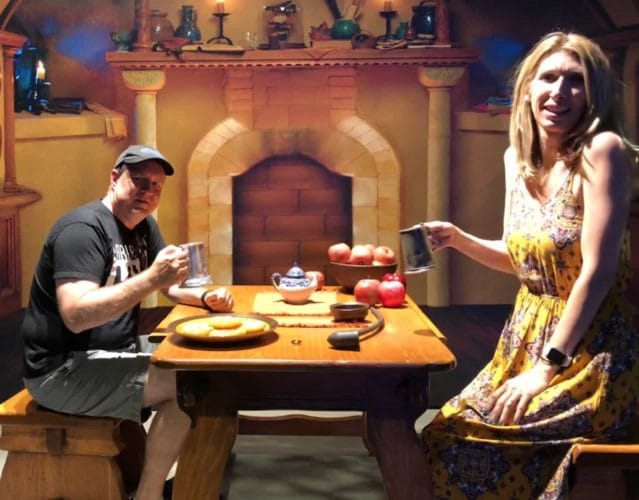 An optical illusion from “The Lord of the Rings”. 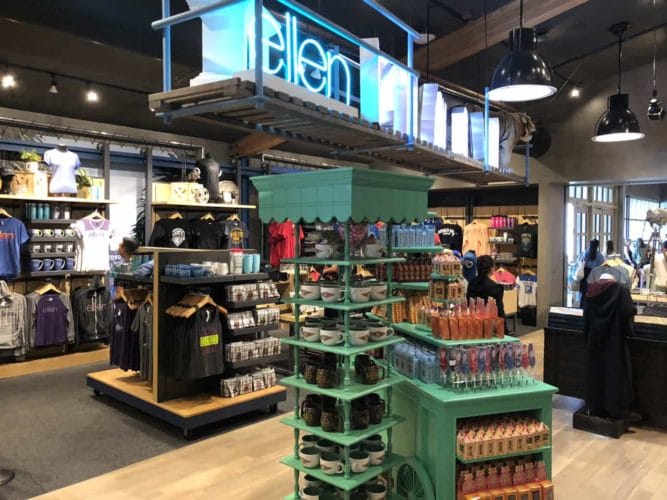 Of course there’s a gift shop, which I was happy to browse. There are many cool items you can only find here.

A large portion of the shop is dedicated to Harry Potter, and they also have some exclusive items, or at least items I haven’t seen at any of the theme parks. 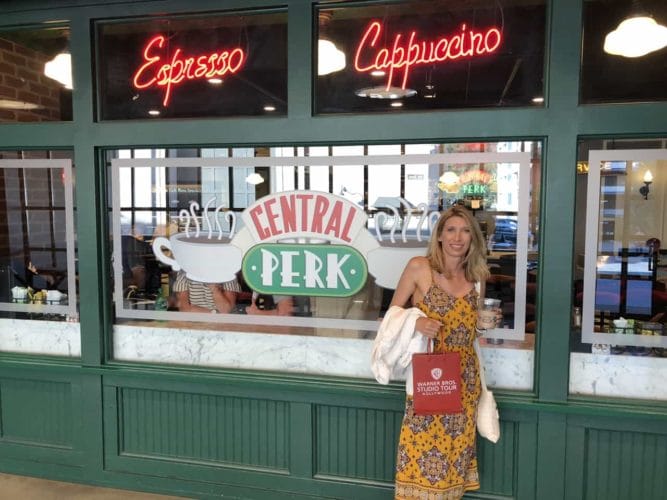 You can end your day in a real Central Perk coffee shop right next to the gift shop.

I highly recommend doing the tour when you get a chance. As these are real sets, you may even spot a celebrity, although we didn’t, unless you count the dog from “Fuller House”. Tours are daily and you should make reservations ahead of time from the Warner Bros. Studio Tour Hollywood website. They also have some special events, like the upcoming Horror Made Here event. For even more from the tour, here’s an episode of “Attractions Adventures” when Quinn and I took the tour last year:

In the Loop: Kings Island is saying R.I.P to one of its coasters