The house is described on the official website as this:

There is strength in numbers and you must band together to make it through many of the iconic settings made famous by the critically-acclaimed AMC hit, The Walking Dead. As the city is crawling with hordes of “walkers,” the issue of your becoming one of them is not a question of if, but when. 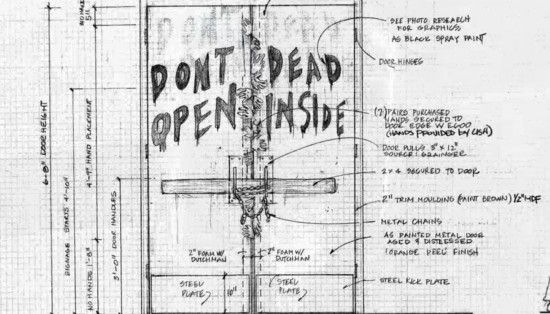 The Golden Globe-nominated, Emmy Award-winning, series The Walking Dead is based on the comic book written by Robert Kirkman and published by Image Comics. The series tells the story of the months and years that follow after a zombie apocalypse. It follows a group of survivors, led by police officer Rick Grimes, who travel in search of a safe and secure home.

Universal Studios’ Halloween creative teams are working with AMC to create an authentic experience that is true to the Emmy Award-winning hit series. The haunted mazes on both coasts feature eerily authentic, elaborately designed, movie-quality sets that include some of the most iconic locations and scenes from the show. Mobs of undead walkers bring to “life” the vicious, hungry, zombies from the show.

“We want people to experience the same terror of the walker-filled reality our characters faced in seasons one and two – and will continue to face in our third season,” said Greg Nicotero, co-executive producer and special effects make-up artist for the series. “Our collaboration with Universal Studios’ creative teams is exciting as we work to truly capture the essence of the show.”

This first piece of concept art shows the famous door from the hospital scene in the first episode of the show. 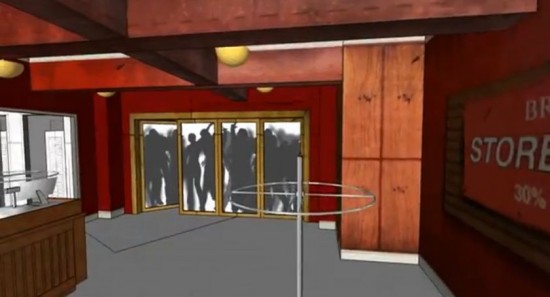 This second piece of concept art shows the mall in Atlanta where Rick meets some of the other survivors.

“You are going to put you in the footsteps of the characters of the show” says John Murdy, creative director at Universal Studios Hollywood. “You are going to have to try to survive the zombie apocalypse only now your not in your living room watching it, you are living it.”

Check out the trailer for the house which Universal Studios released this afternoon:

Going to Florida 12 of oct & can’t wait to go to HHN. Is every night the same or is it better a weekends?

@mark the event is .mostly the same every night u go weekends are super busy but the park is open to 2am. Thursday or Sunday are the better days to go unless ur rich and pay the extra 80 bucks for a express pass which u can skip all lines once. I have been to 4 hhh so far all great and this one is shaping up to be great as well.

a clown, a caretaker, a director, a storyteller, an usher, fear, and lady luck have led the way the end is near a new herald of fear will unleash the end of the world as you know it it is never too soon to start panicking.

21 years 21 cycles it is the 22nd cycle as years pass his powers grow stronger you shall face him you shall bear his mark xx. He is the darkness of your shadow you shall feel his grasp. a new age of darkness will reach its peak goodbye tick tock meet your doom.

he is eternal doomsday will begin in less than 62 days.

I can wait to. I enter a contest the other day and I hope win. I love the Walking Dead.