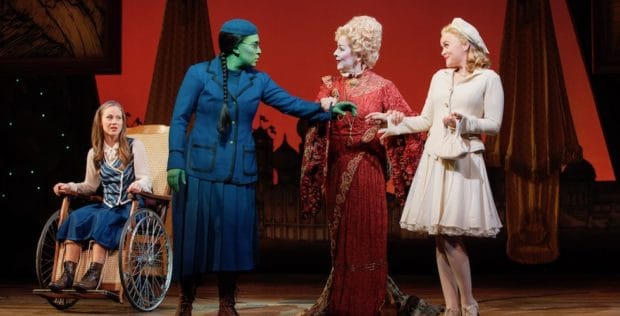 “Wicked” is definitely my favorite musical stage production, I can’t get enough of it. This is the first time I’ve seen a production at the Dr. Phillips Center that I’ve seen before.

Nearly everyone knows the story of Dorothy’s visit to Oz, but “Wicked” isn’t her story, it’s the Wicked Witch of the West’s. The Witch, who’s real name is Elphaba Thropp (Jessica Vosk), has always had a tough life. Ever since she was born with her trademark green skin and unexplainable powers, people ran from her and screamed when they saw her face. It’s no secret that even her father (Wayne Schroeder) hates her. But when Elphaba is sent to help her handicapped sister (Kristen Martin) to study at Shiz university, she discovers her uncontrolled powers can be harnessed and used for good. Unfortunately for her, studying at Shiz isn’t very simple, especially when her roommate Glinda (Amanda Jane Cooper), the most popular girl in school, has the whole student body loathing her. As the story progresses, things start looking up for Elphaba as she looks forward to studying with the wonderful Wizard of Oz himself (Fred Applegate), but as we all know, sooner or later, all of Oz will be on a witch hunt hell-bent on melting her.

The set and music was amazing as always. I haven’t gotten the songs out of my head since my drama teacher first played the soundtrack while we were doing our bell work back in middle school, and I certainly won’t any time soon.

I already have tickets to go back and see it again, this time front row center. I highly encourage everyone to try and attend this beautiful production, by any means they can, whether it be at the Dr. Phillips Center for the Performing Arts from now through Jan. 29, or wherever you can.

A Newby’s View:
I brought my friend Riley Wackernagel to the show with me. They hadn’t seen any productions outside of our high school before. Here’s a small summary of their experience.

“I’m an art kid – but my second go to is always theater. From the aids crisis in ’90s New York, to an accountant trying to become a producer, I love musicals. Yet I’ve never seen one in a real theater before, and I’ve also never seen Wicked! As soon as I walked in and saw the metal dragon watching over the seats, I knew tonight was going to be amazing.

“The production was large to say the least. Everything from the music, to the huge clockwork set changes and Fiyero’s amazing thighs – everything was perfect. By the time Elphaba was defying gravity and intermission rolled in, I felt like I was finally able to blink. The whole show was filled with so much talent, I didn’t want to miss a second. And without realizing, I finally let go of my breath, which I probably started holding onto sometime during a solo. I felt so immersed, I might as well have been in Glinda’s bubble. I definitely will be seeing more shows at the Doctor Phillips Center, I guess you could say that I’ve changed – “for good”.”

In the Parks:
You can visit Oz yourself on The Great Movie Ride at Disney’s Hollywood Studios anytime. In the retired “Land of Oz” area of Universal Studios Japan, there used to be an abbreviated one-act version of “Wicked” that was performed in Japanese daily. It closed in 2011 to make way for Snoopy Studios.

Wicked After Dark:
The Center Orlando and members of the National Touring Company of Wicked will host “Wicked After Dark,” a charitable cabaret concert benefiting Broadway Cares/Equity Fights Aids and The GLBT Center of Central Florida.

Wicked After Dark is produced by the company members of Wicked themselves. This post-Wicked performance event is an opportunity for the company to step out of their roles in the musical and kick up their heels performing some of their favorite non-Ozian material. The evening will kick off with an opening act by Wicked alumna, Broadway veteran, “X-Factor” star, Nashville recording artist and Florida native, Rachel Potter and her band, Steel Union. Song and dance performances by the company members of Wicked will follow including a live auction.

Wicked After Dark will include exclusive Wicked charity merchandise for purchase and live auctions featuring opportunities to join the company backstage at the Dr. Phillips Center. Live auction items include (to name a few):
· A chance to watch the “greenifying” of OZ’s most infamous lady plus a backstage tour and two house seats for the show.
· “Behind the Emerald Curtain” – Tour backstage, watch the show from the stage manager’s call desk and the soundboard.
· Win a walk-on role in Wicked. This is a once-in-a-lifetime opportunity to experience being in Broadway’s biggest blockbuster. You can win the chance to wear a Tony Award-winning costume and be in three scenes of Broadway’s favorite musical.

Wicked After Dark will be held on Thursday, Jan. 26 at The Abbey in downtown Orlando. The performance begins at 10 p.m., with a reception for VIP ticketed guests beginning at 8:30 p.m.

Tickets can be purchased at TicketFly.com. VIP admission is available for $75, which includes a pre-show reception from 8:30 to 9:30 p.m., reserved seating, catered light hors d’oeuvres, and two complimentary drinks. Limited premium VIP tables are available for $400 per table (four seats per table) placing you at the foot of the stage with the best seats in the house. General admission (standing room) tickets are available for $35.