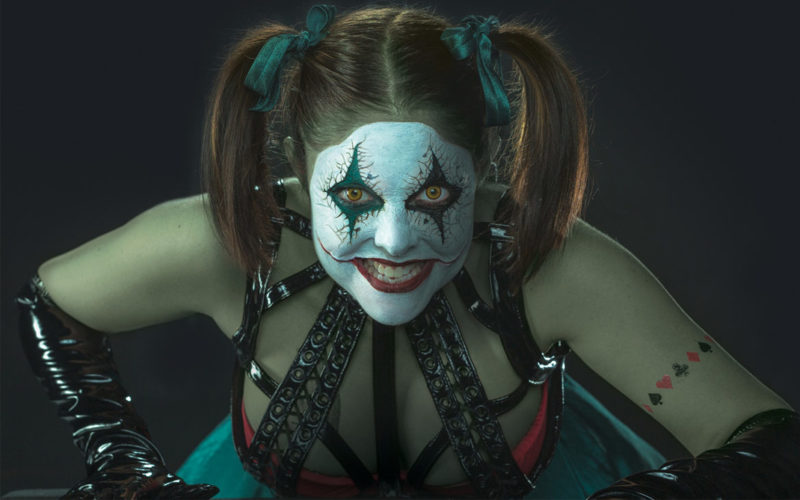 You can buy tickets now to face Chance, the new icon of Halloween Horror Nights 26 at Universal Orlando.

While theme park fans are lined up outside Islands of Adventure’s soon-to-open Skull Island: Reign of Kong attraction hoping for a “chance of Reign,” Universal Orlando has announced that tickets are now on sale for Halloween Horror Nights 26, which will feature the “reign of Chance,” because Jack the Clown’s longtime companion has been elevated to the event’s new icon.

This year, Jack Schmidt’s right-hand woman Chance will step into the spotlight as the star of the nation’s most popular Halloween event. Universal Studios Florida will become her stage – where she will take guests on a journey inside her twisted mind as she struggles with what is performance vs. what is real. Guests will find themselves in a surreal world of horror filled with nine all-new haunted houses, elaborately sinister scare zones and outrageous live shows. They will even come face-to-face with Chance in her very own demented haunted house and scare zone.

According to statement from Halloween Horror Nights creative director Michael Aiello, “for us, Halloween Horror Nights 26 literally takes place where we left off. The aftermath of the carnage is still fresh and Chance finds herself incarcerated for the crimes of last year. With the “Jack in the Box” on an evidence shelf somewhere waiting for someone to turn the crank once more, Chance bides her time within her cell. But this is not a tragedy for her. This prison is a toy box. It’s within the confines of her cell that she enters her horrific “theatre of the mind”. She knows that the acts committed inside her mind will manifest in the real. Both equally deranged and gothically beautiful. So, we have two very distinct states of mind for Chance—as well as two distinct looks. Terror itself, ripped in half… the shockingly real and the grotesquely imagined. This is an evolved Chance taking her rightful place atop Halloween Horror Nights.”

How these worlds collide and the amazing nightmares that are brought forth as a result is what Halloween Horror Nights 26 is made of. Our amazing line-up of houses and scare zones—drawn from movies, TV shows, and original stories—all live within the confines of her terrifying theatre.

Halloween Horror Nights will run select nights from September 16 to October 31 at Universal Studios Florida. More information about the event will be released over time. For more information, including ticket offers and vacation packages, visit www.HalloweenHorrorNights.com/Orlando.

While waiting for your chance to face Chance this fall, relive the terror of Halloween Horror Nights 25 with this September 2015 episode of Attractions The Show:

AD: Click for the best prices on Universal Studios Tickets.

Voyager Space and Hilton to elevate the...