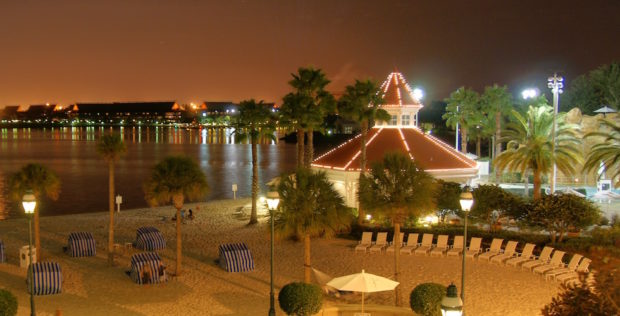 A tragedy occurred on Tuesday evening at Walt Disney World when, while playing in the water near Disney’s Grand Floridian Resort and Spa, a two-year-old boy was reportedly grabbed and dragged into the water by a large alligator.

According to officials, the initial reports of the incident came in at 9:16 p.m. Tuesday evening around the time the resort was hosting a movie night on the beach. The beach area where the movie plays has several “No Swimming” signs.

Orange County Sheriff Jerry Demmings reported that the boy’s father, upon seeing his son grabbed by the gator, rushed into the water in an unsuccessful attempt to save him. Rescue teams were immediately dispatched and began searching for the toddler. Rescue workers continued searching the Seven Seas Lagoon for the toddler until noon today when the Sheriff’s office hosted a press conference and stated, “We know that we are now working on recovering the body of the child at this point.”

Disney pools and beaches in the area have remained closed while recovery efforts have taken place. The Orlando Sentinel reports that several gators have already been pulled from the Seven Seas Lagoon, euthanized and examined, though nothing has been discovered so far.

What to do if you encounter an alligator...