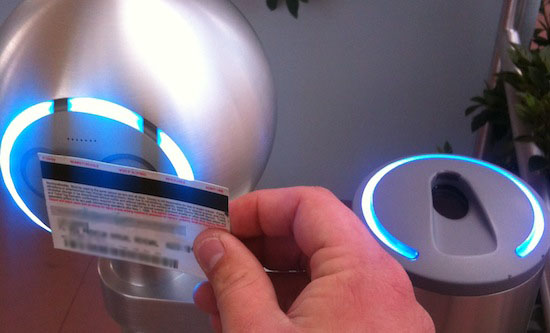 Walt Disney World is moving ahead with their plans to make it easier for guests to enter their parks and make purchases with the roll out of RFID readers all across their property. The readers have appeared at various retail locations and will be used at all four Disney World theme parks starting this week.

RFID (Radio-Frequency IDentification) uses radio-frequency electromagnetic fields to transfer data wirelessly at short distances. All Disney resort guests are now receiving “Key to the World” cards with RF technology embedded in them. This technology will eventually be added to all Disney World tickets as well. To identify themselves, guest just need to wave the card over the RF sensors. 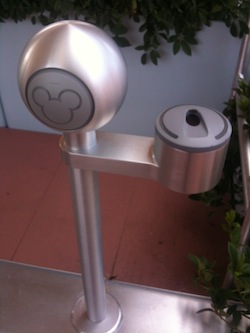 Although RF technology was tested about a year ago at the entrance to Epcot, it first appeared in general use at Disney World in the resorts. Over the past year, all of the room door locks were changed to RFID locks. To unlock their room door, guests just need to wave their Key to the World card by the door handle.

This week, RF sensors were added to many retail locations and will also be available for entrance to all four Walt Disney World parks. Until a full conversion takes place, each park will offer the traditional turnstile entry, but will also have a separate entrance for those with the Key to the World cards. Guests will simply touch their card on a Mickey symbol reader, then place their finger on a scanner, then enter the theme park without needing to go through a turnstile. This will be especially helpful to guests with kids and strollers.

With the touch to pay scanners, for purchases under $50, guests just need to wave their card over the readers. For purchases over $50, the guest must input a PIN number, which they will set up at check-in.

More touch to pay and touch to enter locations will be added over time. All pay locations across Disney property are expected to be able to use the RF technology by mid-January.

Here’s a video of the Fastpass+ system testing at Magic Kingdom:

Justin Bieber, Ke$ha and others kick off the holiday season at Jingle Ball 2012 in Tampa

No more finger cot?? So anyone can use your ticket to get in 🙁

@LB Finger Scan well still be required in order to get in with the ticket!

Yes, finger scanning is still required for park entry. As the article states, “Guests will simply touch their card on a Mickey symbol reader, then place their finger on a scanner, then enter the theme park without needing to go through a turnstile.”

Wow this new tecnology will make the lines a lot smaller and faster to enter the park.

Wow – what a terrific waste of millions of dollars. I would rather see that kind of money be spent on creating new attractions. It doesn’t really speed up entry to the park that much, certainly not enough to justify the millions spent. Seconds saved to enter parks with old attractions that are not kept up. Awesome.

wow i find this great
I have a question : “will be used at all four Disney World theme parks starting this week”… in Paris too?

We’re not sure about Paris. Our report is just about Walt Disney World in Florida.

Not to insult, but to posters who believe this is in any way whatsoever to improve any guests experience…you are delusional. Disney’s concern in this investment is more revenue…off of you. The experiences are being cut a Disney regularly, it’s a large mall with meet and greets now, with very few attractions for increase in rooms and DVC

Stars in the Parks: Lady Gaga with...