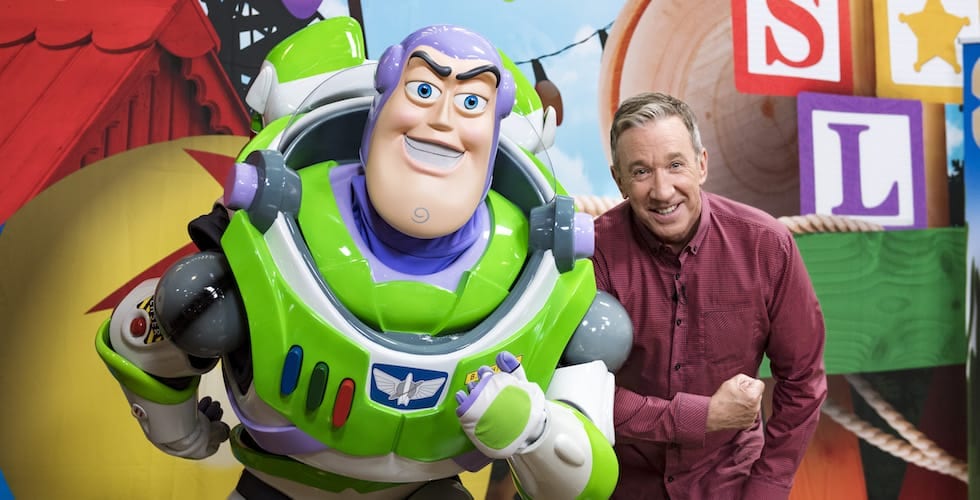 Tim Allen strikes a pose with Buzz Lightyear after taping an interview for “Good Morning America” and “Nightline” airing on ABC, Wednesday, May 2. Photo by Chloe Rice.

This exclusive access to the new land begins with a live welcome from the all-new, 11-acre Toy Story Land, hosted by Paula Faris. Inspired by the Disney/Pixar film, “Toy Story,” this new land will shrink guests down to the size of a toy as they are transported into the world of Andy’s backyard.

Viewers will get to hear from Walt Disney Imagineers, and get front-row access to the Slinky Dog Dash coaster, Alien Swirling Saucers and Toy Story Mania! Plus, they’ll get a first look at the new merchandise, themed food and beverage and entertainment offerings coming to the land.

Tim Allen, who provides the voice for Buzz Lightyear, will join in on the fun with special appearances on both “Good Morning America” and “Nightline.”

Hosts Sarah Haines and Sunny Hostin will tour the new land on “The View,” and then “The Chew” will showcase some of the delicious treats coming soon from Woody’s Lunch Box, the quick-service restaurant for Toy Story Land.

“Nightline” will wrap up the day’s exclusives with an in-depth look at “Toy Story,” and how it and other Disney/Pixar stories come to life at the Disney Parks.

Beer is back at Busch Gardens Tampa Bay this summer

The whole day was a joke. The most was featured on GMA and The View, with just a recap of the same stuff on Night line (nothing new which was a shame because they promised more of an in depth explanation of how the movies are turned into rides).
I also was interested to see the segment on the Chew, but that too was very disappointing. They showed the 2 new foods, but didn’t explain how they were made, nor did they go into any other foods that would be available or any of the drinks.
Overall, a very disappointing promotion. I was expecting more from ABC.