For the first time ever, Universal Studios Hollywood is letting guests experience a “lights on” walkthrough of the new “Stranger Things” maze during the day before it comes to life at night during Halloween Horror Nights. 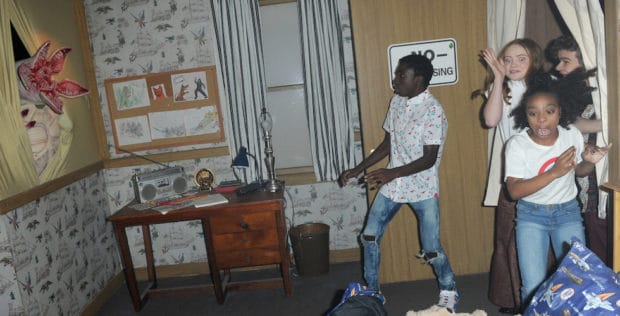 From Monday, Oct. 29 – Friday, Nov. 2, guests can take this self-guided tour of the maze, which is included in the price of daytime admission to the park. Photos and video will not be allowed during the tour.

In other exciting Halloween news, Universal Studios Hollywood is inviting kids to dress up in their Halloween costumes for Trick-or-Treating with some of the park’s characters on Saturday, Oct. 27 and Sunday, Oct. 28.

From 10 a.m. – 4 p.m., characters will appear in their Halloween best, like Hello Kitty as The Bride of Frankenstein, Illumination’s Minion Monsters, SpongeBob SquarePants and Patrick Star, Scooby Doo and the gang, Curious George, Woody Woodpecker, Dracula, Frankenstein, and The Mummy.

Other activities will include a special Halloween Party from 11 a.m. – 2 p.m. in the Plaza with a live DJ, music, games and a costume showcase from 1-2 p.m. Halloween treat decorating will be available for purchase, and all kids under the age of 12 will receive a free carnival game voucher for Super Silly Fun Land, located by the “Despicable Minion Mayhem” ride, or Krustyland’s Carnival Games by “The Simpsons Ride.”

As one last surprise, Universal Studios Hollywood has extended this year’s run of Halloween Horror Nights. Due to popular demand, guests can get their scare on for one extra night on Sunday, Nov. 4.

To learn more about other Halloween offerings at Universal Studios Hollywood, visit UniversalStudiosHollywood.com.

Check out our video of some of the cute characters in their Halloween costumes below: