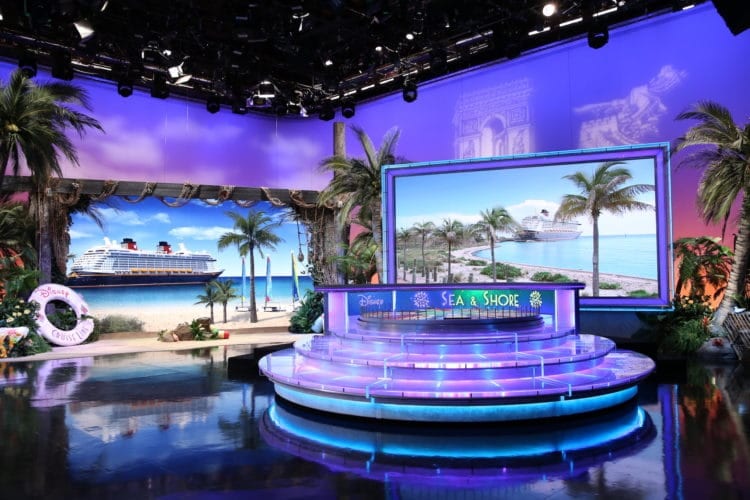 After airing a week of shows from Walt Disney World during the holidays, Wheel of Fortune is teaming up with Disney again this week.

“Disney Sea & Shore Week” will highlight the Disney Cruise Line every night this week through Jan. 12, 2018. Disney is providing a robust selection of prizes for contestants and viewers during the shows. Contestants will be spinning for Disney gift cards, as well as Disney Cruise Line trips, vacations at Aulani – A Disney Resort & Spa in Hawaii, and Adventures by Disney prize packages. “Prize Puzzles” will also be Disney Vacation Club trips.

Though three weeks worth of shows were taped at Epcot back in October, this week’s episodes were taped at Wheel of Fortune’s home studio in Culver City, Calif., in November. The Epcot episodes will air again the week of Feb. 12, showcasing married couples and Disney’s Fairytale Weddings, then once more the week of April 30 showcasing Disney fans at Walt Disney World.

Viewers at home can enter a special sweepstakes to win a Disney cruise to the Bahamas this week. Details on how to enter can be found at WheelOfFortune.com. Check your local listings for channel and time that Wheel of Fortune airs.

Catch the video below for our look at the taping at Epcot from October and an interview with Pat Sajak and Vanna White, and be sure to catch our Feb. 14 episode of “The Attractions Show” for more behind-the-scenes glimpses at Wheel of Fortune.

I tried several times to enter but your server kept crashing!!! HANDPICKED AVOCADO

I’m trying to send the puzzle for Tuesday night, please except, My grandchildren are very excited about this trip and so am I. ”HANDPICKED AVOCADO’ is the answer.

Having trouble entering the answers.