Boy fulfills his wish to become a stormtrooper at Disney

For 13-year-old Liam, there was no greater wish than to become a stormtrooper for a day. Through Make-A-Wish, his dream was made a reality during a trip to Walt Disney World. 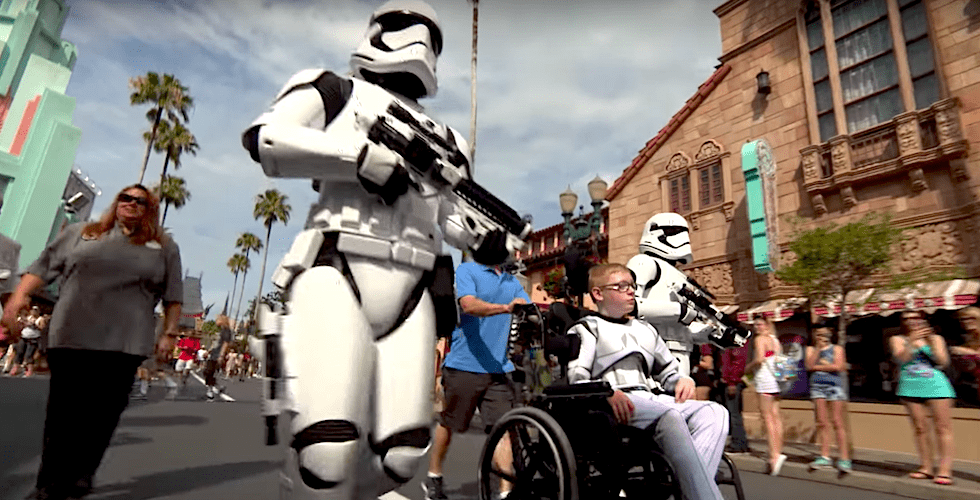 13-year-old Liam was recruited into the First Order through the help of Make-A-Wish and Disney.

Having battled a critical illness for years, Liam is brave in his own right. During his Make-A-Wish trip to Walt Disney World, he was recruited to join in on a different kind of battle – one set in a galaxy far, far away.

Over at Disney’s Hollywood Studios, Liam joined in on the March of the First Order and made his way through the park under the command of Captain Phasma. After the march, he was able to have a special meet-and-greet experience with a stormtrooper. You can watch his dream come true in the video below:

Liam’s wish to become a stormtrooper is one of over 130,000 wishes that Disney and Make-A-Wish have granted together since 1980. Currently, Disney grants more than 10,000 wishes annually in collaboration with wish-granting organizations around the world.

Over the past few weeks, Disney has been hosting the “Share Your Ears” campaign, which gives Make-A-Wish $5 for every photo posted on social media using the hashtag #ShareYourEars – up to $1 million. Today, Nov. 27, is the last day for you to share your photo on Facebook, Twitter, and Instagram and support the wishes of children in need.

Another way you can support granting children’s wishes is by donating to our Walt Disney World Marathon team. We’re raising $10,000 to donate to Give Kids the World Village, and we need your help! You can learn all about our donation goals here.

To learn more about Make-A-Wish, head to Wish.org.