Cast announced for ‘The Animatronicans: Under New Management’ at 2019 Orlando Fringe

The Animatronicans, the hit theme park spoof that premiered at the 2016 Orlando Fringe Festival, is returning this May in an all-new Under New Management edition, which will feature a reunion of the entire original cast, along with two new faces that may be familiar to Central Florida attraction fans. 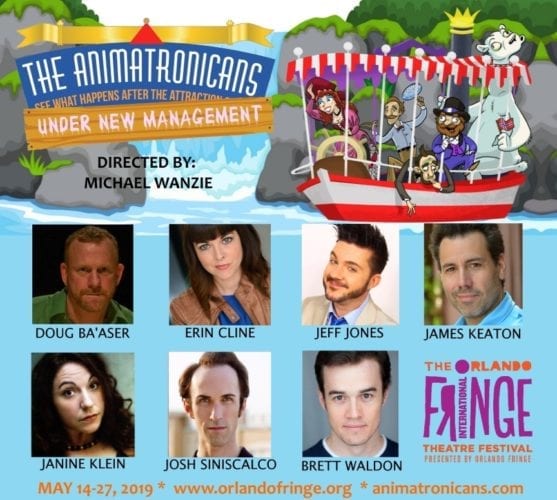 The newly announced cast of ‘The Animatronicans: Under New Management’ is cruising to the 2019 Orlando Fringe Festival.

Jeff Jones, playwright and co-star of The Animatronicans, has announced the cast of The Animatronicans: Under New Management, which he describes as “not a sequel, it’s simply another episode” of a live on-stage sitcom about Audio-Animatronic figures living together outside Walt Disney World. Returning to their original roles are local actors Doug Ba’aser (John from Carousel of Progress), Josh Siniscalco (Abe Lincoln from Hall of Presidents), James Keaton (Polar Bear from Maelstrom), and Jones (Dreamfinder from Journey into Imagination). Janine Klein is also back, playing a new human role as a “wacky neighbor.”

These Animatronican veterans will be joined by newcomers Brett Waldon (a Universal Orlando performer and SAK Comedy Lab impro instructor) as a “loveable friend,” and Erin Cline, who is “coming aboard as the beloved, yet now, unemployed Redhead.” The show will reteam Cline, who originated the role of Chance for Universal Orlando’s Halloween Horror Nights, with Keaton, who portrayed her psychotic paramour Jack the Clown.

The new comedy will be directed by Michael Wanzie, and is scheduled to debut at the 2019 Orlando Fringe Festival, which will be held on May 14-27 in Orlando’s Loch Haven Park. Jones is keeping the plotline under wraps, but teases that “much like the last episode we’re tackling another classic sitcom storyline with our own twists.”

For more information visit Animatronicans.com and watch these videos:

‘The Animatronicans’ to return in Orlando Fringe double...

Disney-inspired comedy The Animatronicans opens May 18 at...

A look at the second annual Car...