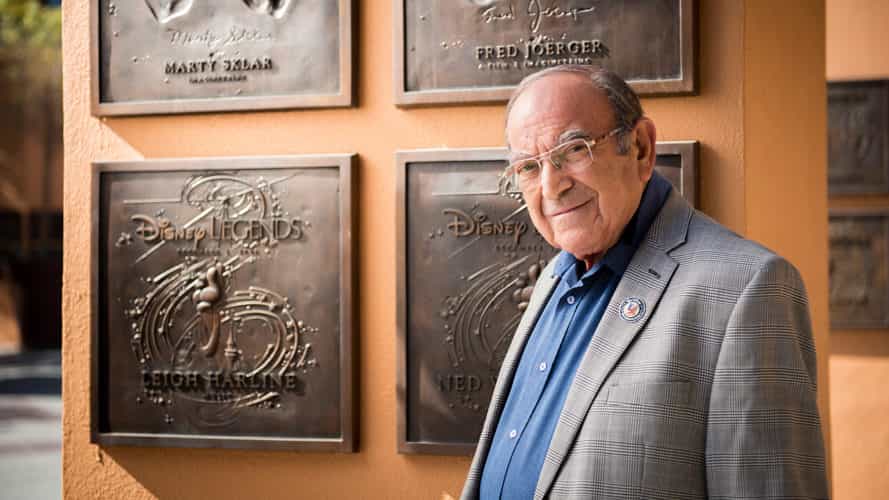 Disney Legend Marty Sklar has passed away at age 83.

We are sad to report that Disney Legend Marty Sklar, an Imagineer who worked with Walt Disney during the early years of Disneyland, died yesterday at the age of 83.

Legendary Disney Imagineer Martin A. “Marty” Sklar passed away in his Hollywood Hills home on Thursday, July 27, 2017. During a career spanning 54 years, Marty worked closely with Walt Disney and was instrumental in creating, enhancing and expanding Disney’s creative vision. Sklar was named a Disney Legend in 2001.

“Everything about Marty was legendary – his achievements, his spirit, his career,” said Bob Iger, Chairman and Chief Executive Officer, The Walt Disney Company. “He embodied the very best of Disney, from his bold originality to his joyful optimism and relentless drive for excellence. He was also a powerful connection to Walt himself. No one was more passionate about Disney than Marty and we’ll miss his enthusiasm, his grace, and his indomitable spirit.”

Born in New Brunswick, N.J., on February 6, 1934, Marty was a student at UCLA and editor of its Daily Bruin newspaper when he was recruited to create The Disneyland News for Walt’s new theme park in 1955. After graduating in 1956, he joined Disney full-time, and would go on to serve as Walt’s right-hand man—scripting speeches, marketing materials, and a film showcasing Walt’s vision for Walt Disney World and Epcot. During this period, he also joined WED Enterprises, the forerunner of Walt Disney Imagineering, and he would later become the creative leader of Imagineering, leading the development of Disney theme parks and attractions for the next three decades. He retired as Executive Vice President and Imagineering Ambassador on July 17, 2009, Disneyland’s 54th birthday. Disney marked the occasion by paying tribute to Marty with the highest Parks and Resorts recognition, dedicating a window in his name on Disneyland’s City Hall.

“Marty was the ultimate Disney Imagineer and Cast Member. From his days working as an intern with Walt to just two weeks ago engaging with fans at D23 Expo, Marty left an indelible mark on Disney Parks around the globe and on all of the guests who make memories every day with us,” said Bob Chapek, Chairman, Walt Disney Parks and Resorts. “He was one of the few people that was fortunate to attend the opening of every single Disney park in the world, from Anaheim in 1955 to Shanghai just last year. We will dearly miss Marty’s passion, skill and imaginative spark that inspired generations of Cast, Crew and Imagineers.”

Bob Weis was one of those Imagineers. “Marty was one of Walt’s most trusted advisors and helped turn his most ambitious dreams into reality. For us, it’s hard to imagine a world without Marty, because Marty is synonymous with Imagineering,” said Weis, President, Walt Disney Imagineering. “His influence can be seen around the world, in every Disney park, and in the creative and imaginative work of almost every professional in the themed entertainment industry.”

Marty’s impact and achievements were recognized with a number of prestigious awards and accolades, including the Lifetime Achievement award from TEA (Themed Entertainment Association), induction into the Hall of Fame of IAAPA (International Association of Amusement Parks and Attractions), and the prestigious Professional Achievement Award from UCLA.

He also authored several books about his experiences and adventures at Disney: Dream It! Do It!: My Half-Century Creating Disney’s Magic Kingdoms (2013), and One Little Spark!: Mickey’s Ten Commandments and The Road to Imagineering (2015).

Disney Historian Jim Korkis, author of the Vault of Walt book series, said, “For decades, when people thought about Imagineers, Marty Sklar was the first name that came to mind. He was the only Imagineer to be involved in the opening of every Disney theme park worldwide. He worked closely with Walt Disney, often writing the words that Walt would say including the script for the famous film where Walt first explained Epcot. The passing of Marty Sklar pretty much brings to a close the team that worked personally with Walt and Roy Disney on creating magic. Marty’s many accomplishments from Space Mountain to Walt’s Epcot film to so much more made him a Disney Legend. He mentored generations of Imagineers and passed along to them the importance of what Walt wanted.”

Marty is survived by his wife of 60 years, Leah; son Howard and his wife, Katriina Koski-Sklar; grandchildren Gabriel and Hannah; daughter Leslie; and grandchildren Rachel and Jacob.

Marty and Leah were two of the founders of the Ryman Program for Young Artists, a project of Ryman Arts, a nonprofit foundation whose purpose is to teach and mentor “traditional” drawing and painting skills to talented young artists in Southern California. In lieu of flowers, the family requests that donations be made in Marty’s name to Ryman Arts at rymanarts.org.

Remember Marty Sklar with these Attractions Magazine articles about his retirement letter to Imagineers and a special dinner with him, and watch our exclusive interview from last year’s D23 Destination D event:

Join us for ‘Early Night Live’ at Hogsmeade