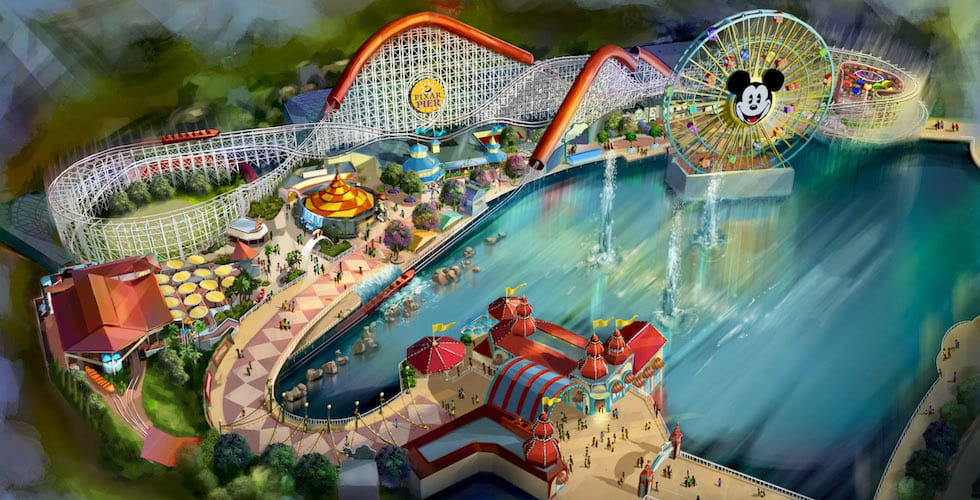 An artist’s rendering of what the newly-themed Pixar Pier will look like upon completion.

The worlds of Pixar will find their new home at Disney California Adventure Park next year, when Pixar Pier opens in summer 2018.

Initially announced at this year’s D23 Expo, this retheming will transform the current Paradise Pier with the new Incredicoaster, four new neighborhoods, as well as new entertainment, themed food and beverage options, and merchandise. This new, permanent land in Disney California Adventure Park will make its debut during Pixar Fest, a special limited-time event that starts on April 13, 2018. 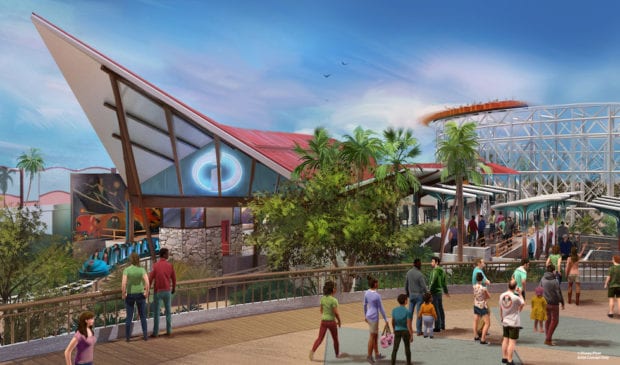 The first of the four themed neighborhoods is inspired by Disney-Pixar’s “The Incredibles,” and will open in summer 2018 with the new Incredicoaster. As a permanent retheme of the current coaster, California Screamin’, the Incredicoaster will take guests through a mid-century-modern-style queue area where they will board ride vehicles with a distinct new look.

The attraction will also have a new musical score connected to that of Disney-Pixar’s “The Incredibles 2,” which will open in theaters on June 14, 2018.

Other neighborhoods include one inspired by Disney-Pixar’s “Toy Story,” that will be developed around the Toy Story Mania attraction; and another inspired by “Inside Out,” which will debut a new family-friendly ride that’s set to open at a later date.

The fourth new neighborhood will host a collection of fan-favorite Pixar stories and characters. Mickey’s Fun Wheel will be themed with a new look, and each of the 24 gondolas will feature a different Pixar character. The face of Mickey Mouse on the wheel will remain unchanged.

At the Games of the Boardwalk, which currently includes the game “Bullseye Stallion Stampede,” guests will be able to enjoy all the midway games as they are rethemed to Pixar characters. New games will include characters from “A Bug’s Life,” “WALL-E” and “La Luna.”

To gear up for these changes, many attractions will close on Jan. 8, 2018, including Mickey’s Fun Wheel, Games of the Boardwalk, Sideshow Shirts and California Screamin’.

Ariel’s Grotto restaurant and the Cove Bar will also be changed into a new Pixar-themed lounge, offering new views of Paradise Bay and the new Pixar Pier. Both locations will also close on Jan. 8, with Cove Bar reopening for a short time in April before its permanent retheme. For guests who wish to make “World of Color” dining reservations after Jan. 7, they should choose either Wine Country Trattoria or Carthay Circle Restaurant. 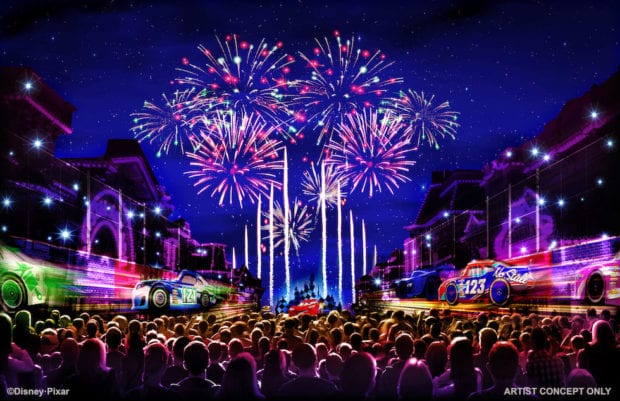 An artist’s rendering of the new fireworks show for Pixar Fest, titled “Together Forever – A Pixar Nighttime Spectacular.”

The opening of Pixar Pier will be a part of all the fun of Pixar Fest, a celebration of friendship that begins next spring. Pixar Fest will include the new foreworks show, “Together Forever – A Pixar Nighttime Spectacular,” as well as the return of “Pixar Play Parade” and “Paint the Night.” Both parades will have new Pixar elements added.

There will also be more Pixar character meet-and-greet opportunities, themed food and beverage options, and merchandise exclusive to Pixar Fest.

Pixar Pier is set to open with the initial Incredibles-themed neighborhood and the Incredicoaster in summer 2018, with a staggered opening of the other three themed areas. For more information on construction and land updates as they are released, stay tuned to our website, Twitter, Facebook and YouTube channel.

Check out our video of the Pixar retheming announcement at this year’s D23 Expo, as well as ride POVs of some of Paradise Pier’s current attractions below:

Take a selfie with Raya from ‘Raya and...

Not a new coaster, contrary to what the article says a few times.