Over 1,000 guests, including government officials, Marvel Studios representatives, fans, media, and even Ant-Man himself, Paul Rudd, gathered at Hong Kong Disneyland for a sneak peek at the highly ant-icipated Marvel-themed attraction, Ant-Man and The Wasp: Nano Battle!

Set to open on Sunday, March 31, this attraction is a one-of-a-kind adventure and is the first attraction to ever feature Ant-Man and The Wasp. Nano Battle is also the first Marvel attraction in a Disney park to feature a female Super Hero as a title character.

In this high-tech ride, guests will fight alongside Ant-Man and The Wasp as they are shrunk down to the size of an ant! Nano Battle features an entirely new Marvel story featuring the first Hong Kong-specific Marvel character, Leslie Lam, as guests join the battle against the evil Arnim Zola and his army of Swarmbots. 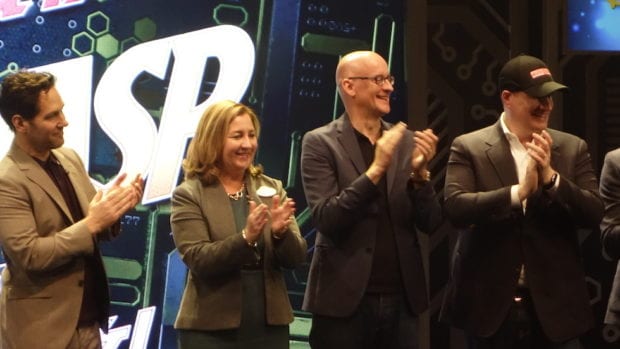 Many were in attendance to the attraction’s Launch Ceremony, including actor Paul Rudd, who plays Ant-Man in the Marvel Cinematic Universe; Kevin Feige, president of Marvel Studios; Peyton Reed, director of “Ant-Man” and “Ant-Man and The Wasp;” Hong Kong actress Jessica Hsuan who plays Leslie Lam, the Chief Engineer of the S.H.I.E.L.D. Science & Technology Pavilion, a new Marvel character created for the attraction; Stephanie Young, managing director of Hong Kong Disneyland; Bob Weis, president of Walt Disney Imagineering; and members of the Hong Kong Government.

“The adventure’s state-of-the-art gaming features are cinematic in scope, production values, and storytelling. What makes the innovative experience even more inviting is the local storyline created just for Hong Kong Disneyland,” said Paul Chan, financial secretary of the Hong Kong SAR Government. “And down the road, I know there will be more Marvel superheroes to marvel over, creating Asia’s ultimate hub of exciting ‘Marvel’ experiences at Hong Kong Disneyland in the years to come.”

The story of the attraction tells of Iron Man calling upon Ant-Man and The Wasp to help protect the S.H.I.E.L.D. Pavilion, because only they have the power to shrink down between the Swarmbots’ armor and destroy them from the inside. But they’re outnumbered, and this is where the guests come in!

Aboard S.H.I.E.L.D.’s newest combat vehicle, D/AGR, aka the “Dagger,” guests will travel to the Data Core and disable Swarmbots along the way using EMP Blasters.

“It’s so exciting to see Ant-Man and The Wasp transition from the screen into an attraction at Hong Kong Disneyland,” said Feige. “With this experience, we have the opportunity to immerse fans in their story in ways that we haven’t been able to do in the films.”

“I grew up going to Disney parks, and now to be part of an attraction at Hong Kong Disneyland is a dream come true,” said Rudd. “I can’t wait to share this experience with my kids – they’re going to love it!”

The attraction also features a new gift shop, Pavilion Gifts, where guests can purchase new merchandise inspired by Ant-Man and The Wasp: Nano Battle! Around 40 new items will be introduced in the shop this month. To celebrate the opening of this new attraction, park admission tickets will also feature a new design celebrating the two heroes.

To learn more about this exciting new attraction, visit HongKongDisneyland.com. Check out our ride-through POV and video of the Launch Ceremony below:

You can also check out these videos on our YouTube channel:

Grand Opening of Ant-Man and The Wasp: Nano Battle! with Paul Rudd at Hong Kong Disneyland