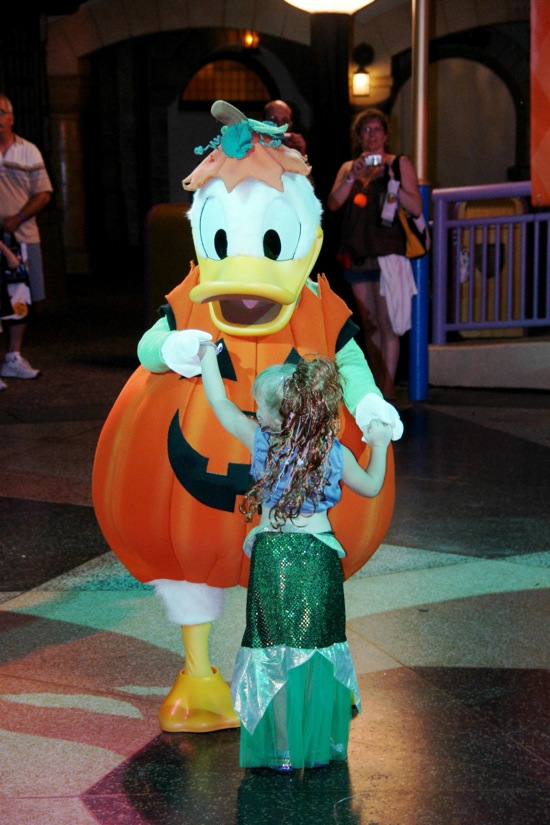 Happy Halloween to all our readers. To help kick off your Halloween, we’ve uploaded a new picture gallery from this year’s Mickey’s Not So Scary Halloween Party, and we present a cute, funny video of kids eating sour candy at SeaWorld’s Halloween Spooktacular.

For those who like the scarier part of Halloween, be sure to check out our pictures and videos from Universal’s Halloween Horror Nights, Busch Garden’s Howl-O-Scream and the recent Zombie Walk in Orlando.

Click Here to see the Mickey’s Not So Scary Halloween Party Photo Gallery.

Click Here to see a video of the Halloween Horror Nights Scare Zones. 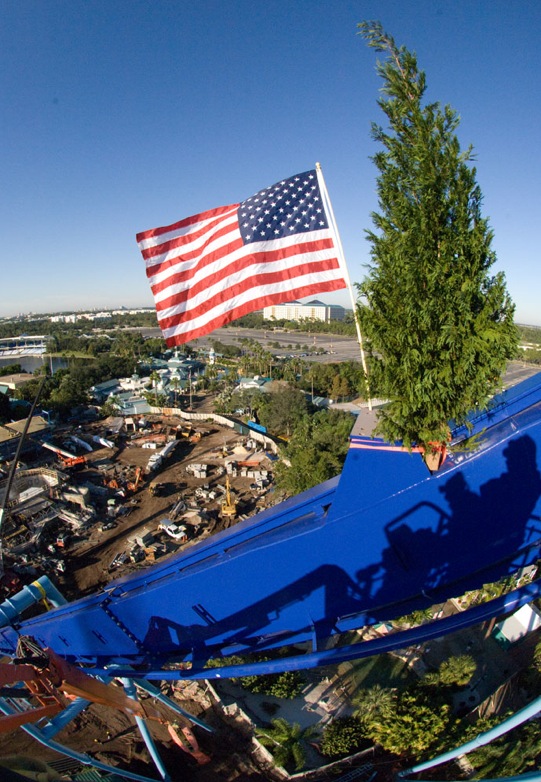 It was a banner day yesterday for SeaWorld’s upcoming flying coaster, Manta. The highest piece of track was hoisted and secured in place. Upon fitting the piece into place 140 feet above ground, a ceremonial evergreen, a symbol of good luck in the high-steel trade, was placed atop the track segment, along with the America flag. After reaching the highest point of the ride, the rest of the construction, quite literally, is all downhill.

Another picture and a video from the construction site is below. END_OF_DOCUMENT_TOKEN_TO_BE_REPLACED

Here’s a short photo update from Disney’s Hollywood Studios taken during my visit this evening. 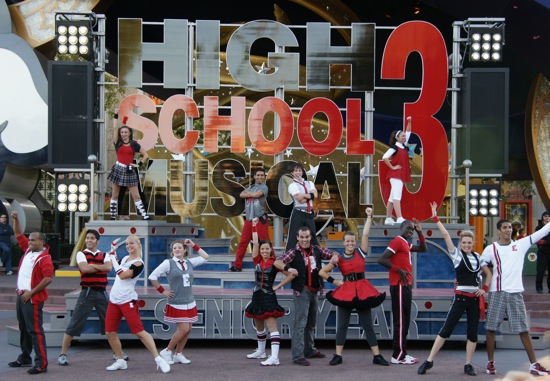 We arrived just in time to see the last performance of the brand new High School Musical 3: Senior Year, Right Here, Right Now! The performance runs the same as the last one, heading down Hollywood Boulevard a few times a day and stopping in front of the sorcerer’s hat for the show. The show itself is completely different but there are still a couple of times when members of the audience (kids and adults) can join in if chosen. END_OF_DOCUMENT_TOKEN_TO_BE_REPLACED

Cypress Gardens has decided to take the “not so scary” approach to Halloween this year by offering a kid friendly Fall Festival this Friday and Saturday. Children 9 and under will receive free admission after 3 p.m. and free ice cream if they come in costume (no masks). Adults will receive admission for $15 after 3 on Friday only.

There will be trick-or-treating on Friday from 4 to 9 p.m. and on Satuday from 4 to 6 p.m. On Friday, Natures Way will be having trick or treating for the animals. This allows the guests to watch the animals be fed pumpkin by the animal handlers. Normally, the animals are fed before or after park hours. The times for this are 11:30 a.m. (Jaguar and Wallabies) and 3:30 p.m. (Goats, Lemurs and Tortoises).

For those a bit daring, venture out on the Magnolia Mansion and Plantation Gardens Haunted Tour or visit the “Boo House” in Jubilee Junction.

Live entertainment is also on the agenda. Catch street performances in Jubilee Junction at various times on both days. In “Bad Bob the Bone Butcher,” Bad Bob the Bone Butcher comes back from the grave and it’s the deputy’s bones that the Butcher Man craves! Don’t miss the hilarious Halloween high-jinks at “ShenaniGuns! Comedy Wild West Show!” The silly scalawags of Cypress Cove get a slapstick scare when the hidden treasure they seek turns out to be haunted in “The Haunted Treasure of Cypress Cove”! 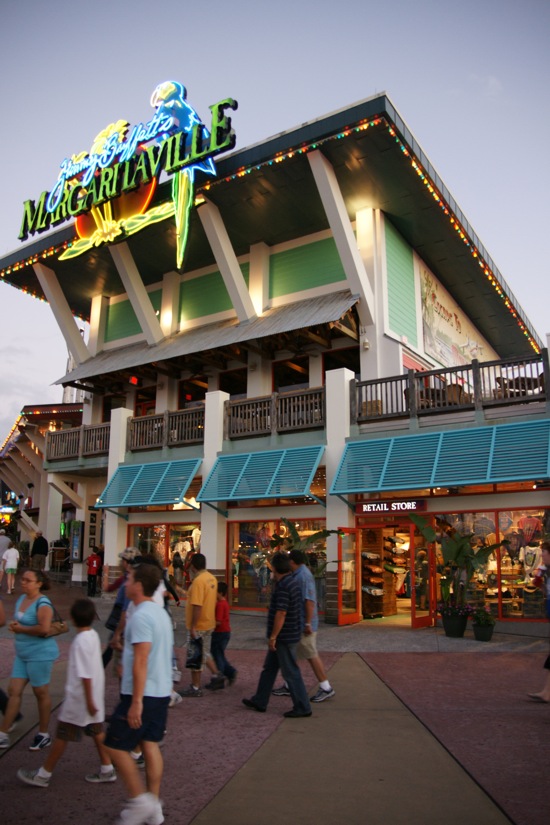 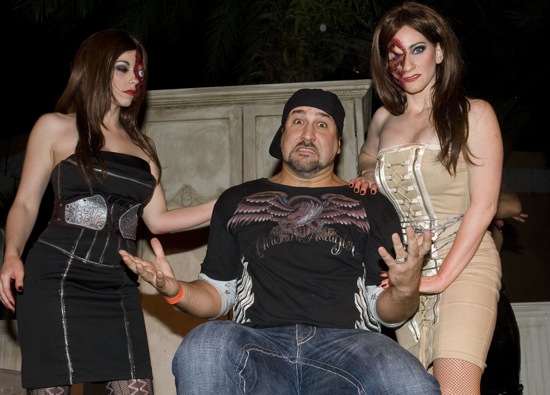 Best known as a member of ‘N Sync, a competitor on Dancing with the Stars and as the host of The Singing Bee and Celebrity Circus, Fatone found some new fans in Howl-O-Scream’s famous Naughty Nurses and the rest of the Fiends cast.

He was also sought out by the Raven Twins, Lara and Lana, as their next victim. Fortunately, the Twins spared Fatone the horrible fate most of their dates meet and let him go to enjoy an evening of haunted houses and world-class roller coasters in the dark. 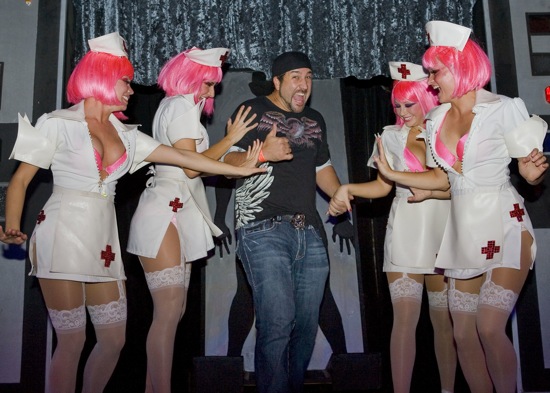 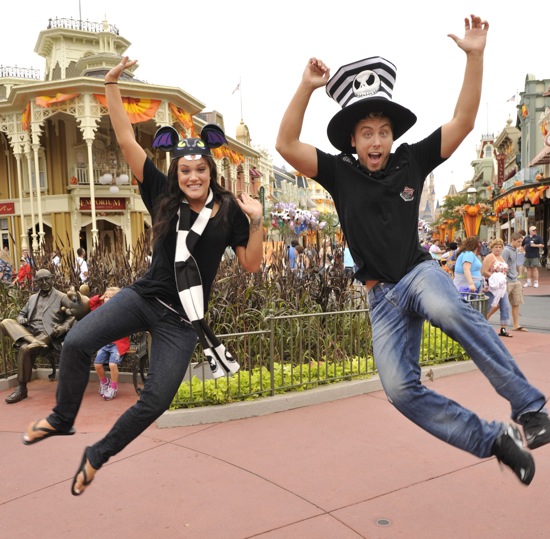 Singer and actor Lance Bass and his “Dancing with the Stars” professional dance partner Lacey Schwimmer got into the Halloween spirit and kicked up their heels yesterday in the Magic Kingdom. The pair is one of seven couples remaining on the current season of the popular ABC-TV dance competition show.

The entry fee for competitors is $50 and includes free parking in the main parking lot, entry to Cypress Gardens, a T-shirt and a cook-out following the competition. If you think you have what it takes to stay upright, skiers may register beginning at 7 a.m. at the Cypress Gardens main entrance. An awards ceremony will be held directly following the last ski show of the day. All USA Water Ski members must bring their membership cards. Depending on entries received, the competition could be extended to Sunday, Oct 26, to finish final rounds.

Small town southern boy Billy Currington will be performing his list of country hits at Cypress Gardens tomorrow starting at 7:30 p.m. The concert is included with park admission.

Currington’s southern country sound has been described as “blues tinged” and “soulful.” Although Currington started writing songs and playing the guitar as a teenager, his debut CD didn’t hit the shelves until 2003. His second album, “Doin’ Somethin’ Right” achieved the number two spot on the Billboard’s Current Country Albums Chart after being release in 2005. “Walk a Little Straighter,” “I Got a Feelin’,” “Party for Two,” and “Must Be Doin’ Somethin’ Right,” are some of his hits. In 2006 “Must Be Doin’ Somethin’ Right” won the “Hottest Video of the Year” award from the fan-voted, CMT Music Awards. He is slated to release a new album this Fall.

A huge accomplishment for Currington was being chosen to record “Party of Two” with country star Shania Twain. Other bragging rights include being named one of the 20 Sexiest Southern Men by CMT, one of Nashville’s “25 Most Beautiful People” by Nashville Lifestyles’ magazine (which he has also graced the cover of), an “On the Verge” artist by USA Today and has also appeared in People’s “Sexiest Man Issue.”

Guests are invited to bring their lawn chairs or enjoy complimentary bench seating. Reserved seating is also available for $10, $15 and $25 but does not include park admission, which must be purchased separately. Guests can order both reserved seats and park admission online by visiting www.cypressgardens.com or by calling 863- 324-2111, option 2. 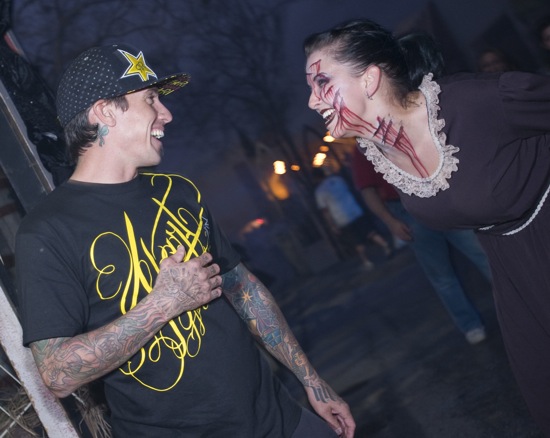 Motocross champion and co-owner of Hart & Huntington tattoo shops Carey Hart tries to talk his way out of a creepy encounter with a scareactor at Halloween Horror Nights 18 during a visit to Universal Orlando Resort on Oct. 18.