This last month has been jam-packed with Disney dining news and events! We’ve got all the Festival and Holiday news, as well as special finds in the parks! 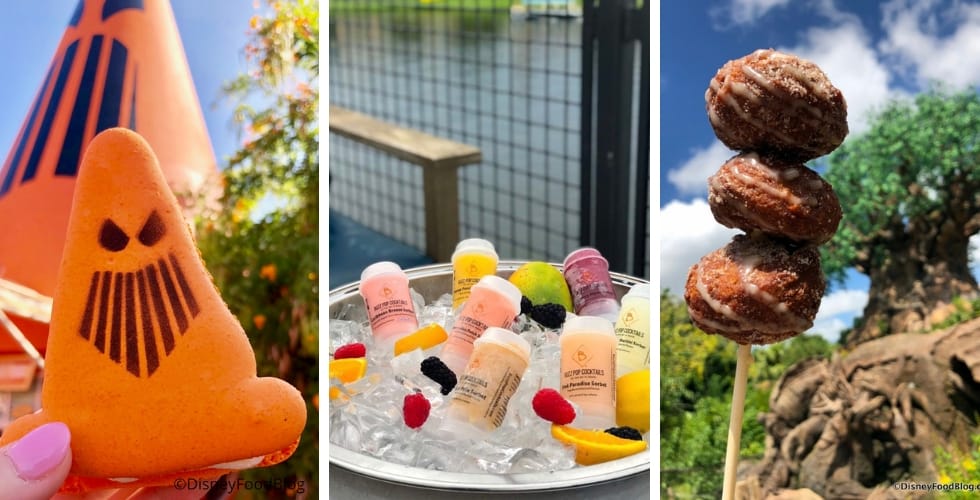 Check out all the latest updates in the world of Disney eats and treats, courtesy of The Disney Food Blog.

Snacks, drinks, and restaurants saw price increases at both Walt Disney World and Disneyland at the beginning of October.

The increase was seen at both counter-service and table-service locations. Some of the changes were subtle, like the All-American Burger with fries going from $12.49 to $12.99 at Epcot’s American Adventure Pavilion’s Liberty Inn counter-service.

For the first time ever, we even saw price increases at some of the Epcot International Food & Wine Festival booths – in the middle of the festival!

The Epcot International Food & Wine Festival is in its last month already! Be sure to visit the festival before it closes on Nov. 12.

In addition to some price increases, we also saw the Light Lab and Earth Eats change up their menus. The Earth Eats change is a return to their originally-announced offering of Kombucha as a beverage choice. When the Festival opened, they were offering Suja cold-pressed juices instead.

The 2018 Swan and Dolphin Food and Wine Classic will take place Oct. 26-27. This year, it features more than 90 food and beverage stations, with dishes from the two resorts’ 17 restaurants and lounges, as well as over 30 wineries and four special food areas – Carnival Corner, Beer Garden, Chinatown, and new for 2018, The Pig & Poke – along with Educational Seminars. 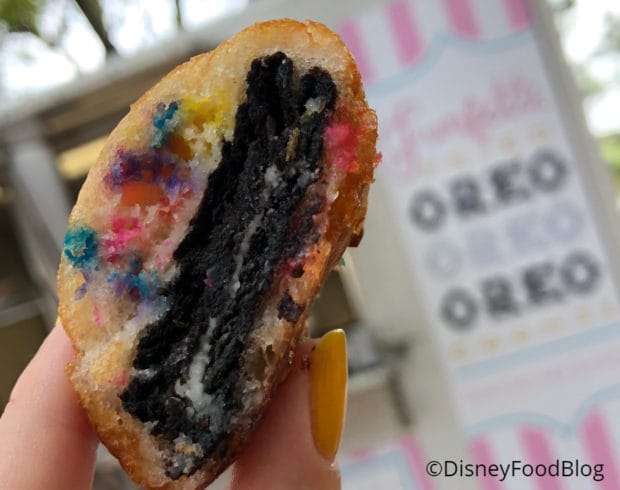 There’s a lot to learn (and taste) here, so if you’re new to wine or want to learn more, this is a way to gain lots of knowledge in a fun way!

Halloween celebrations are in full swing at Walt Disney World and Disneyland.

We’ve been seeing some popular items from Disneyland travel across the country and land at Walt Disney World, much to our delight! 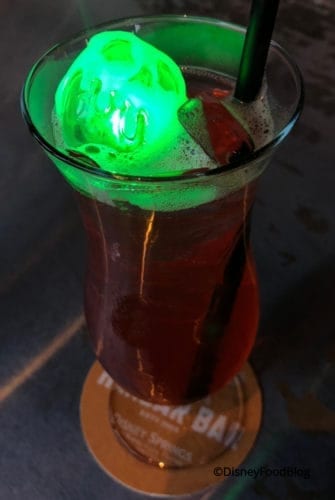 Jock Lindsey’s Hangar Bar is serving up specialty Halloween cocktails with the Poison Apple Glow Cube, and Disney’s Animal Kingdom is home to the Pumpkin Tire Straws that are originally from Disney California Adventure’s Cars Land.

Are you a “Nightmare Before Christmas” fan without any plans on Halloween? You’ve got to check out the Halloween Soirée at The Edison in Disney Springs! The event will celebrate the 25th anniversary of Tim Burton’s “The Nightmare Before Christmas” and is inviting guests to dress the part in festive attire. A Halloween Soirée at The Edison will take place on Wednesday, Oct. 31st with doors opening at 7:30 PM. Tickets can be purchased online. 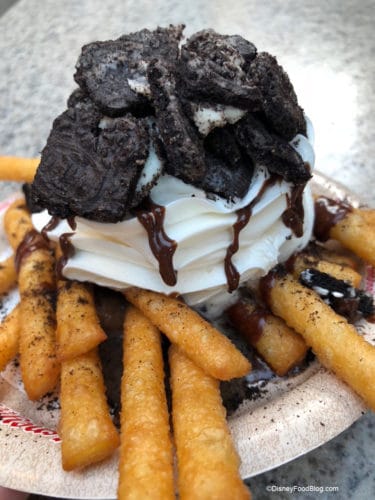 Thanksgiving in the Parks

Disneyland is the place to be this Thanksgiving! Be sure to stop by Café Orleans for a Thanksgiving meal Café Orleans-style. They’re putting a twist on their classic Monte Cristo and will make it with turkey and cheese, served with cranberry sauce and home-style gravy. A Kids’ Turkey Monte Cristo and, of course, Pumpkin Pie, will also be among the offerings.

Once again this year, a Thanksgiving Feast will be served at Disneyland Hotel on Thursday, Nov. 22! Booking is now open for Thanksgiving Day from 11:30 a.m. – 6:00 p.m. The Disneyland Hotel’s Grand Ballroom will serve up an all-you-care-to-enjoy buffet surrounded by autumn decor, and a few Disney pals will stop by for photo opportunities.

We’ve been keeping up on any news on Events, Openings and Refurbishments for you – and the list is long!

Get ready to meet Snow White, Dopey, Grumpy, and The Evil Queen at Artist Point in Disney’s Wilderness Lodge for Storybook Dining! This new dining experience will make its debut on Dec. 16, and advance dining reservations are now open. 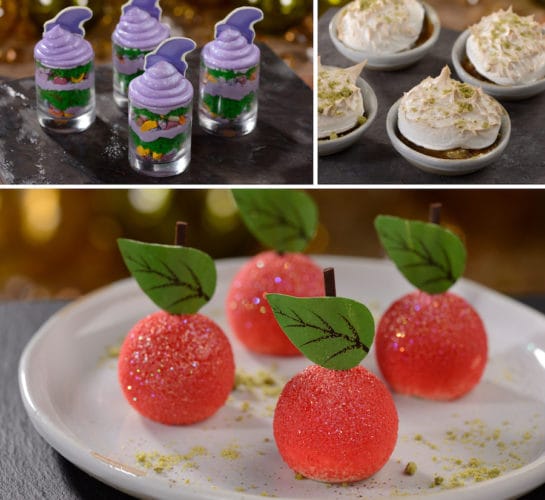 Guests will “enter an enchanted forest” at the reimagined restaurant, and a photo opportunity will be available with The Evil Queen herself. Snow White, Grumpy, and Dopey will visit tables in a similar fashion to other character meals.

There are more options for table service breakfast in Magic Kingdom. Starting Nov. 4 and running through Jan. 5, The Plaza Restaurant is offering breakfast from 8:00-10:30 a.m. daily. Advance dining reservations for it are open now. The full menu has not been released, but we do know there will be a Classic All-American Breakfast (with mini Mickey Waffles), Lobster Benedict, Omelets, and fun kids’ options.

There is nothing more British than a cup of tea, and now you can have a cuppa at Epcot’s local pub, The Rose and Crown! But this isn’t your regular tea time – it’s an “experience”! The Rose and Crown has launched a new Tea Experience, where you’ll not only sip tea, but you’ll munch on scones and sandwiches while learning about tea from a Twinings-trained cast member.

Disney’s Caribbean Beach Resort has been undergoing a resort-wide “re-imagining,” which included a complete makeover of the resort’s dining locations. 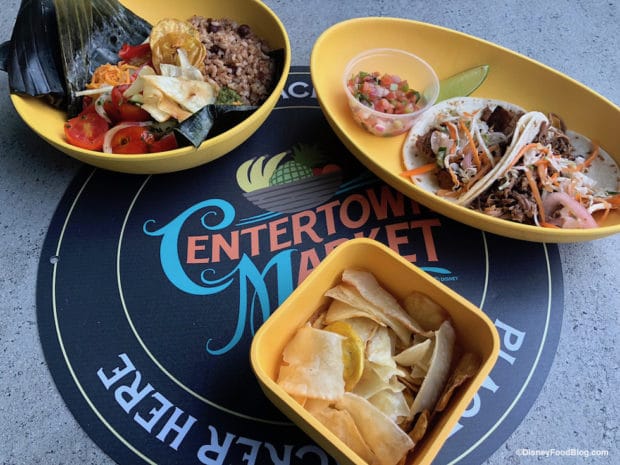 Some food options at Centertown Market.

All three new locations opened in October and we were there to take in the vibe and try the new eats. 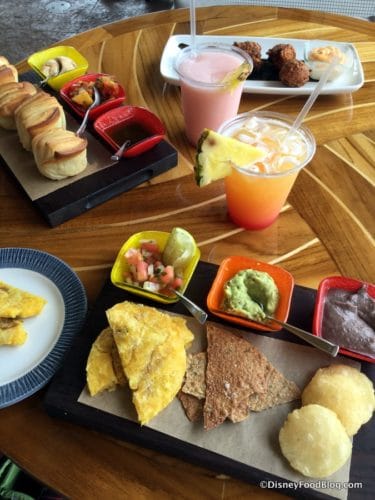 Some food and drink offerings from Banana Cabana!

The Downtown Disney District is seeing a lot of changes and activity! If you missed your Montague it’s time to celebrate, because Earl of Sandwich is back in Disneyland for a limited time! No timeline was given for how long it will be open, so be sure to get there soon to grab your favorite sandwich!

Downtown Disney‘s food trucks will be sticking around a while longer! They begin serving each afternoon at 3 p.m. and will continue to visit on a rotating basis, so be sure to try them all! The visiting food trucks include The Habit Burger Grill, Crepes Bonaparte, Brew Wings, Afters Ice Cream, and Mad Dumplings. If you’re looking for some entertainment while you nosh on food truck eats, live music will be performed nightly beginning at 6 p.m. on the main stage in the west end of the Downtown Disney District.

Ballast Point is slated to open in late 2018. Based in San Diego, Ballast Point is one of the leading craft breweries in the country. The Downtown Disney location will house a three-barrel “research and development” brewery in addition to a New American restaurant and outdoor beer garden.

A la carte options for lunch and dinner at Disney’s Grand Californian Hotel & Spa’s Storytellers Café will no longer be available, making room for a buffet brunch and buffet dinner instead.

Storytellers Cafe is home to the new Mickey’s Tales of Adventure Breakfast Buffet. Guests visiting for lunch can enjoy Mickey’s Tales of Adventure Brunch Buffet with visiting characters! The breakfast and brunch buffet will be served from 7:00 a.m. until 2:00 p.m. each day. The dinner buffet will be served from 4:30 p.m. – 11:00 p.m. Characters are not part of the dinner buffet.

While out and about we always find some hidden and not-so-hidden gems. Here’s a sampling of some of our finds.

“What’s This?,” as our good friend Jack Skellington asks! We asked the same thing at the Spring Roll Cart in Magic Kingdom’s Adventureland! 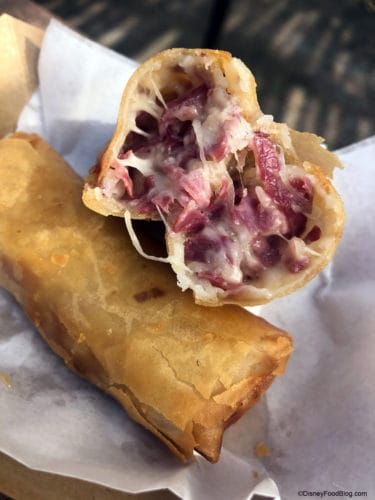 This cart already serves the cult favorite Cheeseburger Spring Roll along with a traditional Vegetable Spring Roll, but now they have upped their game with a Reuben Spring Roll!

It was just an ordinary day in the Magic Kingdom until we neared the Haunted Mansion and could smell bacon! 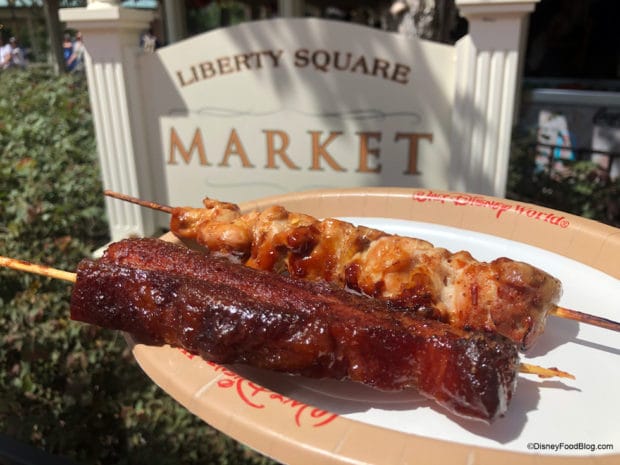 We followed our noses to Liberty Square Market and made a discovery: Candied Bacon and Chicken Skewers! We had to try these out! 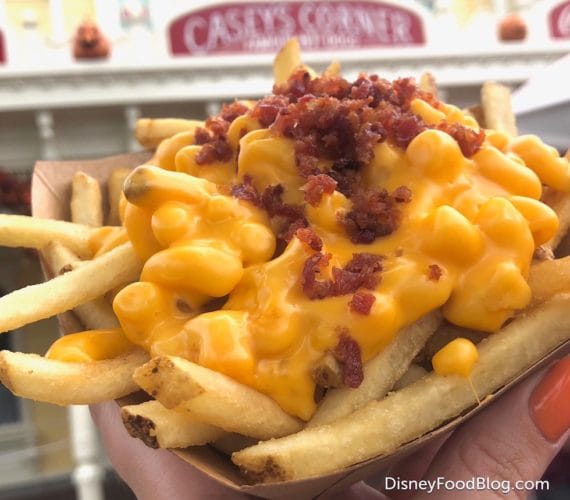 Those famous Casey’s French fries have gotten a couple of makeovers on the new Casey’s Corner menu. First up, they’ve been doused with that electric orange mac and cheese that’s used on the mac and cheese dog, and then dusted with bacon bits to boot.

But it doesn’t stop there: Casey’s has also created Loaded Fries, which means they put the toppings from the Dog of the Month on a pile-o-fries – which for October is a Mashed Potato Hot Dog. Sign us up!

Karamell-Küche in Epcot’s Germany Pavilion is celebrating fall with some new Caramel Squares! 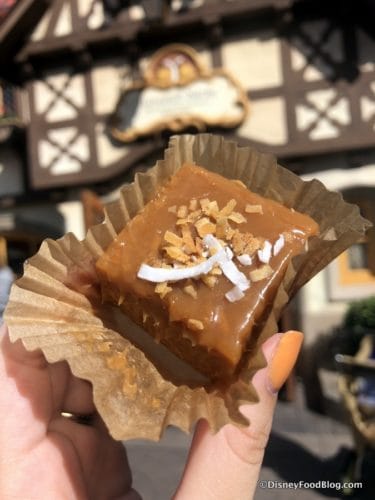 The two new squares we found are Coconut Caramel and Caramel Macchiato.

Because the fall-snacking obsession continues to grow with all things pumpkin, caramel, and even maple bacon around Walt Disney World, we decided to dig into the Apple Cider Donut Holes at Isle of Java! 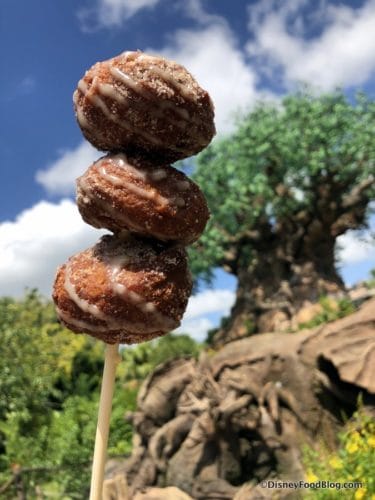 The fried donut holes are rolled in cinnamon sugar and drizzled with an apple cider glaze – sounds like autumn on a stick!

Like we said, we’re in the middle of a fall-snacking obsession, and Disney Springs is the place to go! We’ve found:

When you’re at Disney Springs looking for a good spot for drinks with a great view, Paddlefish is always a great choice. Now there’s a new, fun adult beverage on the menu: Buzz Pop Cocktails! 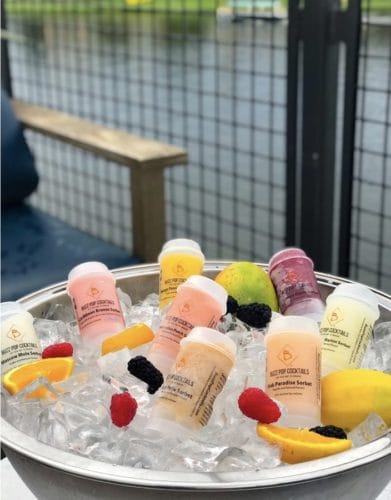 These are fat-free, gluten-free, vegan, and only 100 calories. They can be enjoyed as a frozen dessert, or you can let it melt and drink it!

Fish and chips are a staple dish at Disney Springs’ Raglan Road Irish Pub and Restaurant and Cookes of Dublin (the counter-service spot that’s Raglan-adjacent). If you’ve visited the shopping district with food allergies, you’ve had to skip this dish – but now, there’s a fish and chips for you! Gluten-free and dairy-free Fish and Chips (with bonus Onion Rings) are now available at both of these locations.

Disney’s Wilderness Lodge has upped the game with themed cupcakes! It’s worth the stop to check out the Oktoberfest Cupcake! 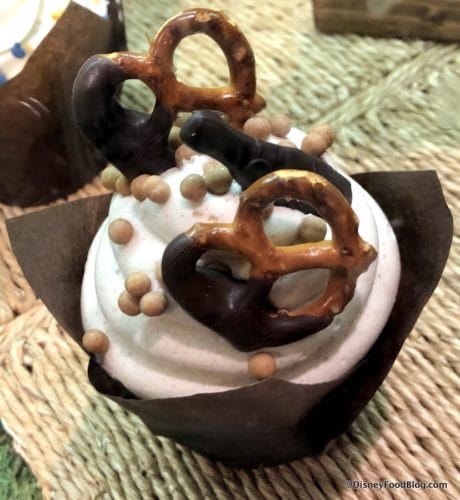 This chocolate cupcake is complete with Guinness ganache and topped with cinnamon frosting, then garnished with chocolate-dipped pretzels and candy pearls for a sweet-and-salty treat.

Mickey Mouse is the center of attention for his 90th birthday year. Everything seems to be taking the form of the mouse these days! Over at Pop Century’s Everything Pop, we spotted him as a whoopie pie!

Tambu Lounge at the Polynesian closed for refurbishment, and two temporary lounges have been set up in the meantime.

We’ve spotted a new addition to one of the temporary lounges: a Kona Beer Flight! The flight includes three 5-ounce samplings, and guests get to choose their beers from five Kona Brewing Co. offerings. It’s great to know that even with their temporary lounge locations, the Poly is keeping it fresh and providing fun options for guests.

Our favorite dessert item at the clam bake at Cape May Cafe in Disney’s Beach Club Resort were the Oreo Bon Bons. Sadly, they were removed from the menu several years ago, and while they could often be found in packaged at the Beach Club Marketplace, it just wasn’t the same. 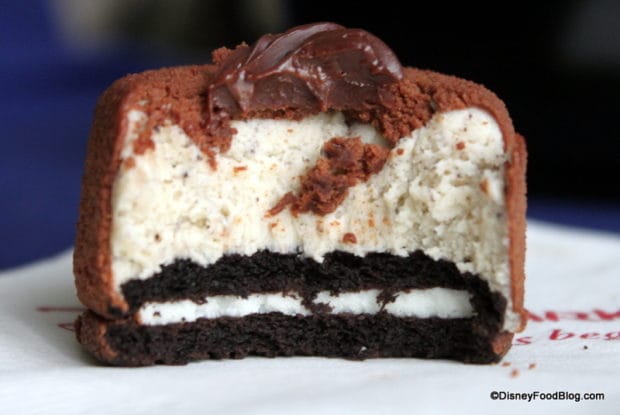 But today, we have good news for all you Oreo Bon Bon fans! Word on the street is the Oreo Bon Bons have returned to the dessert table at Cape May Cafe!

Frozen Pizzas are out at Port Orleans: French Quarter and Saratoga Springs; we caught some chefs in the act of making fresh dough on premises. 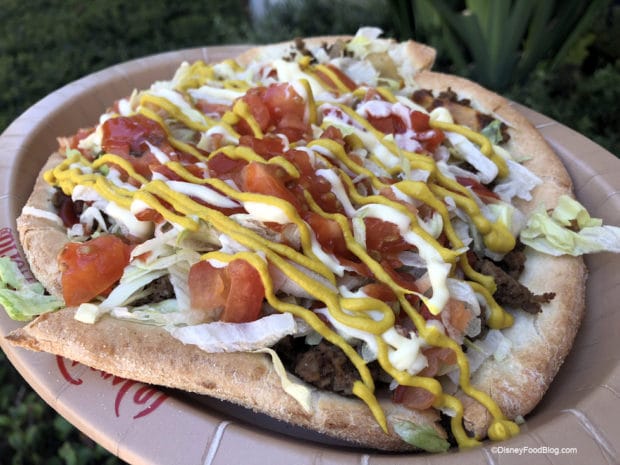 After seeing this, we had to try one of these new pizzas and opted for the Cheeseburger Thin-Crust Pie.

This is just a small portion of all that we covered in the last month on Disney Food Blog. We also covered new locations on the Mobile Order System, the elimination of straws and plastic bags, a healthy snack at the Yacht and Beach Club pool, and autumn themed cupcakes. Plus we reviewed Nomad Lounge, Wine Bar George, and the Rivers of Light Dessert Party!

Be sure to check out Disney Food Blog to keep up with the latest Disney dining and food news, as well as reviews!