Lace up your jogging shoes and hide your bananas, because the mischievous Minions are warming up for the first-ever Running Universal 5k race at Universal Studios Hollywood on May 11-12, 2019. 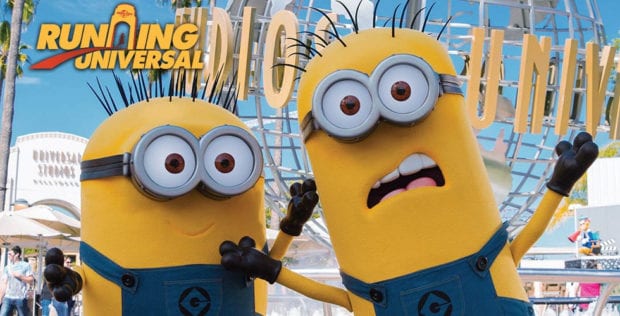 Registration is now open for the first Running Universal 5k race featuring the Minions at Universal Studios Hollywood on May 11-12, 2019.

UPDATE – 03/13/19: Due to registration selling out for Saturday, May 11, Universal Studios Hollywood has added on a second day to their first-ever 5K run! Walkers and runners will be able to participate on Sunday, May 12.

Register now, as spots are limited and the race will likely sell out again.

The inaugural Minion Run, featuring Illumination’s Minions from the Despicable Me Minion Mayhem ride, invites participants ages five and older (of all experience levels) to wind their way around Universal Studios Hollywood and through parts of Universal Studios’ historic backlot, giving them an insider’s view of the “Entertainment Capital of L.A.”

Starting at Universal Studios Hollywood’s front gates, participants will pass through some of the theme park’s areas and attractions before winding their way along the backlot as they head toward the finish line at CityWalk’s 5 Towers outdoor concert stage. Along the 3.1 mile course, participants will be entertained by Universal Studios Hollywood characters including the Minions.

The program will begin at 6 a.m. and culminate at 7:30 a.m. with an awards and closing ceremony, featuring live music, food and post-race swag. Registration is now open and space is limited.

VIP registration costs $135 and includes all of the above, plus exclusive VIP check-in, complimentary valet parking, post-race VIP breakfast at Universal CityWalk, Running Universal reusable water bottle, and a 1-on-1 meet and greet with Illumination’s Minions.

Non-running fans can attend for $45, and get a Minion cap, Minion drawstring backpack, guaranteed access to fan zone at the finish line, and complimentary beverages and refreshments at the finish line. CityWalk guests will also be able to view the finish line for free. Registration discounts are available for pass holders and team members.

For more information and to register, visit RunningUniversal.com, and watch these videos of other theme park running events.