Harry Potter is easily one of the largest worldwide fandoms to exist. Since the inception of the series, books, artwork, films and parks have sprung up. Universal Orlando aims to continue its hold as the epicenter of magic with a major new roller coaster coming next year. This photo report, with shots provided by our contributor, @bioreconstruct on Twitter, oversees the current construction going on at the Wizarding World. 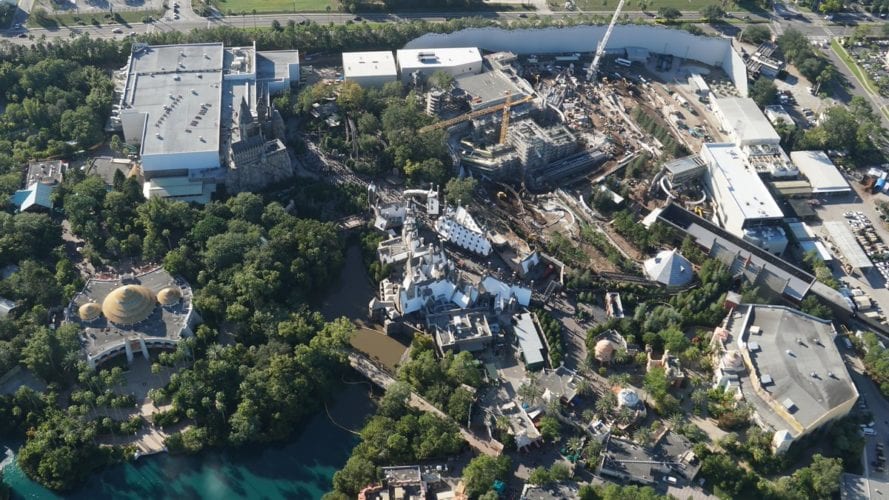 This overview of the entirety of the Hogsmeade area at Universal’s Islands of Adventure helps put the scale of this coaster into perspective. On the top left we can see the Hogwarts castle, and it respective show building, which houses Harry Potter and the Forbidden Journey. With literal side-by-side comparisons, it is easy to see that this upcoming coaster will be more than double the size of the current largest attraction in Hogsmeade. 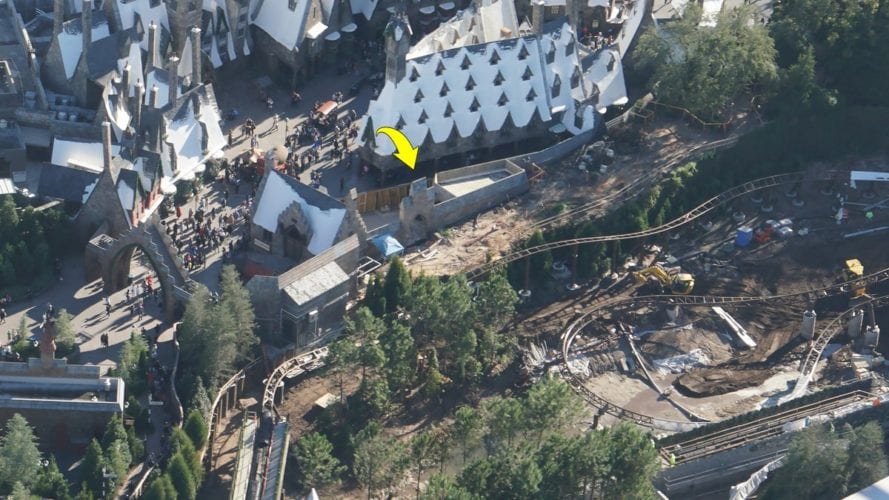 Starting at the entrance to the attraction, we can see that the path has been entirely demolished. With the scale of this attraction, it is safe to guess that the queue will need to be reworked to have a higher capacity. 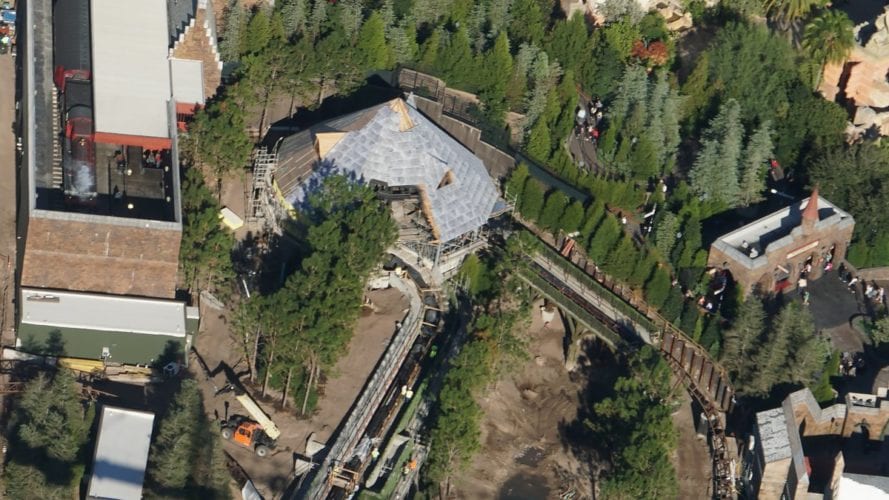 Following the track, we are lead to what we believe to be Hagrid’s Hut. Some small bits of theming are seen on the supports near the hut. But, the most important theming element is the trees. The introduction of trees and small theming elements is a critical milestone of theme park construction. I also wrote about this on the most recent Star Wars: Galaxy’s Edge construction article. 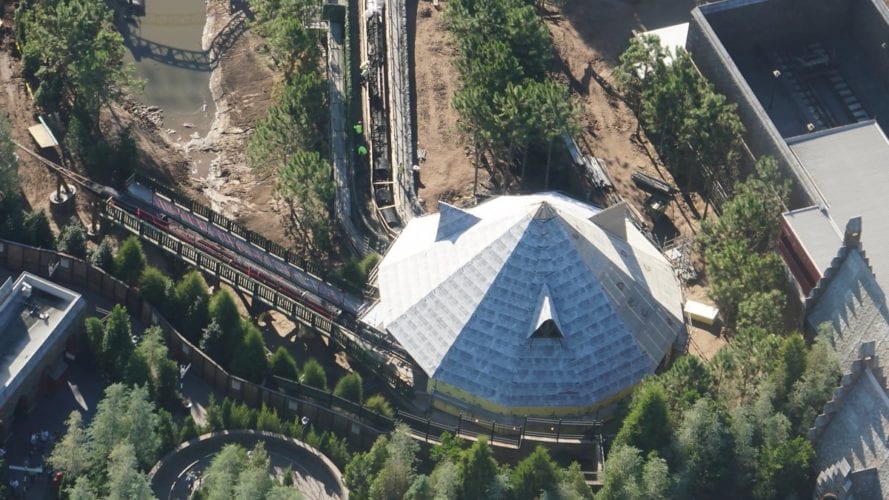 Trees alone might not be a huge part of the storytelling aspect of an attraction, but they are annoying. Annoying for construction work that is. Large cranes and trucks would have to be extra careful not to hit theming elements or trees that are near construction roadways. The more trees we see, the more sure we can be that the major work is done in that area. 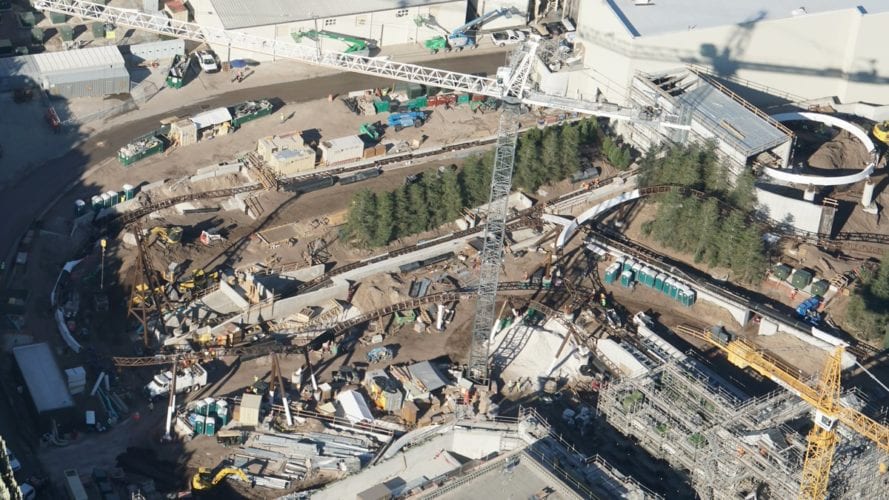 If we look near the dead end section of track we see more trees. No much theming has come to this section; but, with a large crane nearby, it is likely that this section has been put on the back burner until other areas were farther along. 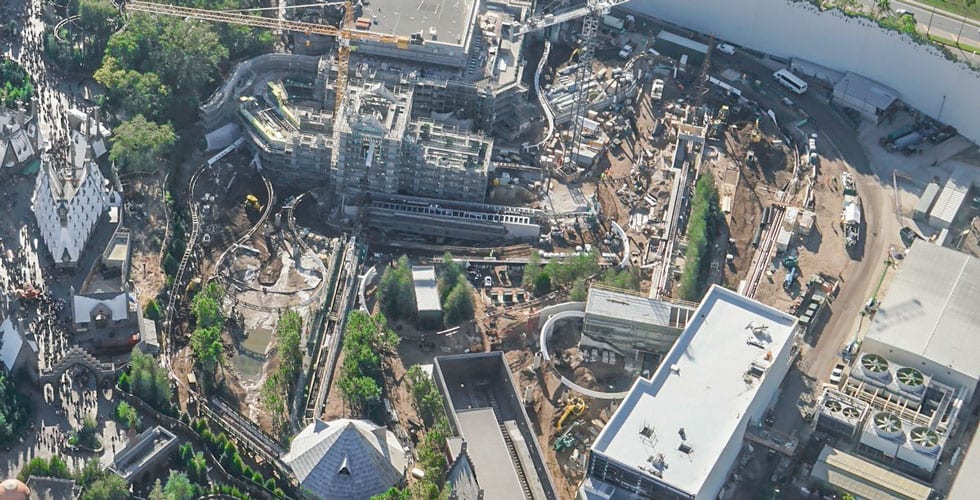 Currently we cannot see much of the progress at the drop track/elevator building on the bottom right. But, a nearly finalized roof and exterior walls could mean that detailed interior work may begin soon. The building extension over the 270º turn towards the dead end track appears to be nearly finished with its roof as well. In the center of the construction, we can see the unknown structure which was featured in the coaster’s poster. 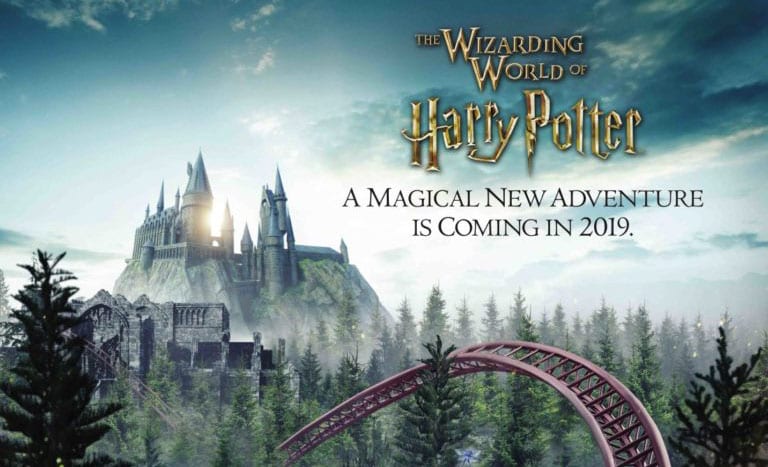 We can see this same structure in the concept art as a decaying ruin. The concept art also shows a full and thriving forest. While concept art can’t always be taken as a picture perfect look, it is expected that many more trees should fill the empty areas around the coaster track. 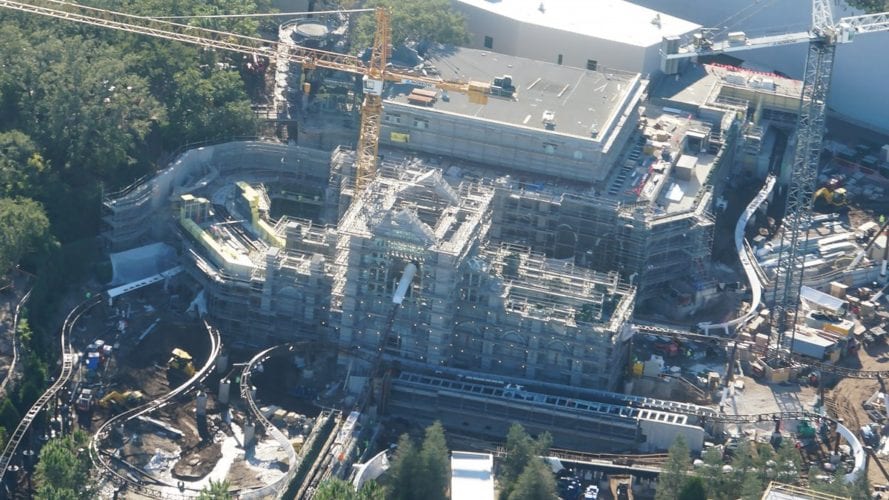 This ruin is still under major construction, so it will probably be a few more months before we can fully appreciate the exterior. You can take a close up look at some of the detail work before the scaffolding went up, here. Whatever this structure will be, it certainly shall be big and beautiful. It will almost be sad to see the craftsmanship purposely altered to fit the ruins storyline. But, time will tell on the true fate of this mysterious structure. 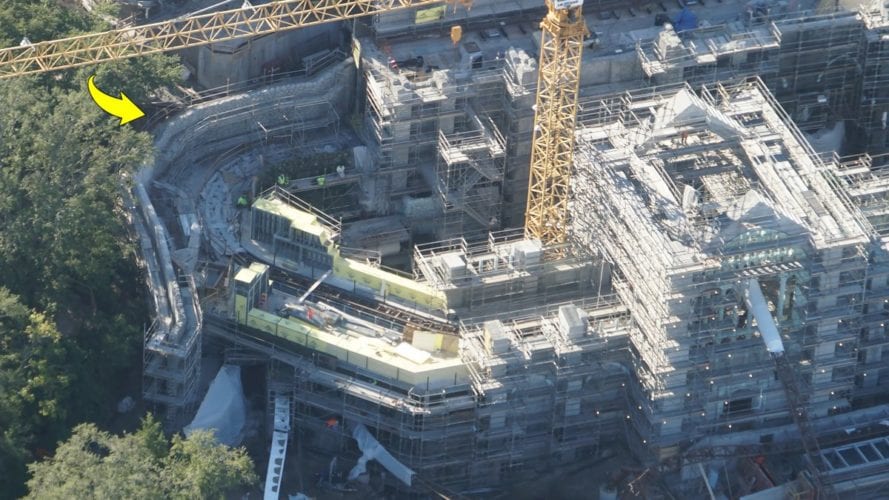 Behind the structure we can see new rock theming being worked on. This stacked rock pattern appears on both sides of the main show building as well as near some launch points on the track. These views are the first true ruins theming we can see. 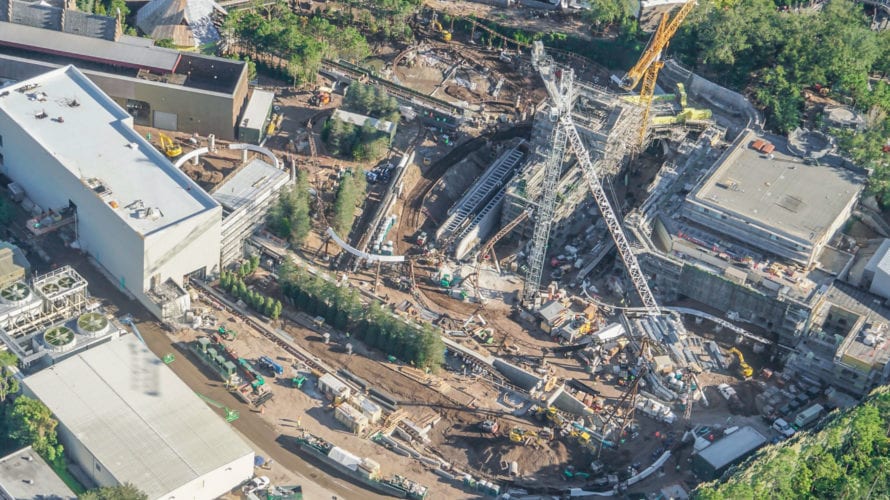 On the right side of the photo, you can see another section of stacked rock theming up against the main show building. In the dead-center, the lower track near the mysterious large ruin structure appears to be getting specific covering to hide the area around the track. This seems to be happening wherever there are brakes or launch points. While this is probably done just to hide the mechanics and keep the story alive, it will be interesting to see if other show elements will be added to these sections as well.

Zooming in on the area near Hagrid’s Hut, we can see that the track bridges over a gap that clearly contains water. This may be residual water from construction work or a storm, but it could also be a clue into the coaster’s theming. The trees that have been placed thus far seem to be isolated into very specific areas. This could mean that large areas of water may be under and around the track. This would cut down on areas that needed trees and add a unique fly-by element to the ride. It would also help hide the support beams that are holding up the track.

We’re not sure, Universal hasn’t officially announced an opening date or season for this attraction. We’ll report it as soon as they do.