Busch Gardens Williamsburg is commemorating a decade of holiday celebrations with its most festive Christmas Town to date this holiday season.

END_OF_DOCUMENT_TOKEN_TO_BE_REPLACED

Starting on Monday, guests can keep the holidays going with the all-new Three Kings Celebration at SeaWorld Orlando, running from Jan. 1-6. END_OF_DOCUMENT_TOKEN_TO_BE_REPLACED

This holiday season brings more reasons than every before to join the fun of SeaWorld’s Christmas Celebration. END_OF_DOCUMENT_TOKEN_TO_BE_REPLACED

Busch Gardens Williamsburg’s annual Christmas celebration starts on Nov. 24, and will run select days through Jan. 1, 2018. This year’s event will bring with it a roomier home for Santa, an all-new show called “Gift of Harmony,” and new culinary offerings. END_OF_DOCUMENT_TOKEN_TO_BE_REPLACED

The parade follows the lighting of over 350,000 colorful LED lights on the 5-Story Special Effects Christmas Tree on the Square, centerpiece of the Christmas on Main Street light and sound shows which begin at dusk each evening. The tree blazes to the movements of Christmas songs — up to 100 light changes per second — while lights around the Square flash along, accompanied by surround-sound. 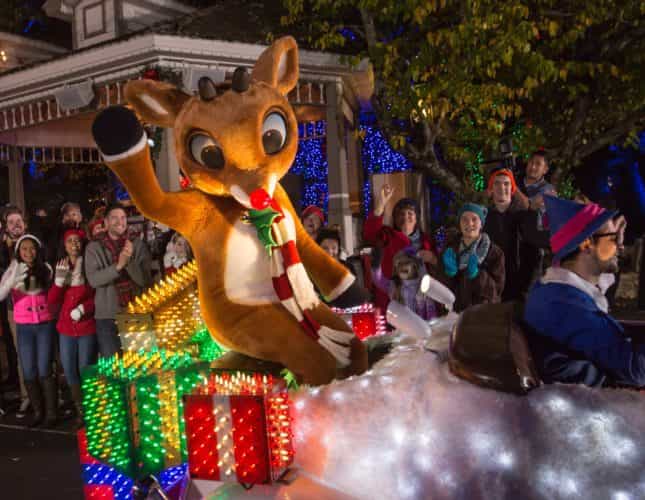 The festival also features two musical productions, It’s a Wonderful Life and A Dickens’ Christmas Carol. It’s a Wonderful Life presents a musical interpretation of the classic film and features special effects and a cast of 14 singers/actors. A Dickens’ Christmas Carol, also an original musical adaptation of a famous classic story, includes elaborate sets, flying spirits, pyrotechnic special effects and a cast of 15, accompanied by a live band.