Disney shared the first TV spot for the upcoming live-action remake of “Aladdin” during the Grammys on Feb. 10 – and with it came our first look at a very blue Will Smith as the Genie. 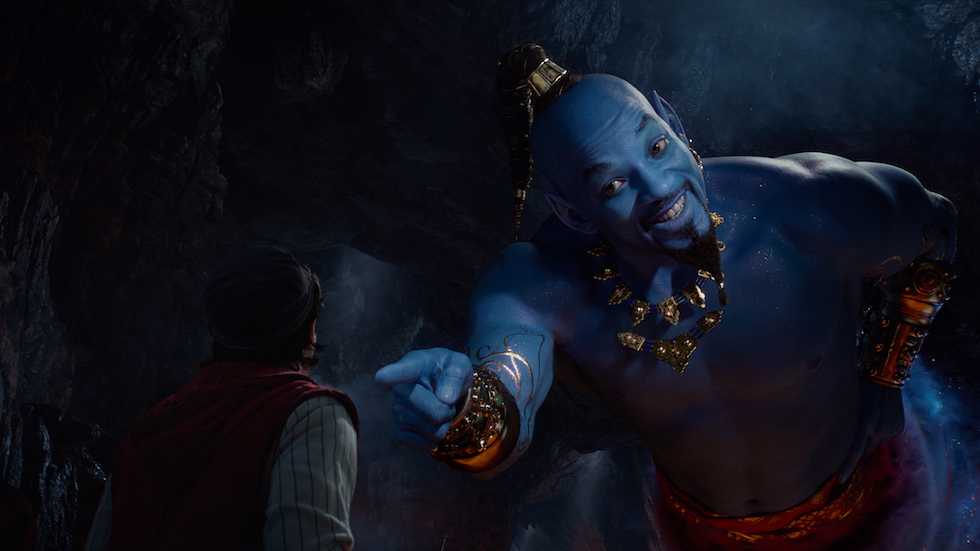 In the first TV spot for the “Aladdin” remake, fans got their first look at Will Smith all in blue as the Genie.

“Aladdin” is just one of many new Disney live-action retellings set to hit theaters and Disney+ over the next few years, joining the likes of “The Lion King,” “Dumbo,” “Mulan,” and “Lady and the Tramp.”

Fans immediately took to social media to share their opinions on the big blue guy’s new appearance, and trust us, there were A LOT of opinions… and also a lot of memes.

Also look at this.
Aladdin 2019 in a nutshell https://t.co/fOdBdMN8Aa

I y'all think you're getting out of this whole thing without hearing a rendition of GETTIN' GENIE WIT IT then you haven't been paying enough attention to Will Smith's career choices. pic.twitter.com/73r5qCWn8H

Some fans loved the new live-action look for the wish-granting lamp-dweller:

Can't wait for the Movie

Love it! Whimsical look and a wonderful actor! Instant smile for me. 🙂

I think this pic looks a lot better than the tiny bit of footage in the TV spot. #Aladdin pic.twitter.com/y2I0tKaxLx

I don’t care what you say, THIS LOOKS BADASS! #Aladdin pic.twitter.com/WsnxKg6JHz

Looks a-maz-ing! Can’t wait to see it in movies 🧞‍♂️🧞‍♂️ Will Smith is a great casting for Genie

Others thought this new take on the Genie was pure nightmare fuel:

PuT ThaT ThIng BaCk wHeRe It CaMe frOm Or sO HelP MEEE@Disney #AladdinTrailer #Aladdin pic.twitter.com/SYEIwKEEHc

Will Smith genie is what appears in my room when I have sleep paralysis pic.twitter.com/NzMDOgvkkz

Genie is gonna get jiggy with my nightmares pic.twitter.com/CR6xNTv2CD

And some just wanted to see better special effects and character design:

This is going to sound odd, but I don’t think that’s Will Smith’s torso. It’s his real head, for sure, but there’s something about his arm movements that look like keyframe animation. Maybe it’s the just frame rate of the video on Twitter.

What do you think of the new live-action look for Will Smith as the Genie? Love it? Hate it? Watch the TV spot and let us know your thoughts in the comments below!

Be sure to catch Disney’s live-action retelling of “Aladdin” when it flies into theaters on May 24, 2019.

D23′s Disney Fanniversary Celebration is back for...