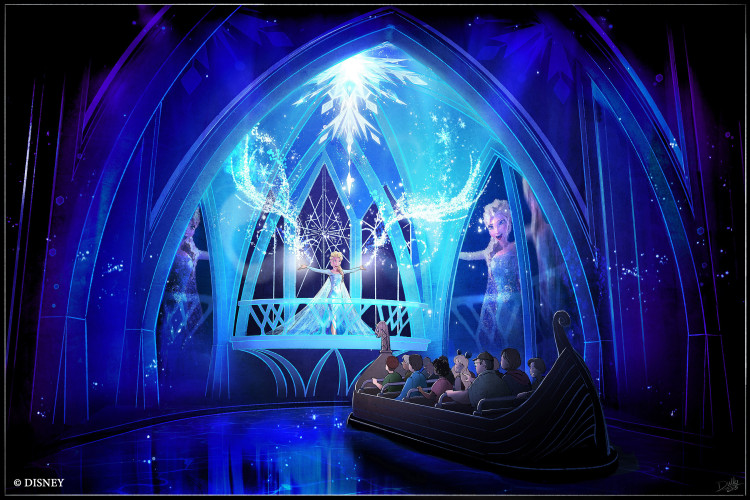 Frozen Ever After is just one of the new attractions debuting this summer across Walt Disney World.

We’ve just told you all about the new nighttime entertainment coming to Disney’s Animal Kingdom this Memorial Day, but Walt Disney World guests will find new experiences debuting across all of the resort’s theme parks during this summer.

Epcot, Hollywood Studios, the Magic Kingdom, and even Disney Springs and the water parks will all premiere new attractions to keep visitors occupied through the summer season, and we now have opening dates for some of these additions:

Anna, Elsa and their latest-generation Audio-Animatronics co-stars will welcome guests aboard the new Frozen Ever After boat ride that sails into a “Frozen” world at the Norway Pavilion. Passengers on their way to Arendelle’s Winter in Summer Celebration for Queen Elsa visit the ice palace and hear beloved film tunes plus new lyrics by Oscar-winning “Let It Go” songwriters Bobby Lopez and Kristen Anderson.
Also at Norway pavilion, Anna and Elsa will greet guests in the new Royal Sommerhus, modeled after a traditional Norwegian cabin.

In Future World, guests will celebrate the U.S. debut of the new Soarin’ Around the World attraction starting June 17 at The Land Pavilion. Now with a third Epcot theater, plus new digital screens and projection systems, the expanded attraction takes guests on an exhilarating “flight” above spectacular global landscapes and man-made wonders.

Here’s a brief preview of the new Soarin’ ride video. Note that this is not the music you will hear during the finished ride:

Soarin’ Around the World preview and filming for updated attraction

Guests will also find new additions at “Turtle Talk with Crush” beginning in early-May with characters from Disney•Pixar’s “Finding Dory”. When Crush the sea turtle swims up to the “Human Tank” at Epcot, he’ll be joined by Dory and some of her new friends that guests will get to know when “Finding Dory” swims into theaters on June 17, 2016.

For the first time, modern Disney characters Tiana of “Princess and the Frog,” and Rapunzel of “Tangled,” co-star with Anna and Elsa of “Frozen,” and a host of classic characters in the new Mickey’s Royal Friendship Faire. Performed on the grandest stage in the kingdom, the star-studded tale of friendship presents Mickey Mouse and his troupe of Merry Makers – Minnie Mouse, Donald, Daisy and Goofy – who invite 10 new friends from different animated worlds to join the celebration. This “timeless fairytale” of a show combines grand dance, fireworks and stunts with memorable music, an original song and special effects. This new show replaces “Dream Along With Mickey” show, which you can see the final performance of here:

The next generation of Star Wars-themed fireworks shows, “Star Wars: A Galactic Spectacular,” will premiere this June with new themed fireworks, lasers, special effects and video projections of iconic characters and scenes from the complete saga, all set to the iconic score of the film series.

Here are videos of the new stage show and parade:

As Disney Springs continues to expand and diversify its dining, shopping and entertainment, more high-profile tenants are coming onboard, including Anthropologie, Under Armour, kate spade new york, Sephora and Lucky Brand, among others. Other new shops opening in 2016 include Zara, Tommy Bahama, Lilly Pulitzer, UNIQLO and PANDORA. More than 30 new tenants will be coming to Disney Springs this summer, including retail shops and dining venues. More new eateries are gearing up to open in the coming year, including Tablas Frontera by Chef Rick Bayless; Homecoming – Florida Kitchen and Shine Bar by Chef Art Smith; STK Orlando, a modern steakhouse with the ambiance of a sleek lounge; Sprinkles, the world’s first cupcake bakery; Blaze Fast-Fire’d Pizza, a modern-day “pizza joint” with artisanal pies; and the re-imagined, Planet Hollywood Observatory with new outdoor terrace and live entertainment.

Finally, at Disney’s Blizzard Beach Water Park, Olaf from Disney’s animated hit “Frozen,” will be living his “In Summer” dream as he and Kristoff host The “Frozen” Games of friendly, fun competitions. Disney’s Typhoon Lagoon Water Park castaways can splash down on a sandy summer beach with a cold ale and savory snack after a wild slide on Crush ‘n’ Gusher water coaster.