A major announcement was made by Disney Parks about the official opening date of Star Wars: Galaxy’s Edge for Disneyland and Walt Disney World.

With Galaxy’s Edge opening at the Disneyland Resort on May 31st, Disney really has to perfect this area before its Phase 1 opening. This photo report, with aerial photos by NearMap, and on-the-ground shots by Disney/ABC News 7, showcases Star Wars: Galaxy’s Edge as it currently looks with just 12 weeks left until the grand opening.

This GIF showcases the changes that occurred from March 2018 to February 2019. The biggest differences that can be seen are the completed roofs, the newly-planted foliage, the finished Millennium Falcon, and addition of new concrete pathways. 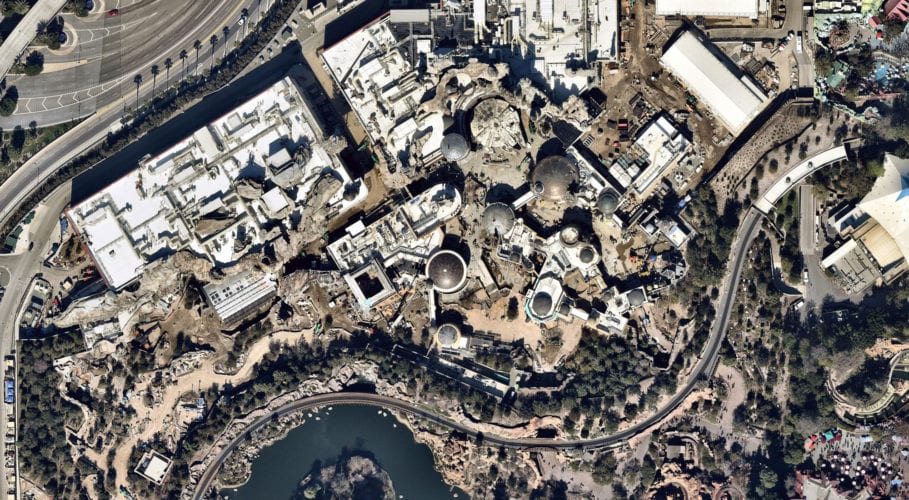 Here is the flat image, with an enormous amount of detail to look over. You can see two of the three main entrances, with the two visible being on the bottom right from Frontierland. The third entrance will be on the bottom left from Critter Country. 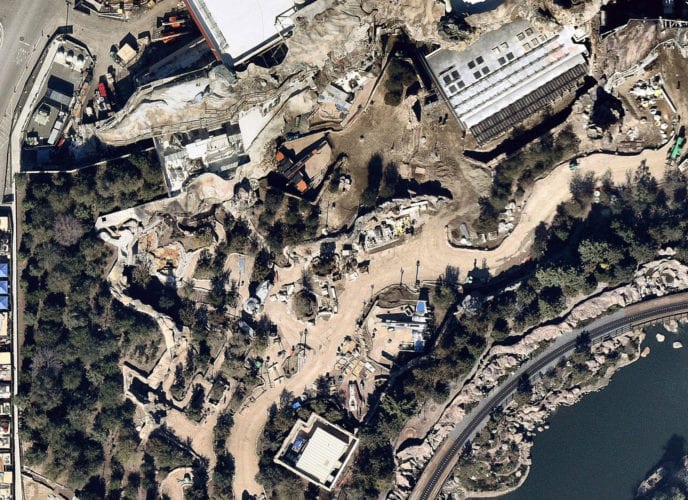 Zooming in on the Critter Country entrance, we see not one, not two, but four brand new ships! At the bottom center, we have an A-Wing and a Resistance X-Wing. In the center, we have Poe Dameron’s iconic orange and black X-Wing with the hard-to-see gray and blue transport ship above it.

Remember, according to Disney, these are 1:1 ratio ships. You’re looking at full-scale ships! This area is also the entrance to Star Wars: Rise of the Resistance, which will open as Phase 2 of the land. 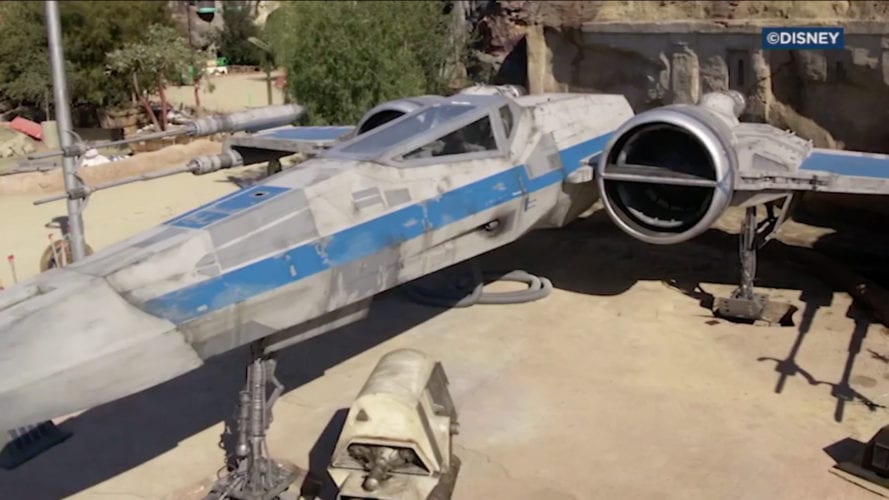 Speaking of those ships, here is a close-up on one of the Resistance fighter X-Wings! 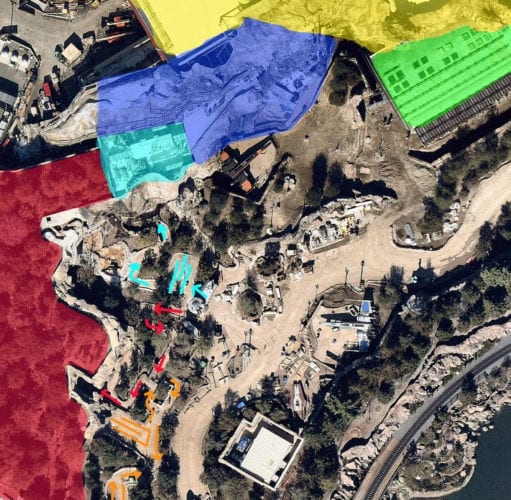 Now, let’s look at an operations standpoint for the Star Wars: Rise of the Resistance attraction.

Looking at standby first, we can see how RED will lead through the first bits of foliage from the Resistance Turret entrance.

ORANGE is where the extended-queue is most likely located. Looking at this image, it appears there is ample room to add switchbacks and lead partially toward the Critter Country entrance.

The remainder of the queue will be in the RED-SHADED area. Reports have stated that this queue will be themed around caves that have been dug out with laser-based equipment.

FastPass will use the TEAL way to enter. They also appear to have room for switchbacks in their queue.

Both queues will most likely meet at the merge point in the TEAL-SHADED area.

The pre show with Rey and BB-8 will happen near the BLUE-SHADED area, which will take quests by Poe Dameron’s X-Wing and into the gray and blue transport ship.

This will take guests “into space” as they are captured by the First Order. The YELLOW-SHADED area will be the actual ride itself, including the huge First Order hangar scene that guests will see upon exiting the gray and blue transport ship. To learn more about the rumored ride story, which does contain spoilers, click here. 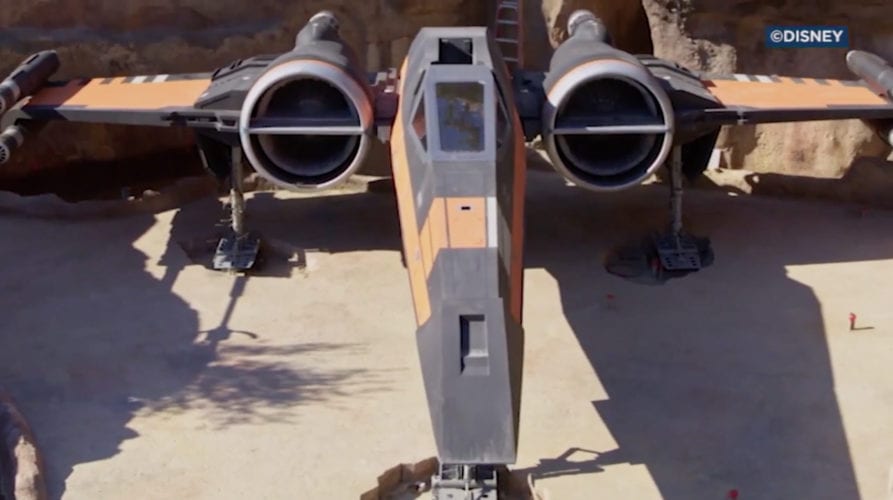 At some point in the queue, it appears that guests will get up-close and personal with this 1:1 scale recreation of Poe Dameron’s X-Wing fighter. 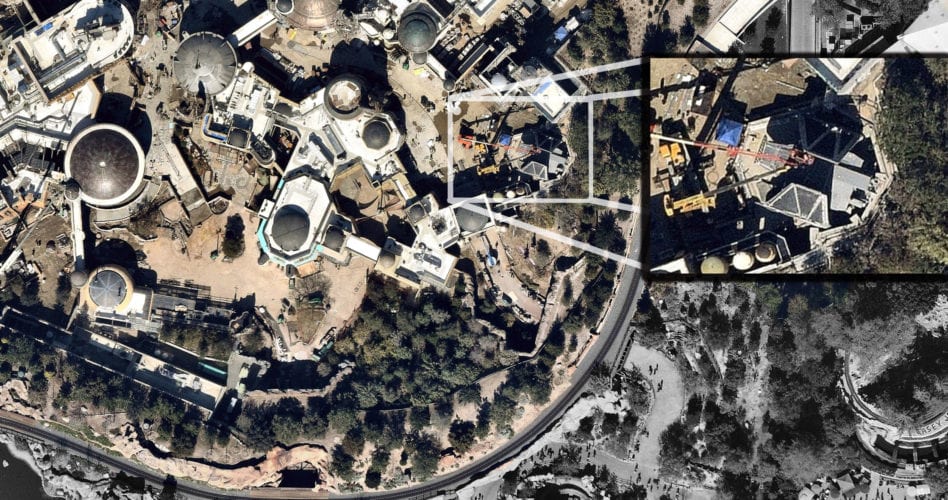 On the opposite side of the land, near the two entrances from Frontierland, we can see yet another ship. This First Order ship, called the TIE Eschelon, is massive, dwarfing the two cranes that are currently working on it. As the only major First Order presence in Galaxy’s Edge that we know of, expect this to be a fan-favorite area for people who love the bad guys.

This shot also showcases most of the Black Spire Outpost. These shops will contain the eateries Oga’s Cantina and Docking Bay 7 Food and Cargo, as well as the Droid Depot, Black Spire Outfitters, Toydarian Toymaker, the Creature Stall, the First Order Cargo shop and more!

The tree-heavy area on the bottom left seems to contain a hidden building in the elevated area. This, most likely, is a backstage section that could contain anything from storage to break rooms. 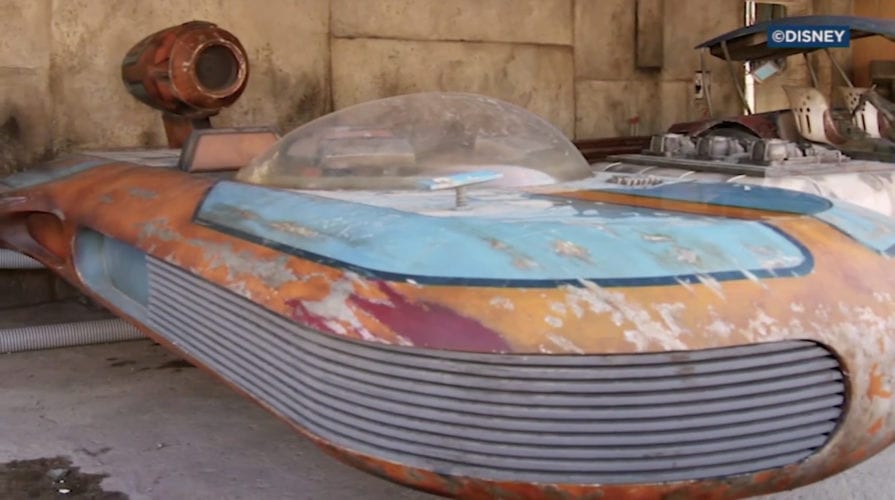 There is also this look at a very weathered landspeeder. At this time, we are not 100-percent sure what exact area of Star Wars: Galaxy’s Edge this speeder is in. 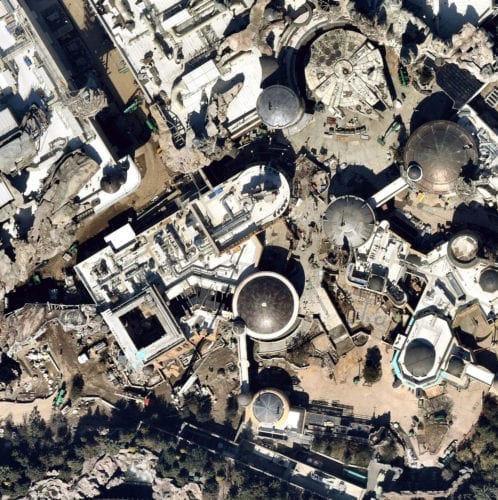 In earlier aerial photo updates we had assumed that guests would never be able to be get on the bridges or elevated sections for fear that this height would ruin the illusion of the land.

It appears we were wrong, as Carlye Wisel, a reporter for Travel + Leisure who got to tour the construction site, states,

“Though breathtaking at a distance – there’s even an outlook perched above that’ll guarantee picture-perfect Instagrams – gazing at it from up close through windows of the Millennium Falcon: Smuggler’s Run queue will tug at your heartstrings most.”

We can also see the Millennium Falcon in all of its glory. The concrete landing pad around the Falcon appears to be almost complete, with just a few small green cranes still sitting around.

The open-roofed buildings on the bottom left are expected to be the main marketplace area where guests can build lightsabers, assemble droids, get Sith Lord artifacts and more. 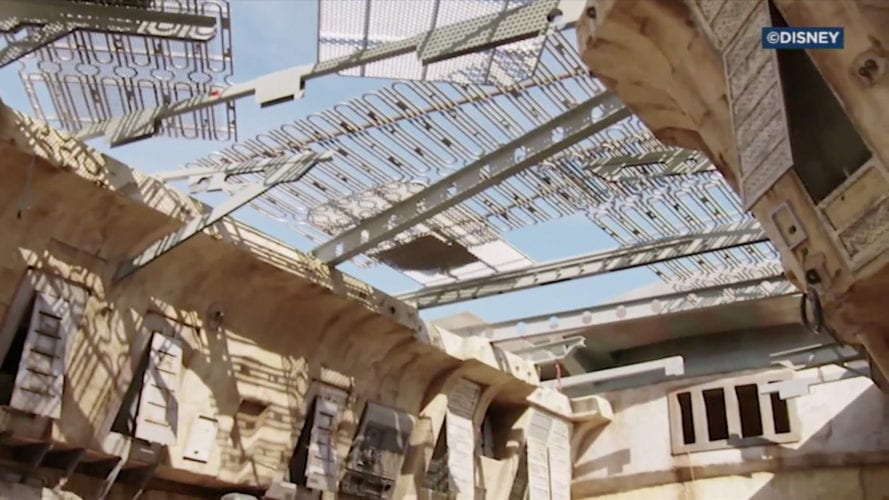 It was originally assumed that the open-roofed area would have an unseen glass top to allow shopping, even in the rain. This shot contradicts that idea, though, as it appears the roof is way more open than originally expected. We do expect more elements to be added to this rooftop, like themed tarps and banners, before the grand opening. 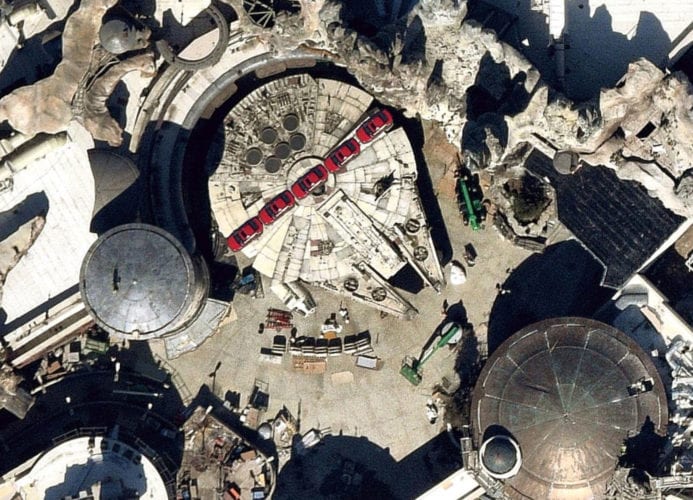 It’s important to stress the immense size of everything in the land. If you look at the large overview photo at the top of the article, you’ll see a tiny red sedan driving on the highway. Well, the Millennium Falcon is five of those back to back, and that’s the shorter side.

Yes, this land will have immense crowds when it opens, but this is not a small expansion in any way at all. This is, as stated by Disney, the largest single land expansion in Disney Parks history. Prepare for a whole new scale of theme park experiences. 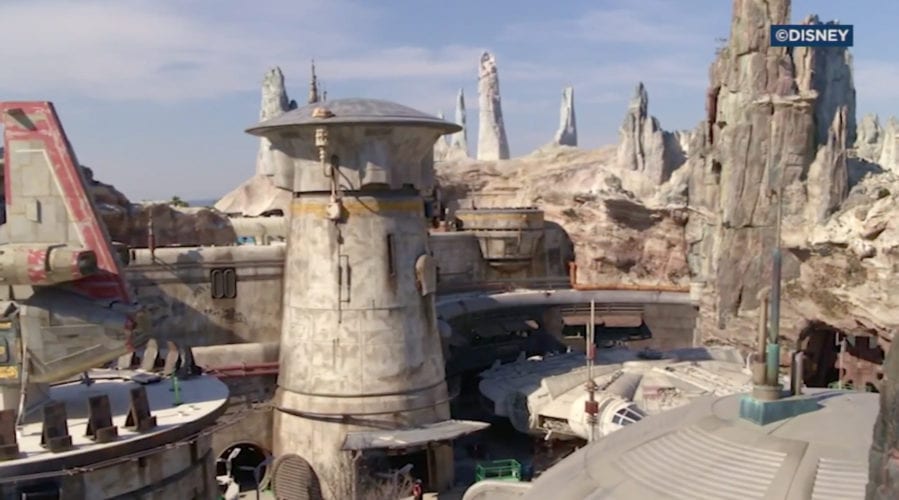 This shot looks like a computer-generated piece of concept art, but it is definitely not. This is real footage, from a very real land. We can see the top of the Millennium Falcon, with nearby second floor open windows that are looking out from the ride’s queue.

#EXCLUSIVE drone video of #StarWars Galaxy's Edge at #Disneyland. Opening to the public on May 31st. pic.twitter.com/EW71yKORl0

As always, unless stated by Disney themselves, the guesswork in this article is a rumor and should be taken as such. Park operation facts are something we will have to wait to see opening day, but for now, we do know the food, the merchandise, the ride queues and pre-show, the Cast Member costumes, and the opening dates for the land.

Also, be sure to check out these past articles about Star Wars: Galaxy’s Edge!