written by Tharin White November 27, 2018
Last time we looked over Disneyland, we saw the makings of the Millennium Falcon. Today, we are back, to see a completed look at the fastest ship in the galaxy! This photo report is made possible with screen captures from Disney Parks Youtube and helicopter aerials by Heliguy on Instagram. 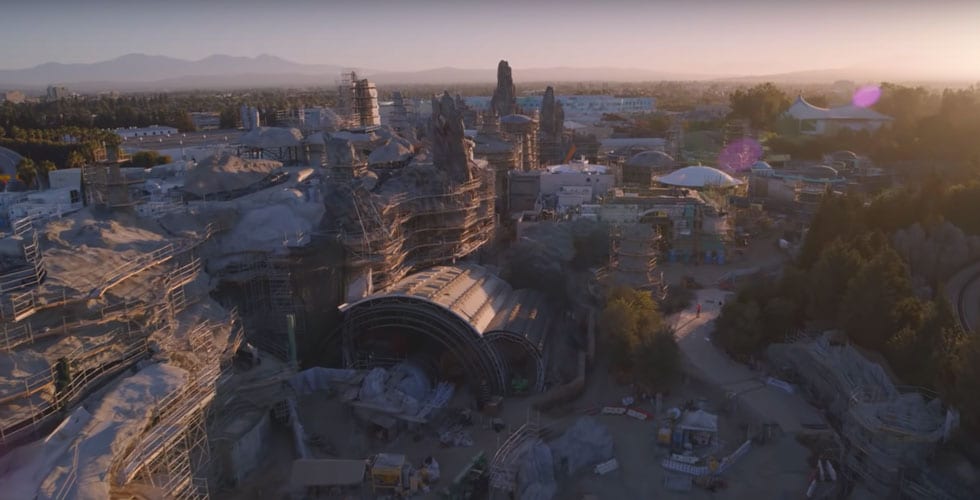 At the latest Destination D 2018 Event, Bob Chapek, Chairman of Disney Parks, Experiences and Consumer Products, revealed a ton of new details about Disney Parks. This included three unique looks at Star Wars: Galaxy’s Edge. In these videos we learned the new names of the attractions inside this land as well as hearing a new theme song made specifically for the land, by John Williams himself. 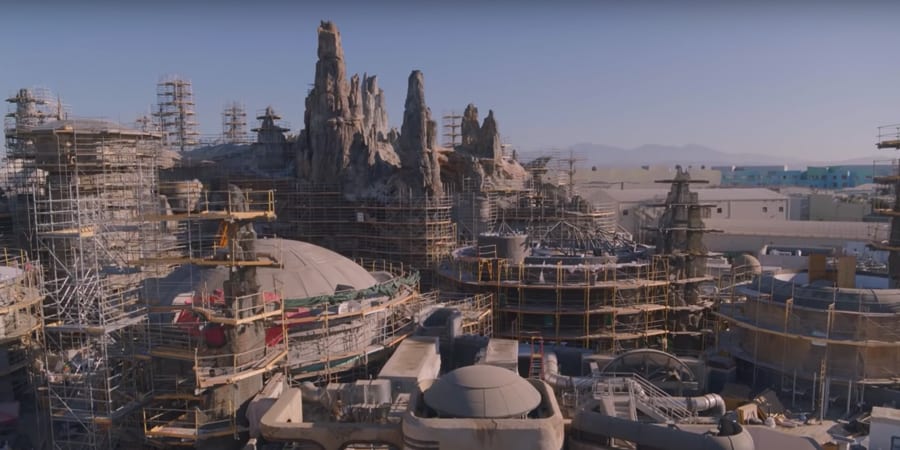 This land is going to be big, really big! In fact, according to Bob Iger, CEO of the Walt Disney Company, this will be the largest single land expansion in Disney Parks history. The land will based in the Black Spire Outpost, a town on the planet of Batuu.

Now, thanks to Heliguy on Instagram, we can see the entirety of Star Wars: Galaxy’s Edge at Disneyland. You can see how much of the city landscape has already taken shape. On the far left, Star Wars: Rise of the Resistance. On the right, Millennium Falcon: Smuggler’s Run. Both of these major attractions are expected to be game changers in the theme park world. From their size alone you can see the effort and money that Disney is pouring into this investment. 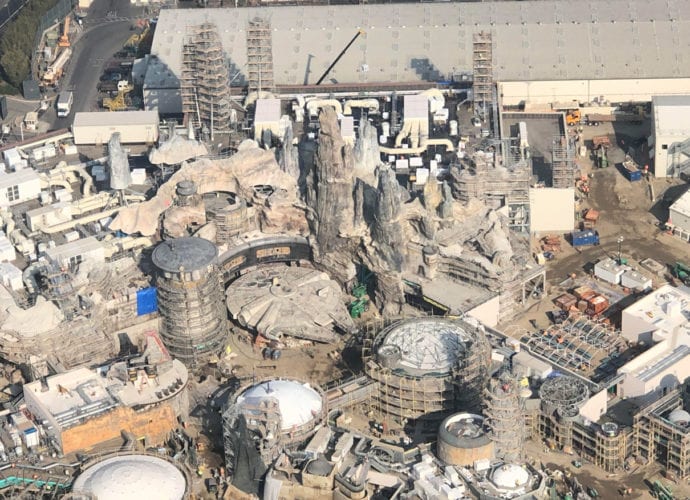 And, for the first time ever, we have a complete look at the finished Millennium Falcon! Upon opening, guests will be able to do a complete walking tour of the Falcon, as well as having the option to pilot the famous ship itself. 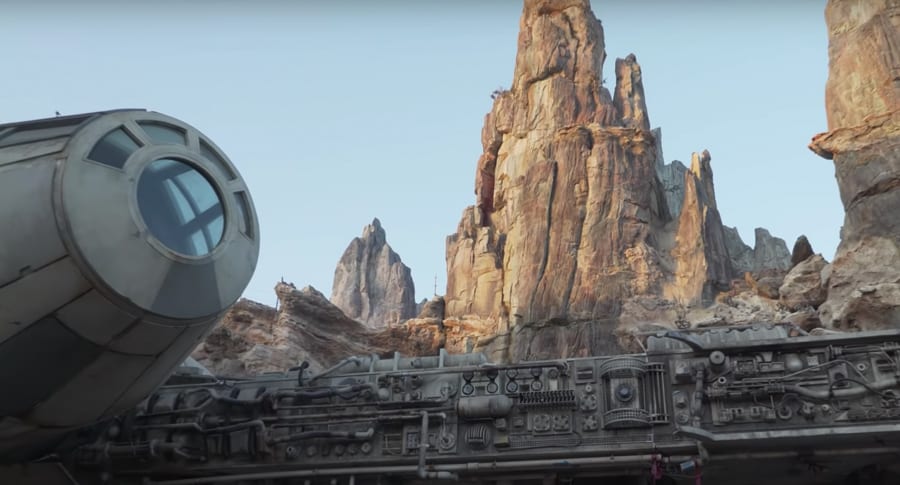 Disney also gave a grounds-eye view of what we can expect to see once Star Wars: Galaxy’s Edge is complete. 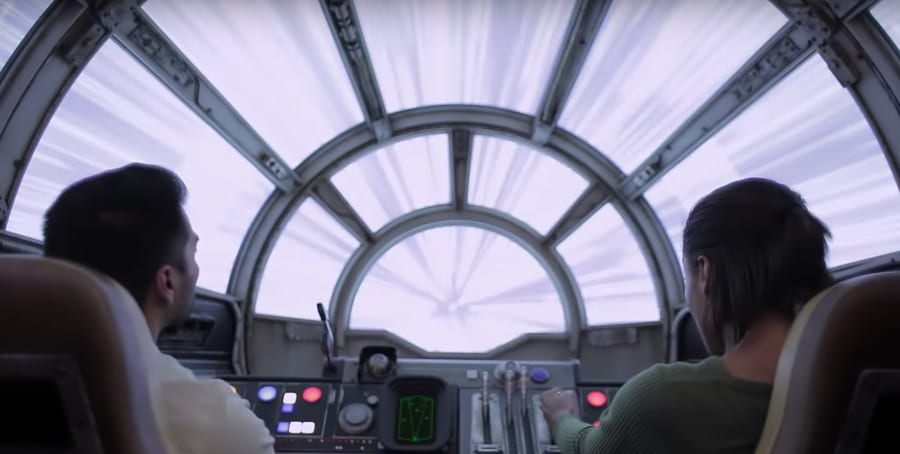 Guests will be split into groups of six for this outer space adventure. Each guest will be a part of a team, and together everyone will help complete a mission using the Millennium Falcon. Pilot, gunner, engineer? 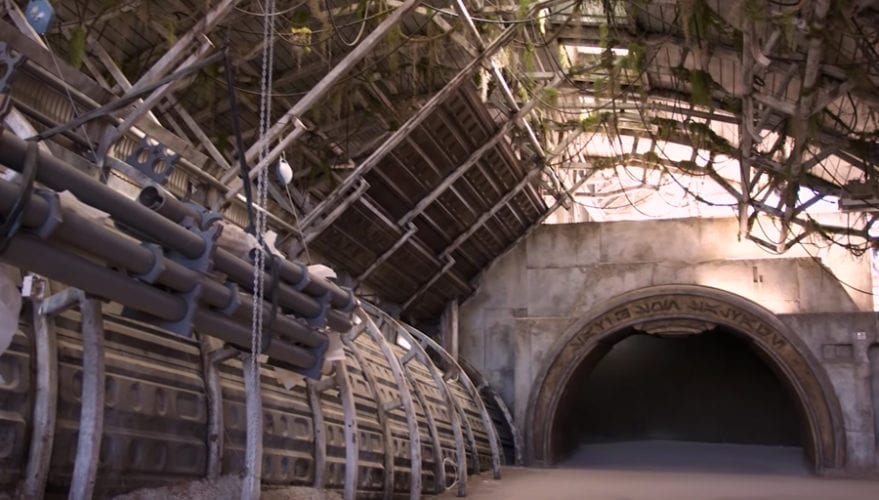 On the opposite side of the land is Star Wars: Rise of the Resistance. We presume that this area, pictured above, will be, or at least be near, the entrance to the attraction. Using a Star Wars language translator we were able to spell out “Savi & Son Salvage” (we are assuming that 3 stands for &). Please comment and let us know if you read something different. 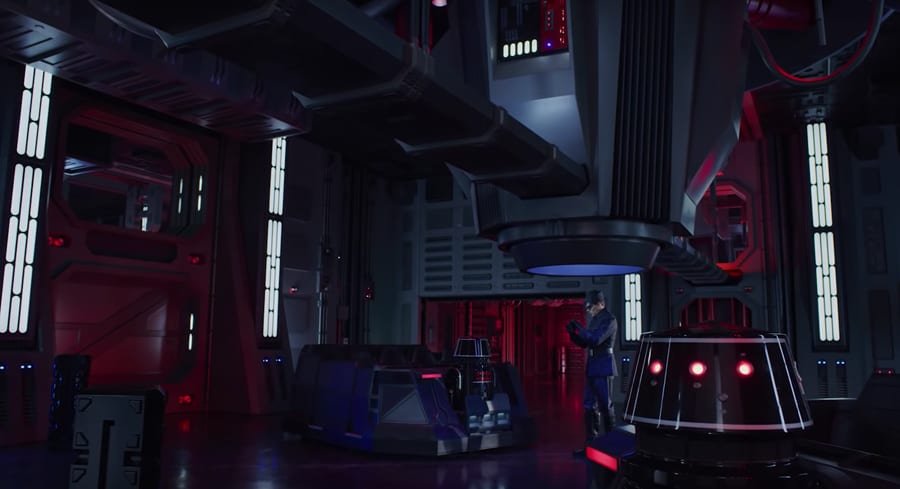 I am happy to say that you are not looking at concept art, but in-fact real footage of the inside of the attraction. Rise of the Resistance will place guests inside of a First Order Star Destroyer. While we currently do not know the full mission, we can be sure to expect some stunning visuals. The droid near the First Order captain is connected to the ride vehicle that guests will board. It has been rumored for some time that the vehicle will be trackless, and while Disney hasn’t officially confirmed, it is pretty obvious to see that is what type of vehicle it shall be. 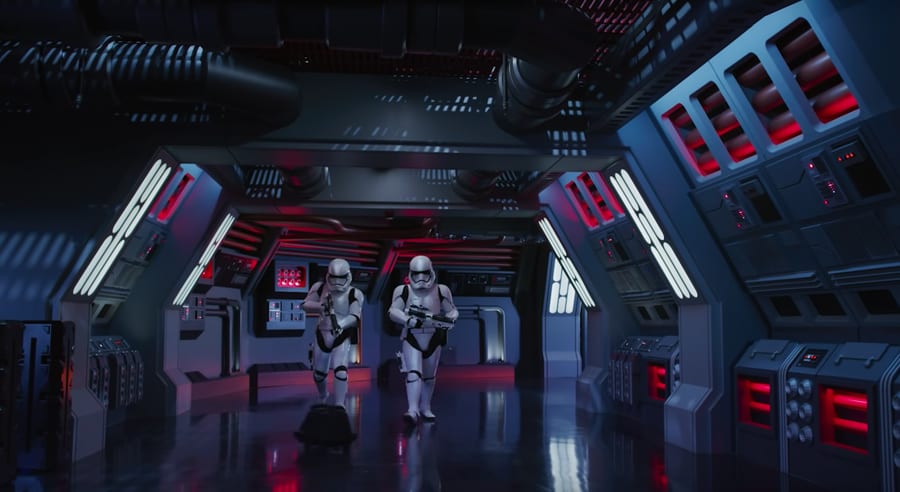 This attraction will place guests right into the Star Wars universe, with an expected 50+ Stormtrooper animatronics throughout the ride. 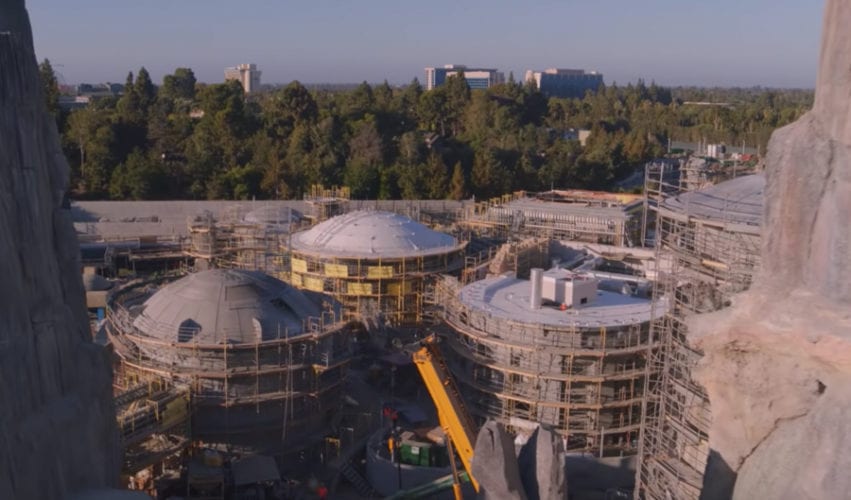 We still have to wait a few more months until the official unveiling of Star Wars: Galaxy’s Edge. But, early looks like this are giving us good faith in a land so many fans have wanted to enter since childhood.

Hello, I believe that the half pipe structure that you walk under will be the exit to the attraction, as somehow it is rubble from a spacecraft landed on batuu. In the D23 model, you can see a structure that is part of an old ship in the far western portion of galaxies edge, that is clearly divided into two parts: likely a fast pass and standby wait lines. From there you will somehow be transported through the queue to Death Star where the attraction will take place. Upon finishing and leaving your ride vehicle, somehow it will transport you back to batuu. That is just my suspicion though 🙂

I love your ideas! The ship wreckage being Fastpass and Standby makes a lot of sense. Now we must simply wait and see.

I wonder what the height requirements will be for both new rides. I’m sure it’ll be higher than the Toy Story rides. I’m guessing they’ll both be between “40-48”. I’m going to say that the Rise of the Resistance will have the higher height requirement, but i’m not sure. I wonder which one will be more popular or if they’ll be equally popular. I also wonder which one will be more thrilling.

Based on how the rides are described, I would assume Millennium Falcon: Smuggler’s Run would have the higher height requirement. Simply because of its simulator style of attraction, compared to the trackless vehicles we see for Star Wars: Rise of the Resistance, I would assume that Smuggler’s Run would be the more aggressive of the two. When it comes to popularity, I have no clue. While it appears that Rise of the Resistance will be the MEGA of the two attractions, it won’t be as interactive as Smuggler’s Run. Either way, opening day will surely bring out 6+ hour lines for both.

Although that may be correct, it’s just a rumor at this point. Disney has not announced a height requirement yet.

That symbol in the arch’s sign is an “enth” that means “ae.” It reads “SAVIAE SON SALVAGE.” That letter appears in Dosmit Raeh’s name and in “ROAEHAL” the word that is printed on both of Poe’s helmets.

The Falcon’s cockpit windows aren’t replicated well. In the photo above (5th one down) of the outside of the cockpit, the window frame width is about 1/2 the size of the glass. This Falcon would be very difficult to fly in some of the tight situations it has in the movies.

What lies beyond those unventured doorways and...